IN THE opening match of the Datuk Mokhtar Dahari Cup Football Championship 2019, SMK Dato’ Harun, Tanjung Karang’s Under-18 team defeated SMK Tinggi Kajang 1-0 to bag the Charity Shield Cup for the first time in the 6th edition of the tournament.

SMK Dato Harun’s midfielder Mohamad Firdaus Amir Nordin emerged as the hero after he scored the only goal of the match through a penalty kick in the 49th minute of the second half.

The Datuk Mokhtar Dahari Cup which began earlier this month, saw 576 Under-18 footballers take part in this year’s tournament, representing 32 teams from nine districts throughout Selangor.

Emran explained, “The main goal of the tournament is to identify and unearth new football talents so that they can be groomed to a higher level and be featured as state players to restore the glory of Selangor in the Malaysian football arena. 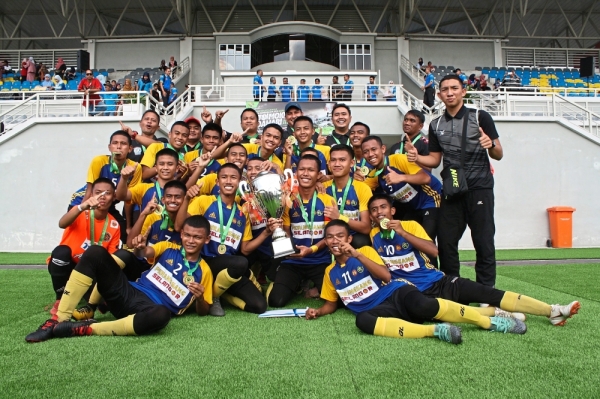 “The 2019 edition of the tournament maintains participation of secondary schools from 10 district education offices throughout Selangor which have been elected through the District Schools Sports Council (MSSD) Championship which ended in early May.”

The champion will receive a cash prize of RM10,000 as well as medals, certificates and championship trophy while the runner-up will bag RM7,000, third place RM5,000 and the fourth-place winner will take home RM3,000.

There will also be a Man-of the-Match award, Top Scorer, Best Goalkeeper and Best Supporters.

Kumpulan Perangsang Selangor Bhd is the main sponsor of the tournament for the sixth year.

In conjunction with the tournament, the Youth Development Unit of Football Association of Malaysia (FAM) will also organise a football clinic with the aim to provide exposure and basic skills to young footballers.