No stopping the tears: A sobbing Shalin as she reflects on her long years with the national bowling team at a press conference.

If all goes well, the 42-year-old is set to head to the US in April to compete the full season there.

For the new season, the PWBA Tour has lined up 12 tournaments until August which includes two majors namely the USBC Queens and US Women’s Open.

The three-time world champion Shalin believes by competing week in, week out there would help her adapt to the environment and subsequently bowl consistent enough to challenge for honours.

“The past few years, we went there on ad-hoc basis and would play in only three to four tournaments, ” said Shalin after a press conference to announce her decision to leave the national team yesterday.

“I think it makes a lot of difference for me to give it a shot at bowling the entire season there.

“Playing on PWBA Tour is nothing like any Open tournaments or official Games. Apart from playing against all the world’s best, you’ve got to adapt to the many aspects of the competition there.

“But I still have faith in myself. I’ve no doubts that I can win my first PWBA Tour title.

“I can still compete at the highest level, as long as I take good care of my body condition and stay healthy, as well as have the right support. In 2019, I did quite well (to finish 14th out of 192 competitors) at the USBC Queens, so that speaks volumes.”

Shalin said she will bring her daughter Aleya, 9, there for the Tour.

“Four months is a long time and I don’t want to be away from my daughter. I will be taking her with me and homeschooling her for the time being, ” said Shalin.

“That’s one of the reasons why I decided to retire from the national team. If I’m still there, it’s not possible for me to just compete in US for the whole season.”

She came close to triumph at the 2008 US Women’s Open by coming in third.

Meanwhile, Shalin could not hold her tears as she paid tribute to those who had been part of her 28-year trophy laden career.

And it was head coach Holloway Cheah, fondly known as ‘Ah Sir’ and her teammates, as expected, earned a special mention.

“Thank you ‘Ah Sir’ for all the knowledge you have taught me since I was nine right until I’m 42. It’s you who made me the athlete I am today, ” said Shalin.

“Ah Sir and I have gone a long way. If not for him, I would not have returned to the national team (after a fallout with Chris Batson). He guided us to countless titles, it’s not easy for him to handle such pressure at such age (78).

“And to all my teammates, whom I regard as family, we have gone through together triumphs, defeats, tears and laughters, thanks for being with me throughout this wonderful journey.

“I hope all of you will continue Malaysia’s legacy as one of the bowling powerhouse in the world. The foundation has been built by the seniors before me, ” she added.

Shalin – legends never die, they move on to bigger things 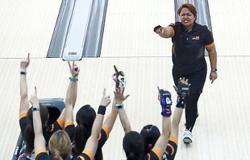