PETALING JAYA: Septuagenarian Holloway Cheah has hailed Shalin Zulkifli (pic) as one of the greatest ever in Malaysian sporting history as he paid tribute to the long-serving kegler who quit the national team yesterday.

The 78-year-old head coach said what Shalin has achieved in her 28-year illustrious career will be hard to emulate by any athlete in the country.

“She has won everything that sport has to offer. She conquered South-East Asia, Asia and the world. Not many had done that for the country, it goes without saying she’s one of the greatest of all time alongside the likes of Nicol David, ” said Holloway, who saw the rise of Shalin having served the Malaysian Tenpin Bowling Congress (MTBC) since 1991.

“If only bowling is in the Olympics, then we wouldn’t have to wait for our first gold until today.”

Holloway admitted he was stunned when Shalin met him to hand in the resignation.

“I didn’t see it coming, not at least so soon, ” he said. “She said she wanted to further her studies.

“We’re going to miss her. She has left a big void for MTBC to fill. It’s easy to fill up the vacant spot in the team, but to get someone to replace the role and influence she brings is going to be difficult because she’s one of a kind.

“Just look at how she bowls, how she fired up her teammates and how she struck fear in her opponents.

“I still remember vividly how she defeated (Indonesia’s) Tannya Roumimper to win the Masters gold at the 2017 Kuala Lumpur SEA Games.

“She has the character that is good for bowling, otherwise the sport will be boring.”

Teammate Esther Cheah revealed that she could not keep her emotions in check right after learning about Shalin’s resignation.

However, the 34-year-old Esther, who’s the second most senior member in the team and played alongside Shalin since the mid-2000s, said she wasn’t surprised.

“Sort of saw it coming as we’ve had conversations about it in the past.

“Even so, having Shalin officially retiring from the team hits you differently in the heart no matter how much you’ve prepared for it.

“I teared up when I read about it in the papers this morning. Then I cried when she met us before training.

“She’s known me since I was a kid, from hiding behind the bleachers at Kent Bowl to watch the national team bowl to being teammates and sisters. We’ve won many world, Asian, and SEA titles together.

“It’s hard to accept that our ‘kakak’ won’t be with us anymore but life goes on.

“She’s made a decision to move in a different direction and I respect and wish her all the best, I truly do.

“I hope she gets to fulfil all the things she’s put on hold because she was proudly representing the country.”

Another teammate Sin Li Jane said: “It’s sad that she’s retiring from the team. It’s not an easy decision for her to make.

“However, I totally understand and she’s doing what’s best for herself. She has been the role model for everyone and we all call her a legend.

“She has sacrificed a lot for the nation. I wish her all the best.” 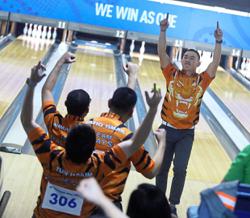