PETALING JAYA: Nguyen Tien Minh (pic) is just four months shy of his 40th birthday but the grand old man of Vietnam badminton is not slowing down.

Having been in the business since the days of his great contemporaries Lin Dan of China and Malaysian legend Lee Chong Wei, the Ho Chi Minh City-born shuttler is still globe-trotting to play in tournaments.

Tien Minh, who was ranked as high as world No. 5, has the distinction of beating Lin Dan and Chong Wei once each in his career.

A bronze medal in the 2013 World Championships was the highlight of his career and the shuttler also had won 10 Grand Prix titles (BWF international titles before the new tour events were introduced).

Tien Minh played at the just concluded Vietnam Open but was unlucky to lose in the first round to eventual runner-up Sun Feixiang of China. Feixiang lost 10-21, 21-14, 21-17 to Kodai Naraoka of Japan in Ho Chi Minh City yesterday.

“I’m happy that my fitness level is on par with the rest, after all these years,” said Tien Minh who is in Malaysia to compete at the ongoing Purple League.

He is playing for the Ho Chi Minh City Badminton Club (HCMCBC) at the Malawati Stadium in Shah Alam and yesterday he defeated Kittipong Imnark 11-2, 8-11, 11-7, 6-11, 11-8 in the second men’s singles but it was not enough to stop Sena Bangkok Club (SEBC) from walking away with a 13-9 win.

“I can’t wait to play better than this and help my team in this tournament. Despite my age, I have to thank HCMCBC for including me in their team,” added Tien Minh. 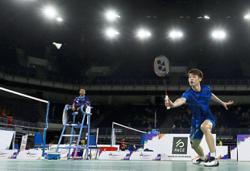