WORLD champions Takuro Hoki-Yugo Kobayashi of Japan have set their sights on becoming the world No. 1 for the first time after capturing the Malaysian Open men’s doubles title in style.

They had also beaten Fajar-Rian in the final of the Thailand Open in May but then, the Indonesians were forced to concede a walkover due to an injury to the former.

With their second title this year, Hoki-Kobayashi have inched closer to the current world No. 1 Marcus Fernaldi-Kevin Sanjaya of Indonesia who have been hampered by injuries and poor form and have not won any titles this year.

The duo had pulled out of the home tournament at the eleventh hour, citing an injury to Marcus.

“We are really happy to win this title. Now, we want to try to get the No. 1 spot. We have to maintain our form to do so,” said Hoki.The win was also a tonic for the Japanese as they prepare to defend their world title on home soil from Aug 21-28.

On their chances at the world meet this time, Hoki said: “Of course we want to defend our title but it will be tough as the men’s doubles is really competitive. We have two months to prepare.”

The disappointment of Fajar-Rian was made up for by Apriyani Rahayu-Siti Fadia Ramadhanti when they captured their first World Tour title as a pair after a hard-fought 21-18, 12-21, 21-19 win against China’s Zhang Shuxian-Zheng Yu in a pulsating 71-minute battle.

The duo were only paired this year after Greysia Polii’s retirement from the sport in March and were thrilled to win their first major title together.

“We are really happy with this breakthrough but this is only the beginning for us. We are still learning and growing together as a pair and there is a long road ahead of us to reach the top,” said Apriyani.

“We will continue to work hard and try to win more titles together.”

In the mixed doubles, China’s world No.1 Zheng Siwei-Huang Yaqiong continued their formidable form, winning their fifth title in a row.

They needed only 35 minutes to beat Thailand’s world No. 2 Dechapol Puavaranukroh-Sapsiree Taerattanachai 21-13, 21-18 in the final yesterday. 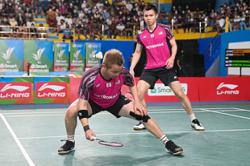