Tat Meng resigns from South Korea, will he return to Malaysia? 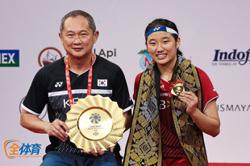 BANGKOK: Will Wong Tat Meng (pic) return to Malaysia as a coach to boost the women’s singles department?

Tat Meng has ended his stint with South Korea on a high after three years and five months working as the singles coach.

In his last stint as a coach here in Bangkok, his players made him proud by lifting the Uber Cup title after 12 years.

They defeated China 3-2 in a thrilling tie at Impact Arena on Saturday.

Although Tat Meng’s contract runs until end of this year, he has chosen to resign but did not want to reveal the reason behind his decision.

“I’m just happy to leave the team with such memorable and fantastic result at the Uber Cup,” said Tat Meng, who is seen as the man behind the rise of the 20-year-old An Se-young.

“I did not tell the team earlier as I did not want to distract them.”

His resignation comes in the wake of South Korea appointing former top singles player Sung Ji-hyun into their coaching team this year.

“There have been so many memories. I’ve made good friends. They have really looked after me well. It was a good experience for me, and I’ve learnt much as a coach too.”

Asked whether he would consider Malaysia if they approached him, Tat Meng said:”I have not made any decision right now. I just want to take a few weeks to rest first.”

There is a vacancy for women’s singles coach in Malaysia following the resignation of coach Indra Wijaya in January.

When Tat Meng was the coach with Malaysia before, Wong Mew Choo was in her peak form, and did well to win the China Open in 2007.