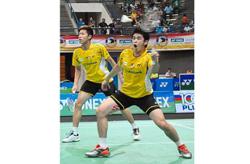 It was the second pleasant news within a month for Jin Wei after she was given the green light to turn professional by the Badminton Association of Malaysia (BAM), although she was initially banned for two years along with men’s singles ace Lee Zii Jia.

The decision by the national body triggered a public uproar as many felt the duo were harshly treated.

Both Youth and Sports Minister Datuk Seri Ahmad Faizal Azumu and deputy Datuk Seri Ti Lian Ker stepped in to intervene on the matter, prompting the BAM to lift the ban in just a matter of days.

The BAM had previously given Jin Wei their blessings to leave the national team on the assumption that she had announced her retirement – a decision that she eventually regretted months later.

Jin Wei left after taking two years to recover from a stomach ailment.

She was grateful for Sunlight Group’s backing and vowed to justify their faith in her.

“Thank you Li-Ning for giving me the opportunity to continue to strive for more glory for the country as a professional player,” said Jin Wei, who’s also a KLRC player.

Jin Wei is keeping her fingers crossed that she will make the cut for at least one of the two upcoming World Tour tournaments in Europe.

She has signed up for the Swiss Open from March 22-27 and Orleans Masters in France from March 29-April 4.

“For the Swiss Open, I’m currently seventh in the reserve list, so I guess it’s going to be very hard for me to get in,” said Jin Wei.

“But I’m hopeful of making the Orleans Masters. We’ll see. I can’t wait to get cracking as a pro.” 2014 doubles winner Khim Wah still has much left in the tank at 33
Business as usual for Kean Yew at World C’ships despite threat from Zii Jia
Lucky break could be breakthrough for Tze Yong
Chong Wei and Co out to show fans they still have the chops
Playing in mixed doubles has its perks for Joo Ven
Chong Wei dares players of this era to beat his record
Retirement not on veteran Rasmussen’s mind as he dreams of making history
Zii Jia will not dwell on the past, focused on assignment at hand
Good chance for isolated quintet to see action
Malaysian trio relish working under coach Joo-bong