PETALING JAYA: If there are fans who think Malaysia can just power through minnows Canada 5-0 in their Thomas Cup Finals opener today, they better think again.

Expect the Canadians to give Malaysia a good fight when the two sides in Group D meet at the Ceres Arena in Aarhus, Denmark, today.

The Pan-American champions will be out to steal a point in the first singles as their teen prodigy Brian Yang appears to be on a roll since the Tokyo Olympics.

It marked his second notable win after having also upset Asian Games champion Jonatan Christie during the Sudirman Cup group stage against Indonesia.

Brian had in fact been strutting his stuff since the Olympics when he nearly sent second seed Chou Tien-chen of Taiwan packing in the group stage.

With Brian looking to be a potential threat in the the crucial opening match, Malaysia are expected to take no chances like Japan who rested their ace Kento Momota, and throw in world No. 8 Lee Zii Jia into the line-up.

“Against Canada I think Brian Yang will be a challenge, he had good performances recently,” Zii Jia told the Badminton World Federation’s official website.

“We can’t look down on Canada, we have to give our best.”

Brian has attributed his rapid rise to his training stint with the Peter Gade Academy and world No. 2 Viktor Axelsen in Dubai.

“I’ve been training in Denmark for the last two months, and I also was in Dubai with Viktor, and I’ve experienced different kinds of training styles, with shorter intervals and more explosive footwork and shots,” said Brian in a post-match interview with the BWF.

“I’ve been trying to simulate that in the training sessions with the Canadian team here and I think it’s been good.

“I’ve been keeping my fitness level up, without dropping, and it’s kind of the key to keep this form.” 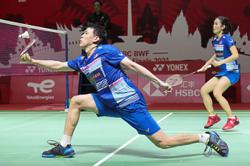