World No. 82 Tze Yong to play without fear if given the chance

No room for ego: Ng Tze Yong is keeping his feet firmly on the ground although he has emerged as the most improved back-up member.

PETALING JAYA: It’s normal for a young player to want to prove himself – and Ng Tze Yong is no different.

The world No. 82 Tze Yong is rubbing his hands with glee over the prospect of playing against a world top 20 opponent for the first time in his debut Thomas Cup Finals in Aarhus, Denmark.

Barring any surprise decision, the 21-year-old will most likely feature in both ties against Japan and Canada in Group D this week.

But it’s the clash with Japan that excites him the most as he could be pitted with the likes of world No. 13 Kanta Tsuneyama or No. 16 Kenta Nishimoto, should he fill up the second or third singles role.

“I’m very excited for sure (if I get to start against Japan),” said Tze Yong.

“I have never played a world top 20 opponent before, so this is a good chance for me to gauge where my current playing level stands against the world’s best.”

Tze Yong has beaten South Korean Lee Hyun-il and Indonesia’s Sony Dwi Kuncoro before but it was when the former No. 1s were going downhill in their careers.

Tze Yong won his first senior title by beating Hyun-il at the Australian International Open but the Korean retired due to injury in the second game. He has beaten Sony, when the latter was ranked 138th in the Indonesian International Challenge semi-finals in 2019.

“Of course, if I’m given the chance to play, I’ll not only go all out to give a good fight, but I want to beat them.

“When you have the courage and play with no fear, then you’re capable of doing anything.”

Tze Yong, however, is keeping his feet firmly on the ground although he has emerged as the most improved back-up member in the men’s singles department over the past one year.

Not only did he win the BAM Invitational Championship last year, he has also proven himself by winning the sixth-tier Polish Open in March.

Also, if his internal ranking tournament performance last month is of any indication, Tze Yong should be unofficially ranked second behind world No. 8 Lee Zii Jia.

Tze Yong is under no illusion that he would be an automatic starter in the Finals.

“I have produced better results than my teammates recently, but I’m still below them in terms of ranking,” he said.

“I have done my best to put myself in a good position for selection but it’s the coaches’ call.

“My task is to be ready and play a prominent role, be it in the second singles or third. I have only one goal – to win a point for the team.”

Christo on track to be world beater, says Axelsen

Revenge is sweet for Eoon even after three years 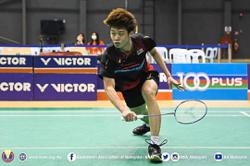 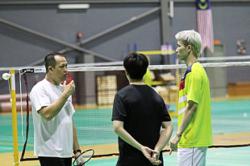 June Wei finally finds luck to win in Lucknow
Will Zii Jia stay at BAM or will he turn professional?
Choong Hann: It will be a huge loss if he leaves
Is Zii Jia at a crossroads in his badminton career?
Tze Yong must work on keeping full focus in a match
Choong Hann may see fit to let Letshanaa loose at Asia Team C’ships
Jacky left wondering after French wonderkid denies him title in Estonia
A roaring threat
Tang Jie-Yen Wei in a final they can’t afford to lose
$indhu cashes in on complete package