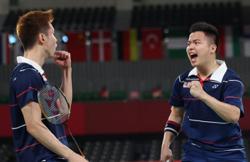 Star performers: Olympics gold medallists Apriyani Rahayu (back) and Greysia Polii of Indonesia are expected to deliver the points in women’s doubles. — AFP

While it was smooth all the way for the Sudirman Cup team led by Lee Zii Jia, the squad from Indonesia had a scare before landing at the Helsinki Airport International on Wednesday.

The plane they were in failed to land on the first attempt even after coming close to the runway. All was well the second time around.

“Yes they had some hiccups while landing but the shuttlers are safe,” said one of the team officials.

The arrival may be bumpy but Indonesia are one of the favourites to win the Sudirman Cup starting on Sunday in Vantaa.

With a good depth in both the men and women’s side, they are expected to challenge China and Japan for the world mixed doubles title.

They will be banking on their Tokyo Olympics gold medallists Greysia Polii-Apriyani Rahayu to get the points in the women’s s doubles and will count on world No. 4 Praveen Jordan-Melati Daeva in the mixed.

“We arrived here safely without any mishaps. The weather is cool but we are staying inside mostly. We’ve had our first practice and so far, all is good,” said Choong Hann.