PETALING JAYA: National doubles shuttler Soh Wooi Yik’s career would have ended prematurely if not for the intervention of a former great and a professional club.

And yesterday, the 23-year-old, who won a bronze with Aaron Chia in their first Olympic Games outing in Tokyo, took time to appreciate Malaysia’s former national coaching director Morten Frost and Looi Badminton Academy for playing their roles when he was at his career crossroads. 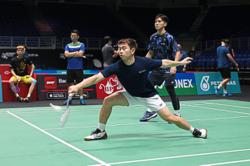 Pearly back to light training and looks good for Europe trip
Liek Hou gets timely warm-up at pro league ahead of worlds
Vietnam veteran out to prove he can give others a run for their money
Jin Wei fails to win in Vietnam, but coach says she’s on right comeback trail
Michelle back with BAM to oversee national centre
Jin Wei can end long wait for first World Tour title
Tough times don’t last but tough people like Teo-Ong do
Slow start with Low but Liu Ying keeps hopes high
New sponsorship spurs Cheam and Goh to advance
Sze Fei-Izzuddin eye vital points in Europe to make World Tour Finals cut