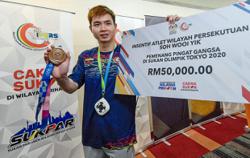 PETALING JAYA: Home jinx has struck Japan as almost all their players have packed their bags in the Olympic Games without winning any medals but China stayed cool to assure their first gold in badminton.

Their other men’s singles player Kanta Tsuneyama went down 18-21, 14-21 to Anthony Ginting of Indonesia.

Lee Yang-Chi-lin became Taiwan’s first men’s doubles pair to reach the semi-finals in the Olympics and will take on Ahsan-Hendra next.

Japan’s challenge for a gold medal in the mixed doubles is over when two-time All-England champions Watanabe-Arisa Higashino went down fighting 23-21, 15-21, 14-21 to Wang Yilyu-Huang Dongping of China in the semi-finals yesterday.

China are assured of a gold medal as Yilyu-Dongping will take on compatriots and world No. 1 Zheng Siwei-Huang Yaqiong in the final today.

In the women’s doubles, Japan’s challenge is also over with the defeats of Mayu Matsumoto-Wakana Nagahara and Yuki Fukushima- Sayaka Hirota in the quarter-finals.

Japan, however, saved their blushes in the women’s singles as both Nozomi Okuhara and Akane Yamaguchi have made it to today’s quarter-finals.

Okuhara plays He Bingjiao of China while Akana squares off with P.V. Sindhu of India.

At the last Olympics in Rio, Japan won one gold through women’s doubles (Misaki Matsutomo-Ayaka Takahashi) and a bronze in women’s singles (Okuhara).