PETALING JAYA: Independent shuttler Liew Daren (pic) is relishing the prospect of a face-off against world No. 1 Kento Momota, who is set to return at the All-England next week.

The 33-year-old Daren may cross path against the Japanese singles star in the second round at the Arena Birmingham.

Momota has not featured in any international tournament since he was involved in an accident following his Malaysian Masters triumph in Kuala Lumpur in January last year.

After being crowned the Japanese national champion for the fourth time, Momota was slated to return in January for the Asian leg of World Tour in Bangkok but was forced to abandon the trip after being tested positive for Covid-19.

“Well, in order for that (match against Momota) to happen, I must first get my job done in first round, ” said the world No. 33 Daren who is making his fifth All-England appearance this year.

“It will be great to be among the first few players to possibly face Momota on his first return.

“I have not taken even a game off him yet!” added the 2012 All-England quarter-finalist.

Daren has faced Momota four times to date, including their maiden meeting – the semi-finals of the World Championships in Nanjing three years ago.

“The closest encounter agains him was (in the first round) at the Indonesian Open in 2019. I was leading the first game 16-12 and held a game point at 20-19, but ended up losing, ” Daren recalled.

Daren knows his first match against world No. 30 Prannoy won’t be easy either.

This is despite Daren had beaten Prannoy three times in the past 14 months, including the recent straight games victory at the second Thailand Open in January.

“Having won our last three meetings, I’m expecting him to raise his game.

“So, I can’t take anything for granted despite having a favourable record of late, ” he said. 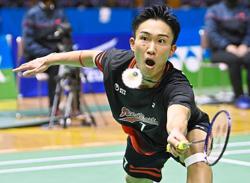