It’s Datuk Rashid and Datuk Cheah from now on

Heroes from the successful 1992 Thomas Cup-winning campaign, the duo were among the 81 individuals awarded the PMW award, which comes with a Datukship by the Yang di-Pertuan Agong Al-Sultan Abdullah Ri’ayatuddin Al-Mustafa Billah Shah.

However, the dates for the conferment ceremony will only be decided later because of the Covid-19 situation.

Rashid was the former No. 1 men’s singles player for Malaysia and achieved the high of winning the bronze medal at the 1996 Atlanta Olympics.

The youngest of the famous Sidek brothers, Rashid beat the then world champion Hariyanto Arbi of Indonesia in the third place playoff to become the first Malaysian men’s singles Olympic medal winner.

Rashid served as the national coach in the Badminton Association of Malaysia (BAM) from 2003-2015.

He joins his elder brothers Jalani, Razif and Misbun to be awarded Datukships.

Rashid is now the advisor for the Nusa Mahsuri club founded by the Sidek family.

Soon Kit formed one of the top men’s doubles pairs in the world in his heyday with Yap Kim Hock.

The duo settled for Malaysia’s first Olympic silver medal in Atlanta after a close defeat by Indonesia’s Rexy Mainaky-Ricky Subagja in the final.

Soon Kit was the national women’s doubles coach from 2001-2007 and was responsible for grooming Chin Eei Hui-Wong Pei Tty into the country’s top pair.

Soon Kit rejoined the national set-up in 2016 before heading the men’s doubles department and helped groom the current No. 1 pair Aaron Chia-Soh Wooi Yik before leaving at the end of 2018.

“Legends in their own right. Both of them deserve the recognition as members of the triumphant 1992 Thomas Cup-winning squad and their significant contribution to the development of badminton in this country, ” said Norza. 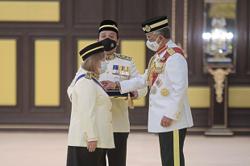