And he believes if the lefties are groomed from young in a right way, they can be an asset to any national team.

The 52-year-old Rashid knows it as he had faced several left-handed former greats like China’s Yang Yang, Zhao Jianhua and Denmark’s Poul-Erik Hoyer Larsen during his era in the late 80s and early 90s.

In fact, the two-time world champion Yang Yang was the first left-handed player to win in the oldest tournament - the All-England when he became the champion in 1989.

Yang Yang was also the first left-handed world champion in 1985 and went on to defend it in 1989.

“There were not many lefties during my time but those who made it to the top, were exceptionally good, ” said Rashid.

“Yang Yang, Jianhua, Poul-Erik were a nuisance to me during my playing days. It was hard to play against them as they were tricky and deceptive with their shots. I had to really bring out the best in me to beat them.

“They thought in a different way and their ideas varied. Some of their cross-court shots were crazy!

Rashid, however, said the main reason why it was difficult to play against a left-hander was due to lack of practice.

“As the percentage of the left-handers are smaller, we used to practise more against left-handed players and are trained to beat them, ” he said.

Rashid said more lefties had come through since his playing days and they had spiced up the world of badminton.

“Lin Dan of China (five-time world champion and two-time Olympics gold medallist) is one exceptional star. When a leftie is good, he tends to dominate for a while, ” said Rashid.

From his observation, Rashid said a combination of left and right players worked best for doubles, and highlighted China’s Fu Haifeng. Haifeng ruled for a long time with his first partner Cai Yun and then Zhang Nan, whom he won the Olympics gold at the 2016 Rio edition.

“Soon Kit also did well with his left-handed partners Beng Kiang and Kim Hock. And remember how Boon Heong dominated for a while with talented Koo Kien Kiat.”

“Anita is one-of-a-kind. She is right-handed but can also switch to left if she wanted to. It comes natural to her, ” said Rashid.

“When I was a junior, about 14, I remember one of my senior players Nik Azihan. He used to serve with his right hand and play with his left. He used a high-flick serve, so he had time to switch hands... it was hilarious at that time.

He hoped the Badminton Association of Malaysia (BAM) would make good use of their left-handed players.

“It’s good to hear that there are a few left-handed juniors in the team. It’s good to have a mix. They can be good sparring for right-handed players too, ” he said. 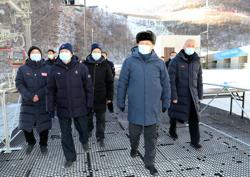