Can you tell them apart?: Su Hui (left) and Su Yin in action during the Smiling Fish Championships in Trang, Thailand. They emerged champions in the youth category. — pic courtesy of HOW KIM THO

PETALING JAYA: Shuttlers Cheng Su Hui-Cheng Su Yin may turn out to be the first identical twin sisters to reach great heights for Malaysia in the doubles at the international level – if their determination is anything to go by.

The 17-year-olds Su Hui-Su Yin are set to be the top girls’ pair in the junior ranks next year with a few older ones expected to make the promotion to the senior group.

The hope will be on these Kedah stars to fight for a medal at next year’s World Junior Championships in China.

They have shown promising results, having won several age-group junior titles over the last five years and also winning the Under-19 Bangladesh International Series in Dhaka in December last year.

Both could have made it to the Badminton Association of Malaysia (BAM) five years ago but because of their inseparable love for one another, they only joined as a pair last year.

Su Hui, the younger one, separated only by five minutes in birth, made the selection into BAM’s junior squad when she was Form 1 but her sister did not make the cut.

“Su Yin and I came for selection but unfortunately, I was the only one selected. I stayed on with BAM but I was homesick and being far from my twin sister was difficult,” said Su Hui.

“So, I left BAM after a year and rejoined my sister and continued to play for our state. Last year, though, both of us came back for the national selection again, more determined than before, and this time both of us were selected.

“We’ve many things in common and it’s amusing when people try to guess who is who ... sometimes, the umpires too.

“We are grown up now ... we are closer but we do have different things that we do nowadays,” she said.

Su Hui said their mother Tan Saik Khim, a former national player, was one of the reasons for their involvement in the sport.

“Our mother is an ex-player during the late 80s, she played in one of the Uber Cup Finals. She is our inspiration,” she said.

“She encouraged us but made it very clear to us that the journey will be hard. She advised us to persevere if we want to make it big. And that’s exactly what we intend to do.”

And for a start, Su Hui-Su Yin are looking beyond the world junior meet.

“We were preparing for the world junior meet (in January in New Zealand) but it has been called off.

“We are still eligible for the next one ... but our long-term target is to be Olympians,” added Su Hui. 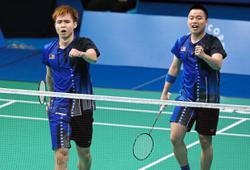