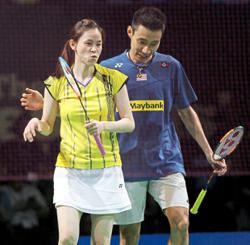 Huge responsibility: June Wei is expected to feature in either the second or third singles slot in Aarhus.

He was awed by Chong Wei’s commanding presence and how he kept the team together.

This time around the 23-year-old June Wei is going to the Thomas Cup Finals in Aarhus, Denmark from Oct 3-11 as one of the 10-member men’s squad.

The world No. 74 June Wei is happy that his fortune has changed from a sparring partner to one of the key players.

“I enjoyed my job as a sparring partner with Chong Wei in Bangkok. I also got to watch him, Lin Dan and all the others. Chong Wei and Lin Dan are great players,” said June Wei.

Chong Wei played as the first singles and won all his matches but it was not good enough as Malaysia eventually crashed out in the quarter-finals.

Lin Dan played only in the group stage and was not as prominent in the elimination round as all the ties were decided before his turn to play. China went on to win the Thomas Cup for the 10th time.

“I’ve seen them play in numerous tournaments growing up, so both of them are my idols,” said June Wei.

“We’ll surely miss their presence at this year’s edition. Some say the competition will not be the same any more but I believe the players of the new era will provide equal excitement.

He pointed out that Japan’s Kento Momota, Denmark’s Viktor Axelsen, Indonesia’s Anthony Ginting and Zii Jia have raised the bar.

On his role, June Wei said he would be ready to deliver either as the second or third singles player.

“Getting a chance to play in my first Thomas Cup Finals is a dream come true. I’ve never played in a major team event – not even in the SEA Games, so I’m excited,” said June Wei.

He was named for the Sudirman Cup in Nanning, China, last year but played no part throughout the tournament.

June Wei, however, showed that he had come of age and was ready when he emerged as the top performer at the Thomas Cup qualifiers in Manila, the Philippines in February this year.

“I did well in Manila and I hope to carry that momentum to Aarhus. I’ll try to win every match for the team,” he added.

BWF will not treat SOP offenders with kid’s glove
Automatic berth to Sudirman Cup on the cards
Norza to shuttlers: Look to Japan for perfection
Choong Hann to axe players after National Championships
Time to step up
Asian meet upgraded to premier Olympic qualifiers
‘Unique’ junior shuttlers Aaron and Chun Cher dream big
Legend Rashid reminisces on great lefties of the past
Hoo and Cheah keep fingers crossed for Bangkok
A good mix on the cards