Optimistic: Nur Izzuddin Rumsani (left) sees the return of Rosman Razak as the assistant to Flandi Limpele as a big boost to the men’s doubles department.

Aaron, who is the country’s top ranked pair with Soh Wooi Yik, is hoping that under Flandi’s guidance, they would be able to beat world’s top pairs consistently and win World Tour titles.

On Sunday, Badminton Association of Malaysia (BAM) named Flandi, 46, as the men’s doubles head coach. He took over the post from Paulus Firman, who has been moved to head the mixed doubles department.

Flandi, the 2004 Athens bronze medallist, who was India’s doubles coach before this, will be assisted by Rosman Razak and Hoon Thien How.

Aaron’s excitement to achieve the same breakthrough is understandable as he has neither scored a win against these opponents nor earned a breakthrough on World Tour yet.

“I was a little shocked at the changes made by BAM to the coaching set-up. We had absolutely no idea, ” said the 23-year-old Aaron.

“But as a player, we have to respect and accept the decision made by the national body and adapt to it.

“They must have a reason of doing so. I don’t know much about coach Flandi, but I know he’s a great player in the late 90s and early 2000s. I’ve watched him action on TV.

“So, I’m quite excited. He is expected to bring fresh approach into the team. He did well in India as Satwiksairaj-Chirag flourished under him. Hopefully, he will be able to bring us to greater heights too.”

Aaron was quick to pay tribute to Paulus, the man who had made him and Wooi Yik as one of top 10 combinations in the world. The duo are currently ranked ninth in the world and are in the running to qualify for next year’s Olympic Games in Tokyo.

“It’s a shame that Paulus will not be with us until the Olympics cycle is over. We have played under him for more than two years and our game has gone from strength to strength, ” said Aaron.

“From our quarter-finals debut at the Nanjing World Championships in 2018 to becoming the All-England finalists and SEA Games gold medallists last year... the results speak for itself.

“I wish him the best at the mixed doubles. I have no doubt that he will be doing a great job there too.”

Nur Izzuddin Rumsani, who forms the world No. 28 partnership with Goh Sze Fei, is saddened too but he sees the return of Rosman Razak as the assistant to Flandi as a big boost to the department.

“We have previously trained under coach Rosman for six months three years ago before he was promoted as the women’s doubles head coach, ” said Izzuddin,

“He is a good tactician and I’m looking forward to learning more from him.

“We’re sad to see coach Paulus go but learning new ideas from a new coach may be the change that we need to get our game to a higher level.” 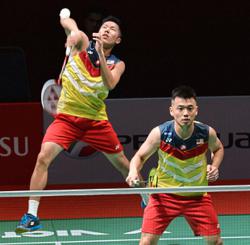 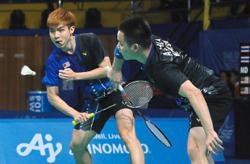 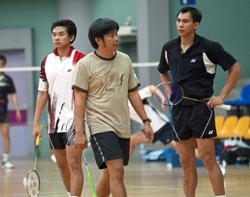 Flandi the right fit for our doubles players