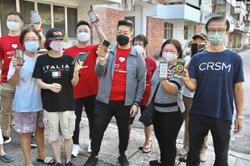 In order to provide relief, GoCare has organised the Flood Relief Home Rebuilding Campaign, and the Malaysia Furniture Council (MFC) responded by donating furniture worth RM252,300.00 to flood victims in Selangor. The Crisis Relief Squad of MCA (CRSM) will distribute the furniture, as well as essential goods and electrical appliances, to affected households to help them rebuild.

Datuk Chong said that the floods caused by the Northeast Monsoon last December had inflicted major damage to the affected areas. A large number of furniture and electrical appliances were submerged; economic activities were disrupted and an estimated RM4 billion to RM8 billion evaporated from our economy.

He added, knowing that many furniture and appliances were flood-damaged following the floods in December, CRSM jumped into action without delay to crowdsource funds and furniture through GoCare to help the victims rebuild. He thanks all the kind-hearted people and enterprises who have helped raise, so far, RM170,000 in donations and over RM1 million.

Khoo noted that the MFC had started to raise money and furniture when the floods hit our country last December, and has now collected RM1.214 million for furniture.

The MFC Chairman also said through collaboration and coordination from CRSM, the furniture was successfully delivered to Jelebu in Negeri Sembilan; Bentong and Temerloh in Pahang; Melaka; Segamat and Paloh in Johor.

Selangor CRSM chief Chng Soo Chau pointed out that he believes kind deeds are like sunshine; they bring warmth to our community; and today, through GoCare’s post-flood rebuilding plan, he hopes to crowdfund enough resources to help 1,000 families.

Proposal for fair award of allocations to all MPs Premium
Keeping data in safe hands Premium
Bleak situation for Malaysian bookstores Premium
Health Minister has obligation to uphold Malaysia's reputation as a country with one of the best healthcare systems
Pandemic or not, zoom services should continue for religious centres Premium
When foreign shutdowns cripple spare-part supplies in Malaysia Premium
Be grateful if you get a good mentor at work Premium
Conduct labs to realise the full potential of domestic tourism Premium
Introduce e-subsidy card system Premium
Role of the CFS in nation’s food security Premium