The nationwide vaccination drive is heading towards 400,000 jabs a day in the next few weeks, with the opening of more mega centres and deployment of mobile units as major boosters.

All the ministries involved are intensifying every possible way and means to fight the pandemic clusters which are still dominating. This is one of the many uplifting news carried in almost all the dailies and news portals.

Another positive piece of news is that Singapore might likely accept the MySejahtera app as a vaccination passport soon, as said by National Covid-19 Immunisation Programme coordinating minister, YB Khairy Jamaluddin. Kuala Lumpur, he said, was finalising talks with Singapore while negotiations with other countries were still underway for the recognition of the vaccine passport. Complementing those news was the Education Ministry's recruitment of some 18,702 teachers to fill shortages in several states, including Sabah and Sarawak.

Topping up the many positive stories was the RM30bil which the government still has to distribute to the rakyat and businesses in the form of cash aid and direct assistance soon as possible as said by Finance Minister, Tengku Datuk Seri Zafrul Abdul Aziz. All these inspiring news items are contributing extra features and strategies as outlined in the recently announced National Recovery Plan by Prime Minister Tan Sri Muhyiddin Yassin.

With the ramping up of the vaccination drive, the government’s goal of getting 80% of the population vaccinated before year end is nearing closer, making other cinches outlined under the Plan, including safety of our public health system and opening of more economic and social sectors, as workable and achievable, too.

The World Health Organization’s Our World In Data yesterday showed that Malaysia is way ahead of other countries in Asean in terms of total population who have received at least one vaccine dose, away from Laos, Indonesia, Thailand and Myanmar.

All these prove that the many health measures being implemented by the Perikatan Nasional-led government in handling the pandemic, have borne fruit. The removal of bureaucratic barriers to expedite the vaccination process through outreach programmes to reach all corners of the country to increase vaccination coverage, the deployment of mobile units and others, are too good to be true but all these are being intensely implemented. Vaccination is the only exit strategy to contain the pandemic in this country, and this is what exactly the Perikatan government is doing.

All these, in a way, indicate that Parliament should only reconvene as soon as it is practical and only safe to do so, including taking into account the state of vaccination in this country. The strengths and stability of the government-of-the-day have made the targets it set to tackle the Covid-19 pandemic, seem workable and feasible within the phases of transitions that have been worked out for.

Continued bashing of the present government and all these cynical political manouvres by those quarters jockeying for power should not in any way distract public’s focus and attention from giving their unwavering support to the government’s Recovery Plan.

Do not let political stunts aggravate the various lapses in compliance with the standard operating procedures and other health protocols that we have been committing, time and again. Instead of fighting Covid-19, we are fighting each other by these quarters who are out pursuing their personal political goals. The pandemic has been around for more than one year and such discordance will only make it more difficult for us to fight this battle.

The bulk of new Covid-19 clusters continues to be detected at workplaces and many others. Let there be no cluster if Parliament is reconvened. Even without a parliamentary session, it was reported recently that several Parliament staff had come down with the pandemic. And during a sitting at the end of last year held ahead of the 2021 Budget, concerns over risk of exposure to the virus had shortened its daily sitting when a staff member was infected.

Even before issues on convening of Parliament became the highlight of today’s news, Muhyiddin had said it clearly that Parliament could reconvene either in September or October if daily infections showed a decline. He gave his commitment to uphold the parliamentary democracy and constitutional monarchy, but some people just can’t seem to wait!

We must not give in to any parties who purposely create restlessness among us to the extent of hindering and disrupting the Perikatan government’s main task to handle the pandemic. As responsible citizens, we should remain true to the principles of logic and reason because being rational will help us survive and sail through this difficult, challenging period. 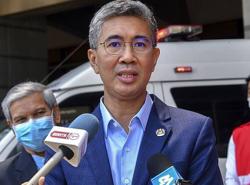