IN view of increased interest in the Penang South Islands (PSI) project and various statements calling for the project’s cancellation, the Penang State Government feels obliged to again recap how we have been able to come this far and explain the project’s significance.

We would like to address the EIA report, which was approved by DoE on 25 June 2019 after detailed and comprehensive assessment entailing technical reviews and two rounds of public displays. No other project was subjected to two rounds of EIA public display like PSI’s.

The approval came with 72 conditions, which are norms for projects of this size and nature. Of the 72, 56 are general conditions related to compliance; project design and concept; approvals and licenses; pollution prevention and mitigation measures; land reclamation and dredging activities; environmental quality control and monitoring; and others.

The other conditions touched on the Environmental Management Plan (EMP), which we have recently resubmitted for approval; environmental audit; and the roles and duties of the environmental officer to ensure EIA compliance. We have revealed this to the public in July 2019.

In the DoE’s EIA approval letter, we were also obligated to carry out offset programmes with technical advice from relevant departments, especially the Fisheries Department of Malaysia, to manage the impact on fisheries resources and fishermen.

The Offset Programme is to include artificial reefs, Fishery Aggregating Device (FAD), mangrove planting, release of fish fry, building eco-engineering structures, funding for studies and researches, and other programmes as recommended in the EIA report.

These initiatives that will not only minimise impact but also create new habitats for marine life in the project site’s vicinities and other areas in Penang, contributing towards the sustainability of the fisheries sector.

The State Government is looking into deploying artificial reefs and planting mangroves to kickstart the Offset Programme.

These initiatives are not new as we have mentioned them before in numerous media statements and press conferences. The State Government has pledged and repeatedly stated our commitment that we will comply with the EIA Approval Conditions which include the EMP.

All EIA reports will look into the potential effect to the environment, and all development projects carry some level of impact. With the right mitigation measures in place, developments and the environment can flourish together.

The State Government has been engaging with the local fishing community for more than five years through the fishermen one-stop centres called Pusat Perkhidmatan Setempat Nelayan (PPSN) in Permatang Damar Laut and Gertak Sanggul. Both centres have been operating since 2016 and 2017 respectively, and are well received among the local fishermen.

Since PSI was mooted in 2015 up till 31st May this year, 6, 153 fishermen, have been involved in stakeholder engagements. Countless meetings and discussions – both formal and informal – were done to understand the fishing communities’ challenges and how the project can positively impact them.

The key challenge plaguing fishing communities is the depletion of fish stock in line with worldwide trends which many experts including Department of Fisheries point out is the result of overfishing. 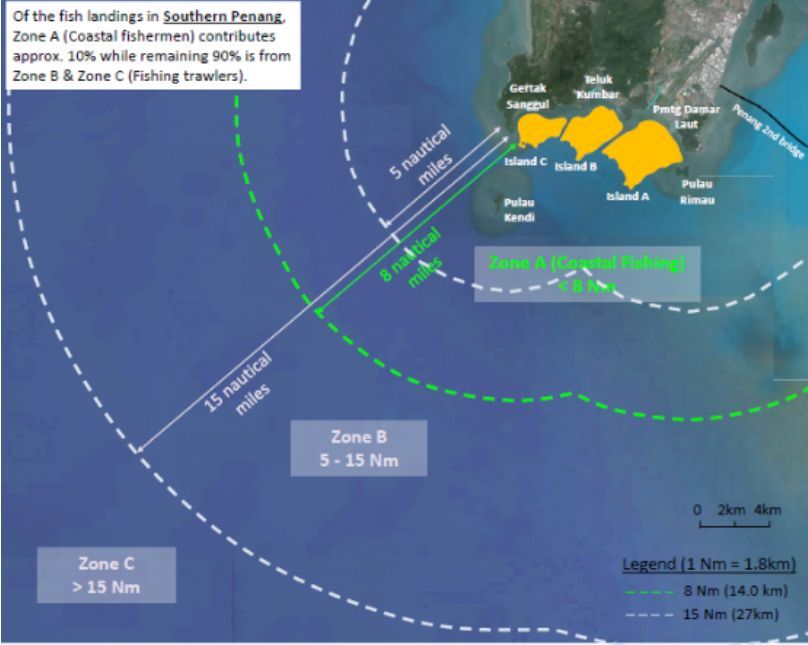 The balance 90% comes from the larger trawlers who operate in deeper waters. As such, these traditional fishermen are struggling to earn a living especially in the current pandemic.

It is important to also note that fish landing fishermen units around the PSI area only contributed about 4% of Penang’s total fish production in 2015 based on data from Fisheries Department. This was highlighted in FIA report. The report also noted a surplus of fish production in Penang at about 12, 000 tonnes. Due to this scenario, PSI’s implementation is unlikely to cause food insecurity.

To date, about 530 fishermen from the nine fishermen units have registered for the SIMP, hoping they will be eligible for the benefits.

According to the Fisheries Department’s record on nine fishermen units in south Penang Island, over 900 fishermen are closest to the earmarked site. The numbers of affected fishermen are not as inflated as what detractors have claimed, as they have included those from other parts of Penang and other states as well.

It is also important to note that many of these coastal fishermen fish outside the earmarked PSI site. Throughout our engagements with the local fishermen over the years, our officers have heard and observed many times that fishermen took their boats far beyond the PSI footprint.

This means the fishing area is certainly much larger than the 4, 500 acres we are reclaiming for PSI, and fishermen will not lose their livelihoods.

This is why some fishermen informed the state government they wanted bigger boats and engines, which the administration has since agreed to provide to enable the fishermen to continue fishing beyond the PSI site. Surely the fishermen would not ask for boats if fishing becomes impossible once the reclamation starts.

As part of our commitment to enable fishing activities to continue, a 250 metres wide unimpeded passage will be provided for the fishermen throughout the reclamation and development phases of PSI. The channel will be maintained between the current shoreline and PSI to ensure the fishermen have access to the sea at all times.

Layout below shows the access available to fishermen as the first island is developed and this will be continued as we develop the other islands as well. 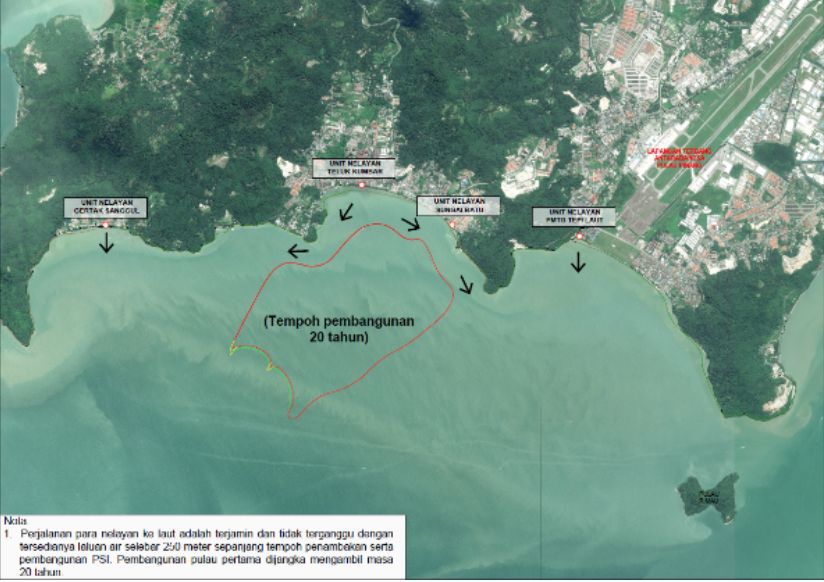 PSI at the NPPC

Before the EIA Report was approved, the project was also presented at the 31st National Physical Planning Council (NPPC) meeting jointly chaired by the then Prime Minister Tun Dr Mahathir Mohamad and his then deputy Datuk Seri Dr Wan Azizah Wan Ismail, who is now PKR advisory council chairman, in April 2019.

Apart from the State Government, Penang Forum’s spokespersons were also given the chance to present their views against PSI to the NPPC, which was unprecedented for any non-governmental organisation.

In May 2019, the NPPC communicated to the Penang state government 18 advices on implementing PSI. Among the advices were to develop it as a smart city; review the possibility of building an industrial and high technology park based on the Fourth Industrial Revolution in the region, focusing on automation, artificial intelligence, robotics and Internet of Things; study the feasibility of proposed industrial, housing and commercial developments; achieve a 70:30 ratio for public transport and private vehicle use; enhance green city initiatives to reduce carbon emissions by a targeted 40%; implement disaster risk management plans; and others.

The NPPC also reminded the Penang State Government to adhere to conditions stated in the approved impact assessment reports such as the EIA; and take into account the project’s impact on the local fishing families in the context of providing new economic and job opportunities; as well as provide a dedicated zone for affordable housing development with price controls by the authorities, among others.

The SIMP and offset programmes mentioned above are in line with NPPC’s advices on safeguarding fishermen’s welfare and the environment. We are also following the NPPC’s advice in other areas through the PSI development plan that has been prepared in consultation with the UN Intergovernmental Panel on Climate Change’s (IPCC) 2019 guidelines, Low Carbon Cities Framework, and an independent study by the world-renowned Royal Haskoning DHV, headquartered in the Netherlands.

Island A’s minimum platform level will be 3 meters above mean sea level while 20% of PSI land will be reserved for green parks, mangroves, water canals, wetlands, floodplains and bioswales to enhance biodiversity, cooling the environment by one to two degrees Celsius.

The 100% renewable energy-powered Green Tech Park will appeal to global electrical and electronic (E&E) companies and is designed to achieve 50% carbon reduction by 2030.

Education campuses will also be set up, creating an education hub for local and international students, attracting talents from all over the world to Penang. A lifestyle campus-like environment will enhance industry collaborations with education institutions, enabling development and upskilling of our workforce to move the industry up the value chain.

There will also be ample lush public open spaces spread across the island such as 7km of Central Canal, 3km of public beaches and 5km of esplanade, which can be used as venues for leisure, events and festivals that promote Penang’s local culture and eco-tourism.

By putting bicycles ahead of cars, the 140 kilometres of bicycle and walking tracks island-wide and 7 kilometres of navigational waterway will result in seamless connectivity and an additional transportation mode.

PSI is also planning to build over 5, 000 well-designed midrise affordable homes in a transit-oriented development approach, connecting the housing areas with rail line, e-trams and water taxi stations. They will be built near canal waterways, public parks, schools, community sports centres and other public amenities.

On sand for the reclamation, we wish to assure all parties that sand will only be sourced from EIA-approved sites. All sand concessionaires need to get EIA approvals before they are allowed to extract sand from the sea. The DoE will not issue any approvals for sand mining activities that will cause significant impact.

Sand extraction activities will only be confined to localised areas. The activities will not cause major impact to the sea. The sites where sand will be extracted are also not within the fishing areas of coastal fishermen.

As mentioned before, we will be sourcing sand from sites in federal waters off Perak and Selangor. The sites are some 20 nautical miles (equivalent to about 37 kilometres) from nearest shoreline, far from coastal fishing ground.

It is not one or the other

The detractors have repeated their concerns on many platforms all these years about the environmental and fishermen issues. We have been listening and, in fact, we agree with them on the importance of taking climate change into consideration and protecting the welfare of fishermen.

This is why we are implementing so many mitigation measures, carrying out a socioeconomic plan for fishermen, and introducing green initiatives for the PSI development. Suffice to say that such a massive and comprehensive plan to improve the fishing community has never been done before anywhere in the country.

We never denied that the project will have impact but we have always shared with the people how we intend to mitigate the impact, create new habitats for marine life, and provide more job and business opportunities for fishermen and other locals.

We should also consider the many socioeconomic benefits PSI will bring to Penang that have greater value than monetary returns. The job creation and economic growth stimulated by domestic and international investments will give financial stability and security to the people; while the green initiatives like low carbon developments and transportation, use of renewable energy, and provision of open spaces will contribute towards improving liveability and public wellbeing for decades to come. These benefits should be counted too.

We strongly believe we are able to achieve all the above while also being fully compliant to the stringent approval conditions imposed by DoE. As such, no precedence should be set by the government whereby approval for projects is reversed even though all approval conditions are being met.

RM20,000 raised to help single mom in custody tussle begin life anew
Holistic approach key to reforming national healthcare system
The six resolutions proposed by Wanita BN will chart the path for women’s empowerment
True picture of the cost of living
Let us foster national unity through sport
The aim is to make Malaysia completely smoke-free
Malaysia must be ready to embark on IR5.0
Windows into our hearts
There’s a climate crisis, why are we felling trees?
Don’t keep wildlife if their needs aren’t met