TODAY in Malaysia, two public service positions are always closely watched: the Inspector-General of Police (IGP) and the Chief Commissioner of the Malaysian Anti-Corruption Commission (MACC). Both positions come with huge responsibilities and high expectations, are stressful and among the toughest jobs in the public service.

Datuk Seri Acryl Sani Abdullah Sani was appointed as the new IGP on May 5, 2021. He became the 13th IGP, taking over the post from Tan Sri Abdul Hamid Bador, who served since May 2019.

The Royal Malaysia Police (PDRM) is tasked with maintaining law and order and protecting our lives and property. Police officers put their lives on the line in performing their duties to serve the public. At times it can seem like a thankless job as plaudits are few and far between and criticisms come quickly.

Since vacating his post, Abdul Hamid has cast doubt on the independence of the Police Force Commission (SPP) which is chaired by the Home Minister. He has claimed that the SPP and the Home Minister have no authority to run the police force, and it is the responsibility of the IGP to appoint senior positions within the police force. Former IGP Tun Hanif Omar also weighed in on this matter, stating that the Police Act gives the IGP the sole power to “command and control” the force.

The future of the PDRM will depend on the strategies the new IGP adopts. For a start, he has identified three focus areas to enhance the force, namely to strengthen internal integrity, strengthen its service delivery system, and support efforts to maintain the well-being of society.

It is refreshing to note that integrity will receive the new IGP’s attention. Based on the present challenges, though, he faces a tough job in enhancing integrity as a culture in the PDRM.

To gain public trust, Acryl Sani should continue the efforts of the previous IGP to stop corrupt practices and aggressively seek to get rid of rouge elements that abuse their authority and tarnish the department’s reputation. The police must confront the reality that it has amongst its organisation officers who are “poisoning the well” and they need to be weeded out.

This reality is based on the arrest of several police officers and various surveys conducted about the force. For example, Transparency International’s General Corruption Barometer 2020 results show that the police force is perceived as one of the most corrupt institutions in Malaysia.

The PDRM has many capable leaders within its ranks who are working tirelessly to clean up the force and get rid of police personnel at every level who have abused their authority or tarnished the force’s image. The government should support their efforts on improving integrity within the force while cracking down on business cartels and organised crime in the country.

It is important that the PDRM, with the support of the SPP, identifies and recognises good leaders within its ranks to achieve success with this efforts. A good leader possesses three specific criteria:

> Merit: The merit of a person can be assessed through his/her experience and professionalism in doing the job.

> Boldness: A good leader is not afraid to uphold the truth and the law even when directed to do something unlawful.

> Integrity: A good leader has a strong ethical character and is known not to have done anything illegal for his/her personal interest.

Sadly, the last two criteria seem to be lacking among many leaders today. Without integrity, everything a department does will be viewed as flawed and this does a disservice to those who serve with dedication and integrity.

Moving forward, for the police force to regain public confidence, every officer needs to work professionally and, more importantly, each must perform his or her duties without compromising on integrity. Doing this, along with keeping politics out of policing work and ensuring no political inference in police administration, will be viewed as commendable moves and strong steps in regaining public trust.

The IGP needs to carry out his leadership duties by being an example, especially in being commissioned as the highest police officer in the land; he must be “whiter than white” and commit to recognising integrity among his officers, preventing internal conflict, supervising them better and training them better.

Raising policing standards, enhancing professionalism, strengthening his Inspector-General Standing Orders, reviewing reform programmes and relooking at the business of promotions as well as building public respect for law enforcement personnel are some of the areas he needs to focus on.

Acryl Sani has 35 years of experience in the force, and has held various senior positions – all that expertise can be put to good use in terms of strengthening the police force and enhancing integrity at all levels.

In addition, the SPP should be revamped so it is similar in structure to the Public Services Commission of Malaysia to ensure that integrity is not compromised and that the SPP will not appear to function like a rubber stamp. Steer the SPP to a position of independence and do not allow political interference, including in the appointment of new directors at PDRM HQ, Bukit Aman.

The PDRM should keep fighting internal corruption and continue eliminating business cartels and organised crime. In time, the strategies and actions of the IGP and the government will give a clearer picture of what the future will look like for our men ad women in blue.

The rakyat wants to be proud of their police force and trust that it performs its duties diligently in maintaining law and order and protecting the country with the highest level of integrity. Let’s all work together to make this a reality. 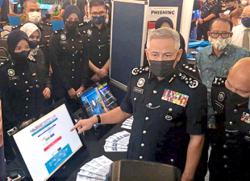