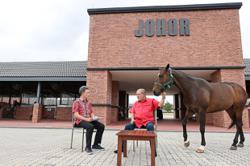 I SALUTE the Sultan of Johor for proudly and rightfully acknowledging the significant role played by the Chinese in the economic development of his state and asserting that they are Malaysians and not pendatang, “A lasting legacy” (Sunday Star, Feb 21).

In this regard, I would like to throw more light on the pioneering role of the Chinese in opening up Johor’s jungle to cultivate pepper and gambier, which were the mainstay of the state’s economy until the end of the first decade of the 20th century. The establishment of pepper and gambier plantations by the Chinese in Johor actually gained momentum from the mid-1840s. These pioneer Chinese planters had mainly shifted from Singapore due to the shortage of land for planting these commercial crops there.

Temenggung Daeng Ibrahim apparently granted the first permit (surat sungai) in 1844 to a Chinese entrepreneur to clear land along Skudai River for cultivating pepper and gambier. Between end 1844 and mid–1845, about 52 new plantations were established in Johor by the Chinese from Singapore with a workforce of about 500.

Daeng Ibrahim cleverly introduced the kangcu system of cultivation whereby a Chinese headman called kangcu (lord of the river) was given control of each river where pepper and gambier were cultivated along its banks. In the words of B.W. Andaya and L.Y. Andaya (two renowned historians), the kangcu system was “the best example of Malay co-operation with Chinese investors and labourers.”

Both Daeng Ibrahim and his son, Sultan Abu Bakar, were enterprising and visionary rulers who wanted to open up Johor’s jungle to commercial agriculture and develop its economy. As aptly stated by Lim Pui Huen, both of them “showed much vision and shrewdness of judgement in harnessing the energy and entrepreneurship of the Chinese for the benefit of Johor. They devised ways of indirectly controlling the Chinese in a manner that fitted in with Chinese social practices while precluding potential sources of conflict.”

By the early 1860s, there were about 1,200 pepper and gambier plantations in Johor with about 15,000 Chinese labourers. As stated by James C. Jackson, Johor became the largest gambier producer in the world during the 1880s.

Due to the close and harmonious relationship between the Johor rulers and Chinese community, Tan Hiok Nee was appointed “Major China of Johor” in 1870, the highest ranking Chinese official. Subsequently, in 1874, he and Seah Tee Heng were appointed members of Sultan Abu Bakar’s 24-member State Council.

We must acknowledge and be proud of the roles played by all ethnic communities in shaping our present-day society and nation. Such a step helps to foster a sense of belonging and pride as Malaysians among our young which is vital for our nation’s continued success and well-being.

Towards this end, Sultan Ibrahim Ibni Almarhum Sultan Iskandar has set an excellent example for others to emulate.