Some professors do not retire

RECENTLY, our professors were ruffled by comments made by a respected figure in the academic world, Tun Arshad Ayub. During a press interview, Arshad said that our professors, who now number about 2,500, are lacking in quality.

Naturally, some professors did not take too kindly to the comments. A retired professor now living in New Zealand wrote a letter to the editor to provide a balanced response. He said it was not quite right to describe all professors in the country as lacking in quality.

In fact, there are professors who are actively involved in advising the government on various policies for the country. Most of them are fellows of the Academy of Sciences Malaysia (ASM).

For example, ASM secretary-general Prof Awang Bulgiba Awang Mahmud is a much sought after expert for ideas on the Covid-19 pandemic. Those who have been following the media debates on the topic would easily recognise him.

The others include Prof Ibrahim Komo who has been offering advice on the development of the country’s geosites into tourist destinations; Prof Abu Bakar Jaafar, who is currently chairman of Malaysian Green Technology Corporation and has been actively involved in the nation’s foray into green energy including Ocean Thermal Energy Conversion (OTEC); and Senior Prof Khalid Yusoff, now a vice-chancellor at UCSI university, who is still actively involved in leading internationally funded research in the medical field.

We should take Arshad’s comments in a constructive manner. One message which I feel deserves attention is the need for universities to bring in more industry professionals to teach and do research. Yes, some universities do engage industry experts as adjunct or visiting professors.

During his time at the helm of ITM, Arshad capitalised a lot on industry professionals to inject more practical knowledge into students.

I know of many universities in Britain and Germany that provide tenure to industry captains to be full-time professors.

Unfortunately, here we put too much emphasis on publications, such as H-Index, instead of knowledge and experience. We need to have the right balance.

To me, as soon as one becomes a professor, one is expected to amass a lot of knowledge in one’s subject matter. This knowledge can come from years of doing academic research and teaching as well as experience in industry. It then becomes incumbent for professors to offload their knowledge for use by society.

This is what happened with the nation’s iconic professors like Royal Professor Ungku Aziz. He was offloading his knowledge all the time even after he left his position as vice-chancellor at Universiti Malaya. 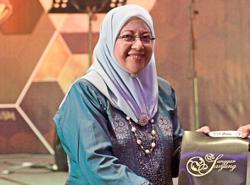