MALAYSIA has the third lowest female labour force participation rate in the Asean region. At 56%, it is just slightly higher than Indonesia and Philippines but much lower than Singapore, Thailand and Vietnam. According to responses to the Malaysian Labour Force Survey in 2018,60.2% of women who are not part of the labour force cited housework, including child and elderly care, as the main reason for not seeking work.

Hence, it is vital to address the social norms where the responsibility of caring for a family member or raising a family is left solely on the woman. Our society needs to encourage a more balanced relationship and 50/50 partnership in a household. Husbands and wives need to share housework and childcare equally, especially when both are employed full time.

Macroeconomic simulation implies that closing gaps between men’s and women’s economic opportunities could boost Malaysia’s income per capita by 26.2%, an average annual income gain of RM9,400 for every Malaysian.

As professional working women, we care about our work whether we wear makeup or not. What matters is the quality of our work while we juggle between paid and unpaid work (domestic chores). We also need to be more sensitive towards female workers who are affected by the movement control order (MCO), including daily-paid workers in low-cost flats, migrant workers and refugees living in cramped quarters who are not earning an income now.

What’s the use in advising them to wear makeup or talk to their husband in Doraemon’s voice when all they are thinking about is their survival? Besides, cosmetics can be costly for women, especially those on the lower end of the earning scale. Thus, we also need to be more sensitive towards these groups of working women.

A World Bank study in September 2019 concluded that our country’s income per capita can grow by 26.2% if all barriers to employment for Malaysian women are removed and their participation in our economy is increased.

We should focus on policies and programmes to increase women’s labour force participation, such as job placements, development programmes and career comeback programme for professionals.

In addition, given that a large number of working women in Malaysia are micro-entrepreneurs or hold other informal jobs, improving social protection and skills training for them is crucial. Let’s not build barriers to increasing the number of women in the workforce for the socioeconomic development and growth of the country (which could potentially increase Malaysia’s GDP to between RM6bil and RM9bil).

Finally, public discussion should be encouraged about the social norms and values underlying the widespread gender disparities in the workforce. It is time for us to publicly showcase modern male role models from different ethnic groups and religion who are ready to share family responsibilities, as well as modern female role models who show that it is possible to have both a family and a career. 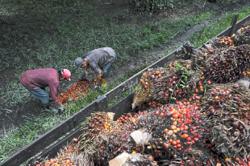