Why DAP is a liability to PH It is almost unspoken, but many Malay leaders within the Pakatan Harapan (PH) government is beginning to believe that DAP is a liability to the coalition. There are some who believed that the woes bedeviling Pakatan is largely because of DAP.

It all started well. Pakatan won the 2018 general election. DAP was part of the team. The euphoria was unimaginable. A coalition of four parties representing the cross-section of a truly Malaysian society toppled a government that has been in power since the Independence. Not many believed that could be done. Even the most optimistic political analysts believed that Barisan Nasional (BN) could still win the election with a razor-thin majority.

But Pakatan won. Tun Dr Mahathir Mohamad led the country the second time. Changes were in the air. Hope was the key word. Expectations were high. They expected Dr Mahathir and his band of ministers would change Malaysia forever, for the better of course.

After all they got rid of a corrupt government and kleptocratic ruler in the form of Datuk Seri Najib Tun Razak.

DAP was instrumental in that election. While the swing votes among the Malays was barely registered, the Chinese and Indians showed the way. Because of sheer numbers, even a 10% swing among Malay voters affected the overall result.

The opposition before the election was harping on bread and butter issues involving the rakyat – high cost of living, price of essential goods and such. And they had a punching bag in the form of GST.

But the people want to see change. They want a better life. If the previous government was corrupt, they expect a better one. If the economy was bad before May 2018, they expect something better. And more importantly most Malaysians want a freer, fairer and more equitable Malaysia. They want race relations to improve.

None of the above has happened!

How things have changed from euphoria to despair and from hope to almost hopelessness! The people were expecting changes the first few months. They were willing to sacrifice for change. They wanted the right policies to be in place that would help them. They even expected miracles.

But nothing really happened. A new Cabinet was formed that comprised of those between the age of 24 to 94. Many are novices, first-time ministers with only enthusiasm and perhaps vendetta to start with, or to prove they are better than the previous ones.

The entire narrative during the first few months was blaming the previous government. Najib-bashing was the trend, so much so it backfired spectacularly.

Najib is no ordinary politician. He has been in politics for four decades. He knew the attack on him would not gel well with the Malays – whatever their political affiliation is.

True enough he turned the relentless attack on him to his advantage. His picked up a tagline "Malu Apa Bossku!" and the rest is history.

Some find it disgusting for someone who has done so much damage to the country coming out with such a tagline.

The tagline is probably the most effective ever in the history of political branding, here and abroad. It is simply a brilliant strategy. Najib knew he has to fight back, and he knew where he is heading in the court cases he is accused of doing. But the fightback he choreographed is simply outstanding.

But Najib is not the only problem bedeviling Pakatan. On Saturday (Jan 18), Pakatan lost in the Kimanis by-election in Sabah. It has lost five by-elections so far and perhaps counting.

While the Kimanis fight is a Sabah one, but then it is certainly a serious wake-up call for Pakatan. Another morale-boasting win for Umno, Barisan, and of course Bossku Najib!

What went wrong? DAP especially should do a lot of soul-searching from now on. Do not get carried away by polls after polls proclaiming their ministers are performing above the rest. The polls are not representing the true vibes of the people. Certain newspapers are known to be colluding with certain political leaders within Pakatan. Imagine Harakah polling its readers, or Sinar Harian doing a survey on ministers' performance.

When Barisan lost, one of the first things the leaders realised was to set the motion of "blame the DAP" campaign. Blame everything on DAP. DAP is controlling the government. DAP is setting the national agenda. DAP is undermining the Malay and Muslim causes. Blame them for everything – the restructuring of Tabung Haji, sales of government assets, problems in Felda, and now even the RM30 payment to the rakyat via e-wallet, not to mention the haze and the death of an officer at a parade (yes those too!).

The appointment of a DAP minister at the Finance Ministry did not help. Notwithstanding Lim Guan Eng's performance there, to the Malays it is too sensitive a seat for a DAP leader to be there, and Guan Eng is never known to be the one who takes the bulls by the horn, so to speak. But engaging or endearing himself to the Malay groups, even in the preparing for the budget, is not his strength. As a result, despite a reasonably good budget and a truly rakyat-driven one, there was little applause for his work.

Gobind Singh Deo is trying hard to prove his worth, but sadly he is caught in his own ignorance. Believing that Pakatan government is not controlling the media is naïve. Just look at what happened to the group taking over the licenses of the Utusan group of newspapers and the taking over of Media Prima Bhd by a party close to Parti Pribumi Bersatu Malaysia. Is he oblivious to that?

Gobind should spend more time working on abolishing many laws that are stifling press freedom and freedom of speech. It was part of the Pakatan manifesto after all to abolish or repeal such laws. Even his good intention to set up a Media Council is being questioned. Why should it be initiated by the government and not the industry? Why the need for a Media Council now in the world of Internet and social media onslaught?

Perhaps DAP is almost clueless what is happening around them. The ministers are busy appeasing certain section of the media so that they will be hailed as the top performing ministers. On top of that, they are still behaving like they are in the Opposition. Some of them are making remarks deemed offensive to the Malays.

Barisan and Umno need not use the race card any more. DAP leaders are helping them do it.

Some of the DAP leaders are not even bothered to engage with Malay groups. Their PR is bad. Their officers are barricading their bosses in their own cocoons of comfort believing that by "working hard" they can help the people.

To be fair to all, engaging with people and communicating with the public is not the weakness of DAP leaders only, in fact most Pakatan leaders. Whatever you say about Umno and Barisan leaders they avail themselves 24 hours a day, 365 days a year to the media.

The Malays and Muslims have reacted to the so-called DAP-controlled government in more ways than one. One needs only to read the vitriolic attack on DAP in the social media. There have been furious discussions among the Malay groups (not necessarily among the Malay ultras) raising concerns about the issue.

The Pakatan government was caught with their pants down with the ferocity of the rejection of International Convention on the Elimination of All Forms of Racial Discrimination (Icerd). And they must take heed the cooperation between Umno and PAS, which again, most Pakatan leaders take it lightly. The notion that DAP is undermining the Malay interests is taking traction. I am not surprised that the Kongres Maruah Melayu was organised at all. In fact, I am not at all surprised to see Dr Mahathir at the rally. He was just trying to appease the Malay groups. He has little choice!

Even among the Chinese, the DAP has a lot to answer. It has in fact lost a significant support from what I heard. Being in the government, DAP leaders at best are mumbling their displeasure over certain policies. But perhaps to show unity, most of them would rather keep quite. Or simply Dr Mahathir has succeeded in reigning them in. Some even believed DAP leaders have become paper tigers in the government.

In short, they are not wining the hearts of the Malays but losing the confidence and goodwill of the non-Malays too, even the Chinese.

The saddest part is Malaysia is worse in terms of racial relation now than ever. The racial temperature is high. Our people are drifting apart. Everything is tuned into a racial issue. Not only should political leaders be blamed but certain interest groups from all races instigating racial tension are to be blamed.

DAP must take a serious look at itself in the mirror. Trying to behave it is multiracial party is a good attempt but so far it has been only a cosmetic attempt. It is still perceived as a Chinese party. And to many Malays, DAP is still a racist and chauvinistic Chinese party. The leaders are still trapped in the mindset of the old ways. DAP should change with time.

DAP must truly prove itself to be a party for all, first and foremost. And to be effective in Pakatan, it has to change its ways.

More importantly there is an urgent need to reach out to the Malays for it has failed miserably in that area. Little wonder DAP is being made the bogeymen and also an enemy to the Malay and Muslim causes.

And I am not surprised many Malay leaders in Pakatan are regretting DAP's presence in the coalition. Things would have been better without them, they believed.

> This article first appeared in sinchew.com.my 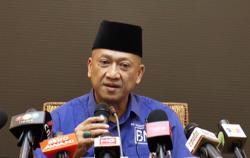