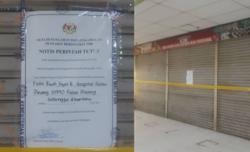 DURING a meeting with medical assistants from Hospital Langkawi recently, I brought up the subject of jellyfish sting incidents which seem to be on the increase in the past few months. They told me the number of patients seeking medical attention at the hospital for jellyfish stings at Cenang Beach has been increasing annually.

One of the doctors who has been working in the hospital for one and a half years related a recent case where one patient had to have a limb amputated due to severe infection caused by jellyfish stings.

Most of the cases of jellyfish stings occurred at Cenang Beach (590 reported cases), followed by Tengah Beach and Kok Beach. The situation concerns me personally as my family travels to Langkawi at least once a year to enjoy the beach, swim or just look at the sunset at Cenang Beach.

A three-year study reported a total of 759 patients with jellyfish stings, with the highest number occurring in July, October, November and December.

A higher incidence of jellyfish stings has also been reported at the tourist hot spots of Manukan Island, Mamutik Island and Gaya Island in Sabah and at Pangkor in Perak and beaches in Penang.

The prevalence of jellyfish in certain areas has led tour operators and hotel managements to put up signs warning of the problem on their websites.

In fact, during site visits and casual walks on the beach in Linggi, Melaka and Mersing, I often see smacks of jellyfish swimming in the water at depths of less than one metre. Fortunately, these areas are not crowded with people and the number of jellyfish can still be counted easily.

Jellyfish is present all year long in the seas surrounding Malaysia as it prefers warm water to gather and bloom.

With its 4,000km-long shoreline, a proliferation of jellyfish could be a potential nightmare for Malaysia as the warm seawater here helps jellyfish embryos and larvae to develop and grow quickly. And according to the Meteorological Department, there has been an increase in mean surface temperature from 0.6ºC to 1.2ºC over the past 40 years in this country.

There is no single factor contributing to the proliferation of jellyfish but overfishing, pollution, warmer waters, and low oxygen levels in the sea have been found to be among the reasons for this.

Jellyfish predators such as sea turtles, tuna and sharks have been overexploited due to overfishing. For instance, the population of sea turtles worldwide has dropped by between 80% and 90% since 1960. There has been a 99% decline in the number of leatherback turtles in Malaysia, for example.

Nutrient runoff, which carries phosphorus and nitrogen from fertilisers, from rivers to the sea encourages the growth of phytoplanktons, creating dead zones where plant-like animals deplete oxygen in the water. Jellyfish is also known to tolerate these low-oxygen environments.

The problem is compounded by the fact that jellyfish is also an economic commodity. In China, jellyfish is considered a delicacy and has been consumed for centuries. In Sarawak, for example, the fisheries market allows the growth of the jellyfish industry, particularly in Kuching, Betanak and Ulu Kuala Matu. Here, two common species are caught – the red jellyfish which is present all year round, and the white jellyfish which is caught usually in the early and later parts of the year (February to April and September to December). In Peninsular Malaysia, Bagan Datuk in Perak is a major exporter of preserved jellyfish to Japan and China.

Jellyfish is also prized for its medicinal value in the treatment of high blood pressure and bronchitis. Scientists have also pointed to at least one species of Mediter­ranean jellyfish – the fried egg jellyfish or Cotylorhiza tuberculata – as a potential source of raw materials for cancer treatment and antioxidants.

It is the responsibility of local authorities to provide facilities to protect the public from jellyfish stings. They must allocate a budget to set up nets to keep jellyfish away in areas frequented by people.

Prior to launching the triathlon in Penang in 2013 after a lapse of 15 years, the organisers had to spend RM40,000 to put up a net to prevent jellyfish from interfering with the competitors. The first triathlon in 1998 had been disrupted by a massive jellyfish attack on the swimmers.

Lifeguards and emergency response personnel on beaches are advised to have vinegar on hand so that they will have an immediate remedy to reduce the pain from jellyfish stings. One should rinse the sting with vinegar to deactivate any nematocyst that might still be on the area affected and go to the nearest hospital for medical treatment.

People, especially those whose livelihoods depend on the sea, must always be aware of the jellyfish threat.

Centre for Coastal and Marine Environment