Take a minute to change a life

IN the past decade, suicide has gained prominence as a global problem of epidemic proportion. Studies summarised in the World Suicide Report released by the World Health Organization (WHO) in 2014 indicate that each year over 800,000 people lose their lives to suicide. To put this in perspective, this is more than the total deaths resulting from other violent acts such as homicide, war and terrorism combined.

To emphasise the dire need to address this critical public health issue, the International Association for Suicide Prevention (IASP) and the World Health Organization (WHO) has designated Sept 10 as World Suicide Prevention Day. This annual event, which has run since 2003, is intended to generate publicity and serve as a reminder to governments and public health institutions worldwide of the tremendous social impact of suicide. This year’s theme is “Take a Minute, Change a Life”.

For every person who dies by suicide, another 25 more will make an attempt. These individuals could be our family members, friends, classmates, colleagues and neighbours. The communities that they are linked to play a critical role in supporting them during their most vulnerable time. As members of these communities, it is our responsibility to look out for the warning signs of suicidal ideation among those we interact with on a daily basis. We can show our empathy by reaching out to them and encouraging them to tell their story in their own way and at their own pace.

People who have lived through a suicide attempt have shared how much certain actions and words meant to them at a critical juncture in their lives. They describe in poignant terms their constant vacillation between their suicide impulses and their drive to continue living, and the wish that someone could sense their inner turmoil and reach out to connect. Some have even said that they made a pact with themselves that if someone did ask if they were okay, they would tell them everything and allow them to intervene. Sadly, they often reflect that no one asked.

The key takeaway from this is that being aware and intervening at the right time by offering a gentle word of support and listening in a non-judgmental way can make all the difference. Studies have repeatedly shown that social connectedness is an important protective factor against suicide. So being there, even for a moment, for someone who is isolated and struggling with suicidal thoughts can be a life-saving act.

Often, we are hesitant to reach out or intervene for a variety of reasons. We may fear saying the wrong thing or, worse, implanting the thought of suicide in someone who is vulnerable. While broaching the topic of suicide is indeed difficult, research has clearly shown that talking openly about this topic cannot trigger suicidal ideation. Instead, it signals to someone that they have a safe space for expressing their darkest thoughts which in turn leads to a reduction in their intense emotional pain and accompanying suicidal impulse.

People who have come through an episode of severe suicidal thinking often say that it was more the demonstration of compassion and empathy from others that helped turned things around for them rather than the actual words said in the conversation.

Since our inception in 1970, the primary goal of Befrienders KL has been the provision of a safe space for people to share their painful emotions or suicidal thoughts in a confidential, supportive and non-judgemental environment. We are part of the Befrienders Worldwide, an organisation that has its roots in the Samaritans UK and is now present in over 40 countries worldwide.

Our vision is a world in which fewer people feel the need to end their own lives, and our mission towards this end is to alleviate distress and help reduce the risk of suicide through emotional support and public education.

Emotional support is provided through three primary channels: a telephone helpline that is available 24 hours every day throughout the year (03-79568145), face to face through a prior appointment, and email at sam@befrienders.org.my.

We also do outreach to the community, particularly to groups at high risk of suicide, to provide on-site emotional support, talks, workshop sessions and seminars on counselling skills, suicide prevention, capacity building and mental health awareness.

Life is precious and sometimes precarious. Taking a minute to reach out to someone – a complete stranger or close family member or friend – can change the course of their life. 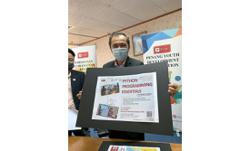