WE have of late heard about Armed Forces personnel being prosecuted in civilian courts.

This week a corporal was slapped with 79 charges of making false claims in a court in Melaka.

While I do not condone such behaviour, I am concerned as to why these cases were not dealt with internally by the Armed Forces. The armed forces are equipped with provost officers (military police) and their men cover all the four services (Joint Service, Army, Navy and Air Force).

The first question is why were these cases not detected by the Armed Forces authority, or was there a complaint lodged?

Secondly, upon detection, was there no inter-agency trust to allow the armed forces to deal with the cases themselves?

Thirdly, the armed forces – namely the Army, Navy and Air Force – each have their own court building for the purpose of holding court-martials within their premises (but still open to the public).

My concern may sound biased, especially as I am an ex-naval legal officer, but let me assure you that this formulation of an internal court specifically to deal with the Armed Forces has a very specific and serious design. The Armed Forces is an organisation that ought to have the trust of the public.

The primary business of the Armed Forces is the protection of the realm; in Malaysia specifically, after Hari Merdeka (Independence Day), it means the preservation of the Federal Constitution.

The roles these officers and men shoulder are no mindless tasks and they work as one concerted body. The public needs to know that the Armed Forces is highly motivated and disciplined. They must command the utmost respect of the public; not only the Generals but even the privates below.

For these reasons, Parliament, following in the footsteps of its predecessors, decided to adopt and use a separate set of laws and a court system that allows the Armed Forces to deal with their own away from general public scrutiny, so as to maintain the exclusivity and integrity of the armed forces and so that they are not brought into the limelight, or scandalised with gossip and speculation.

The Armed Forces laws are quite unforgiving and more severe compared to civil criminal punishment. As an example, an offence of drug abuse is punished with 12 months imprisonment and dismissal.

The Armed Forces laws are also allowed to prosecute servicemen and officers who break any Federal penal civil laws, including offences under the Anti-Corruption Act.

The court-martial is vested with the power to impose maximum punishment of death.

If it is a question of capability of the prosecution, the rules allow for officers from the legal office of the Defence Ministry (usually officers seconded officers from the Attorney-General’s Chambers) to prosecute in a court-martial.

The Armed Forces are unlike the police, who do not have a similar court to deal with their own because the nature and integrity of their establishment relate to the public directly.

The prosecution of Armed Forces personnel and officers in public courts is distasteful and undermines the reputation of the Armed Forces.

It would better serve the Armed Forces if these cases were tried in a court-martial and given the necessary press coverage to ensure transparency (court-martials are conducted in public).

The Armed Forces is ready, capable and willing and thus ought to be given the opportunity to do what is necessary to purge itself of these perpetrators and preserve its integrity within the confines of the Armed Forces Law. 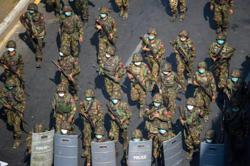 Form a multinational Islamic defense force as a response to the politics of Israel’s apartheid Zionists
Appeal for a single collecting agency for music copyright royalties
Let clinical students have first go at AstraZeneca jabs
HSR plans still on track
Quit complaining and do your bit
MMA calls for immediate audit on Covid-19 test kits of questionable quality in the market
Solidarity with and in support of Palestine: Ongoing Israeli onslaught against Gaza
Do you have high blood pressure?
Spread kindness, Corporate Malaysia
Improving vaccination experience