The Palace of Justice in Putrajaya. In Malaysia, prosecution is carried out by the Attorney General’s Chambers.

ONE of the fundamental and important features of our criminal justice system is the prosecution. A prosecution agency which is made up of officers, among others, of high integrity, diligence, professionalism and good sense of fair play and justice is an essential part of the rule of law in Malaysia.

Briefly, prosecution refers to the public agency that applies the criminal law on behalf of the state. It carries out this function by proffering charges against individuals who, in their professional view have breached the criminal law.

In Malaysia, prosecution is carried out by the Attorney General’s Chambers (AGC). According to Article 145 (3) of the Federal Constitution, the Attorney General (AG) has the discretionary power to institute, conduct or discontinue any proceedings for an offence on any of the criminal courts.

Section 376 of the Criminal Procedure Code provides that the AG shall be the Public Prosecutor and shall have the control and direction of all criminal prosecutions and proceedings under the Code. However, in the absence or inability to act of the AG, then the Solicitor General will be the prosecutor.

Due to the voluminous number of cases in the country, it will not be possible for the AG alone to be appearing in court for all the cases. Hence, he appoints a large number of officers called deputy public prosecutors (DPPs) to act as prosecutors who are under his general control and direction. Therefore, in the criminal courts, we usually see these prosecuting officers or DPPs conducting criminal trials.

The DPPs in fact are, therefore, representing the public prosecutor, namely the AG in court.

The prosecution division in the AGC carries with it a huge public burden and responsibility in the functioning of the criminal justice system and in safeguarding the rule of law in the country.

In my view, this is the first fact that all DPPs must always bear in mind. In the prosecutorial process itself, the rule of law must always be upheld.

Secondly is the decision whether to prosecute or not. This is a crucial step in the criminal justice process.

Many factors will weigh upon this decision including whether it is in the public interest to do so.

However, “public interest” does not mean everything that the general public is interested in as the masses are equally prone to sensational news. Hence, the public prosecutor will have to consider all factors carefully, including the merits of prosecuting, circumstances of the case, and so on without fear or favor after objectively evaluating the facts of the case.

If prosecution is simply based on public outcry all the time, then it would affect the objectivity of the AGC. Sometimes, public interest and justice is served by means other than prosecution in court.

For instance, I cannot see how public interest can be served by prosecuting a first-time young offender for a minor theft and sending him to jail. The choice of under what law to charge will also reflect on the sense of justice of the AGC.

Thirdly, since prosecuting officers are public servants being an integral part of the justice system, it is important to always bear in mind that the duty of prosecution is not to simply “win every case by a conviction” but to ensure that justice according to the law is achieved.

If conviction was the official default mindset, then written representations to the AGC would be futile.

Fourthly, being public servants, they should avert wasting tax payers’ money, for example, by unnecessary “dramatisation” of the criminal justice process where an effective and objective alternative is available.

One example is the pre-trial bail arguments. Much judicial time can be saved if the DPPs and defence counsels agree on a reasonable bail amount among themselves and submit it to the court rather than mindless opposition to bail by the DPPs or an equally ridiculous low request for bail by the defence.

Another example is the saving of judicial time through greater transparency on documents or evidence by the DPPs and willingness to meet up with the defence, wherever possible, to expediate the trial process by various means allowed under the law. The point is DPPs should explore various ways by which criminal justice can be served effectively.

Fifthly, arising from the point that the DPP should not personalise the prosecution to the point that he loses objectivity, he should always remember that conviction in court is based purely on evidence.

One of the safeguards of our criminal justice system is to not convict on possibilities but on the basis of beyond reasonable doubt of the guilt of the accused person. Hence, if during the trial it unfolds that the prosecution case has clearly become untenable or that the prosecution does not have any more evidence to tender, then the prosecution should not hesitate to inform the court that it no longer wishes to prosecute.

This in fact is allowed under the law and I have professionally experienced situations where the prosecuting officer, in the middle of the trial, had informed that court that they no longer wish to prosecute and request that the accused be discharged not amounting to an acquittal.

Sixthly, the prosecution should never ever forget that they are first and foremost officers of the court (same applies to the defence lawyers).

The late Justice VT Singham while passing judgement as a High Court Judge then succinctly asked this apt question: “If this court may ask, is it not the duty of the prosecuting officer to assist the court so as to ensure that the right person is found guilty and brought to justice based on all the relevant and admissible evidence and the innocent be acquitted and that an accused person be given the benefit of doubt where there are material gaps and break in the chain of evidence and this no doubt is subject of course to its own set of facts and circumstances in each case”.

Seven, I would suggest that while the prosecutors are evaluating the investigation papers given to them by the investigating officers, they should be sensitive to note whether the evidence has been legally collected and if human rights have been respected.

In this regard, the DPPs play a very significant role in protecting human rights and upholding human dignity under those challenging situations. We must also not lose our sense of compassion on both sides, where relevant.

Finally, I believe that public prosecutors, together with their families, should be given physical protection by the authorities when their personal safety is threatened in the proper discharge of their duties. 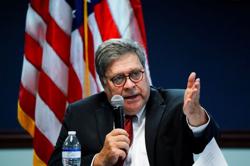 Over the Top: Our baggage of history
Selling coffee to tea lovers
It’s the right time to change
The bittersweet truth of sex after prostate cancer
Why American presidents matter
A Shakespearean tragedy coming to Parliament?
Shooting from the hip
Turbulence brewing in coming DAP election Premium
Partnerships for prosperity
Constitutional issues to the fore