Traffic foul: Many motorists and motorcyclists are guilty of beating the red light, such as this lorry driver.

PEOPLE have little respect for traffic lights these days, especially in the Klang Valley. Many motorcyclists and motorists too are guilty of beating the red light. Pedestrian crossings can be a death trap. And things are getting worse.

The movement control order (MCO) is now in its eighth month. Perhaps there are fewer cases of road accidents and fatalities as a result of fewer vehicles on the road. Traffic movement on major highways is reduced substantially.

There are 13 million registered vehicles in Malaysia today or one for every 2.3 inhabitants. China has 360 million vehicles, according to June 2020 statistics, of which 270 million are cars.

There are 1.4 billion registered vehicles in the world today. Road traffic injuries are believed to be the eighth leading cause of death globally. Each year, 1.3 million humans are killed on the road, or 108,000 people a month or 3,700 a day. More than half of the numbers are pedestrians, motorcyclists and cyclists. Road accidents are the leading cause of death for those aged between five and 29 years.

Not surprisingly, developing and poor countries account for 60% of the global registered vehicles but contributing more than 90% of the total road accidents.

The number of road fatalities in advanced countries has in fact reduced substantially.

Deaths on the road have their economic impact. A staggering US$520bil (RM2 trillion) is estimated as the cost of road injuries the world over. World Health Organisation (WHO) estimates that road accidents cost countries between one and two per cent of their GDP.

Legend has it the first casualty of a motorised vehicle happened on August 17,1896. Bridget Driscoll

was watching a dancing display at Crystal Palace in London when a car traveling at the speed of 4 miles per hour (6.4kph) hit her. Her injuries proved fatal. Since then 28 million humans have died in road accidents. The numbers have breached the one million mark a year. It is believed it will be more than two million by 2035.

Malaysians’ penchant for ignoring traffic rules must be addressed. Perhaps a campaign to monitor those ignoring traffic lights can be introduced. There are motorcyclists who brazenly use roads they are not supposed to. The lanes for motorcycles along the Federal Highway are not well kept, thus the reluctance of many to use it. Beating the traffic lights has become a national sport. More importantly, traffic police must be more vigilant.

There have been safety campaigns these many years. The Road Safety Council has been around for as long as one can remember.Perhaps we need a better strategy to ensure our roads are safer. We need new thinking, perhaps even a total overhaul of the way we do things. We have to accept the fact that while it is true drivers cause accidents, we must not forget the roadworthiness of the vehicles they use.

Our rural population depends on motorcycles as their mode of transport. Educating them on road safety is important. We have reckless road users on our highways. Road users have attitudes and bad attitude can cost problems or even deaths.

We all understand under the threat of Covid-19 that a lot of things are not working. But ensuring safety on our roads is as equally important as fighting the pandemic. In the last eight months even in the worst case scenario, slightly more than 200 of our people have died due to the virus, and had it not been for the MCO, some 4,600 Malaysians would have died on the roads during this period.

Stay safe by staying home during the MCO. But let’s work equally hard to ensure our roads are a lot safer too.

Johan Jaaffar was a journalist, editor and for some years chairman of a media company, and is passionate about all things literature and the arts. And a diehard rugby fan. 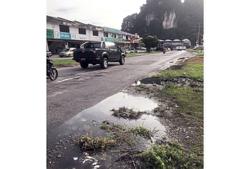