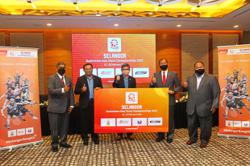 FORMER badminton great Rexy Mainaky (pic) is back in Malaysia – and he has brought back a gush of memories. He is a nice guy – I remember that as a farewell for him the last time around, some of us sports journalists played badminton for fun together with him. We could never take his tricky service shots – they were very good and deceptive. We know he was toying with every one of us with his antics.

It’s good to have a jovial person like Rexy and one who is crazy about badminton back in the fold after almost a decade.

However, he is also a guy who knows his stuff – there is no denying that Rexy lifted the standard of Malaysian badminton during his stint from 2005-2012, especially with the way he introduced Koo Kien Keat-Tan Boon Heong to the world as a young, hungry, and lethal young pair who ruled the scene for some time.

There’s also another side to him – he tends to lose his cool if things don’t go his way – but that’s quite understandable.

He quit twice in 2006 and 2008 but was persuaded by the Badminton Association of Malaysia (BAM) officials to stay back.

Eventually, he was demoted to coaching the women’s doubles in his last two years in Malaysia as Kien Keat-Boon Heong had made a request for another coach – and he eventually left just two months before the 2012 London Olympic Games.

But that was not before he had done his part to raise the standard of Wong Pei Tty-Chin Eei Hui and Woon Khe Wei-Vivian Hoo.

Hopefully, the situation will be better this time around for Rexy but one must be warned – too many cooks in the BAM kitchen can spoil the broth.

But then, Rexy, who holds Malaysia’s Permanent Resident (PR), would not have returned if he had felt that the environment wasn’t conducive enough.

Fortunately, he will be reporting to coaching director Wong Choong Hann, who is also professional in his way of executing the training and coaching programmes.

Rexy is not the only supremo I’ve had the privilege of meeting and writing about over the last 24 years. There have been many others – each with his own style, way, and personalities. They all came with ideas to churn out winners; produce Olympics and world champions; and bring back the Thomas Cup trophy etc.

Many left rather disillusioned and without accomplishing their missions.

There were the likes of Li Mao of China, Morten Frost of Denmark, Indra Gunawan of Indonesia, and Park Joo-bong of South Korea.

Of course, there were others like Tan Yee Khan, before Punch Gunalan and a host of Chinese head coaches like Fang Kaixiang, Han Jian, and Yang Yang, who were behind the success of Malaysia’s 1992 Thomas Cup victory.

When Li Mao came in early 2000, with his stern face and fierce look, I believed the training would be conducted in a military-style. It was but the man had a heart of gold.

He smokes like a chimney behind the scene but on the court, his techniques and style of coaching are new, hot and innovative.

His assistant Wong Tat Meng gave this famous quote then: “Li Mao is committed and honest. There is a Chinese saying that if you know 10 things, share only nine, but with Li Mao, he gives more than 10.”

In fact, Lee Chong Wei will always say that he learnt a variety of techniques from Li Mao, which saw him leapfrog into being a world-beater.

Frost came with big plans not once but twice but he left in a huff without saying much on both occasions. As professional as he was, he kept everything like a business dealing.

He tried his best to adapt to the culture and had a good relationship with the players.

One thing that I like about Frost is that he is a good planner and the Dane dares to take chances by pushing selected juniors to the fore.

Indra and Joo-bong were the head coaches of the singles and doubles departments during the same time (2001-2003), and their partnership almost brought Malaysia the Thomas Cup in the 2002 edition in Guangzhou, China.

Their strategy and confidence in young players saw Malaysia upset China in the semi-finals before going down to Indonesia in the final. I was in Guangzhou and saw their devotion, hard work and the way they inspired the players behind the scene.

Without a doubt, the late Indra was a players’ coach.

He was seen as a father figure by many of them. He fought for his players, even for the ones seen as without a future by the national body. Unfortunately, he passed away due to colon cancer in 2009.

I probably have a soft spot for Joo-bong. He was genuine and sincere in wanting the best for Malaysian badminton. No politics, no molly-coddling, no favouritism but strictly professional in the way he handled everything – and such a humble gentleman.

I felt he was one of the coaches whom Malaysia let go of too soon. Our lack of patience brought blessings for Japan – Joo-bong turned the nation into a powerhouse in 15 years!

There were other local heads like Misbun Sidek, Rashid Sidek, Razif Sidek, Tan Kim Her, Yap Kim Hock, Jeremy Gan, Tat Meng and Rosman Razak with credentials and passion for the game – but none of them had enough time to build the team or themselves amid many challenges.

Now, Choong Hann is leading a young team of players – a team that do not rely on one man called Lee Chong Wei – to win title after title.

Choong Hann has made some changes since he came in 2018, which include more sports science input in his programme. There is progress although there are no regular results that we have been yearning for in major tournaments (yes, the Covid-19 pandemic did not help).

Our juniors are still lacking behind the juniors from other countries. Our current top players are still battling with inconsistencies.

Joo-bong took many years to create a winning culture in Japan. Legend and strategist Christian Hadinata is still the man who calls the shots in Indonesia badminton after decades while Li Yongbo was the man behind the success for China for many years before Zhang Jun and Xia Xuanze took over.

The top is heavy with the former national No. 1 Choong Hann having many renowned coaches under his wings to chart a revival in Malaysian badminton.

The country must not just be laden with calibre coaches but it must be supported with players with equal status or even better.

Let’s give Choong Hann and his team the time to rebuild a successful team.

At least, with Rexy and four other Indonesian head coaches in the fold – Hendrawan, Indra Wijaya, Flandi Limpele and Paulus Firman, we know that they are heading in the right path.

Johor polls: PKR's going solo on logo - a branding gamble
An exhilarating celebration
Living with the virus or endemic graft
The frenzy around Dr M’s health Premium
Johor elections: A wasteful risk to public health?
The importance of the BRI Forum for international cooperation
Let the voices of youths be heard
Reunion hopes dashed
Sharing the good fortune of fertility
Bringing it on in Johor