Malaysian education: Are we up the stream?

Making a stand: Dozens of students and professors stood, turned their backs and held up signs to protest the war in Iraq when former US Secretary of State Condoleezza Rice delivered the commencement address at Boston College in 2006. - Reuters

I THINK it is time we talk about Malaysian education again, considering what has been in the news of late.

The Education Ministry’s Malaysia’s Graduate Tracer Study (SKPG) for 2018 recently revealed that 30,765 persons or 59.9% of the 51,365 graduates have been unemployed for more than one year.

That can only mean a few things:

1. Our economic growth is insufficient to absorb the number of graduates being produced by our local universities, or

2. There is a gross mismatch supply and demand mismatch between the types of graduates being produced and the requirements of the economy, or

3. The graduates being produced are not of the calibre or quality good enough for employment, or

4. All or a combination of the above.

No details were provided by the Education Minister to help us decipher the real issues behind this failure; 40% employment success is by any measure an F.

In 2018, the Malaysian economy grew 4.7% year-on-year, with a GDP value of about RM1.23 trillion. However, Bank Negara governor Datuk Nor Shamsiah provided some interesting indicative facts about our economy, based on data from the 4th Quarter of 2018:

– Manufacturing, mining and quarrying, as well as the construction sectors expanded by 4.7%, 0.5% and 2.6%, respectively.

– Public-sector consumption in the fourth quarter rose 4%. However, public-sector investment continued to decline for the fourth consecutive quarter by 4.9%.

What do all these numbers tell us?

It tells us that those graduates, if they are in the right sectors, would have more than likely found employment. The only areas where they would find difficulty would be in agriculture, mining or where the government is employing.

So, if you are a graduate in any of the STEM sectors, the probability of employment is high. But if you are in administrative or in any other fields that the private sector has no interest in, you better say goodbye to early employment or at all. 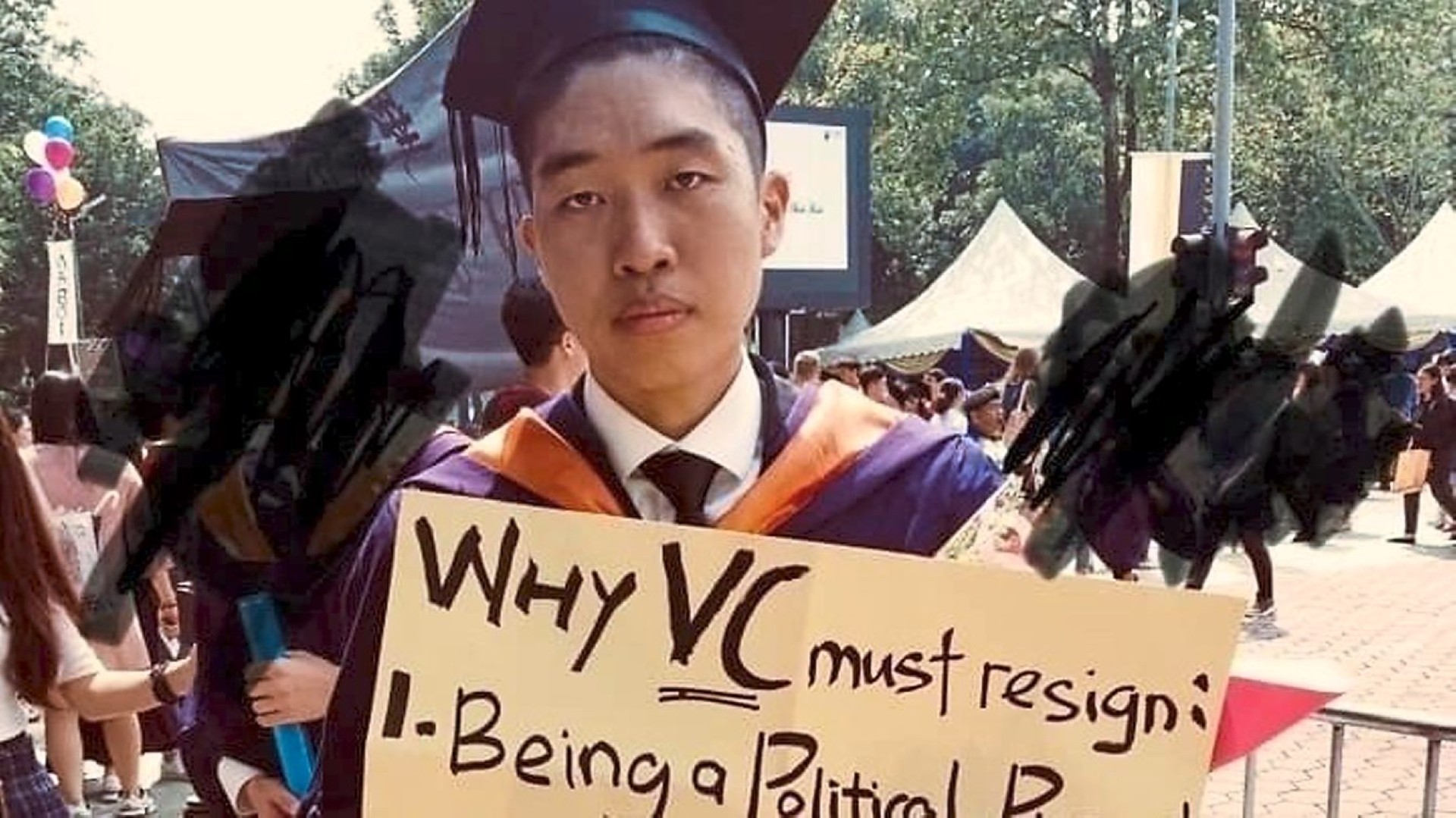 Wong calling for the VC’s resignation at his graduation ceremony.

It does make me wonder though how many of these are graduates in any areas of Islamic or related studies? How many are in Malay Studies and the likes or public administration? Where are these graduates employed, if at all, considering that none of the sectors mentioned by the Bank Negara Governor are economic growth areas?

However, I guess fret not. The Government just recently announced almost RM1.3bil to JAKIM (the federal religious department) in 2020. This does not include anything else that is allocated for other aspects of religious activities within the Federal budget.

But think about it, the Malaysian government budget deficit is 3.7% of the country’s 2018 GDP, which is RM45.5bil. How much of the Federal deficit can we reduce by abolishing unproductive institutions? And possibly then, going back to education, get students to really go into sector of the education that would provide growth and productivity to our economy?

Education Minister Dr Maszlee Malik recently stated that he wanted to do away with streaming in secondary schools for science or arts and gave all sorts of reasons for it, none of which in my opinion has any scientific basis except his own sentimental and emotional attachment to the idea.

I quote the minister: “Many of those in science streams could have become artists or linguists, while there were students in the arts stream who were meant to be scientists”.

Really? Can he quote me the study and the statistics that forms the basis of this opinion?

Quote again: “How many of those who did science should have become chartered accountants? How many who took law might have been inventors? But because they were not that good in Additional Mathematics, they couldn’t.”

What nonsense is this minister talking about. Inventors of what, plumbing tools?

I think the Education Minister has zero understanding of real work-life having spent a lifetime in academia. You need to be good in mathematics to create scientifically advanced inventions. I have friends who did engineering and advanced mathematics who ended up in accountancy and art or filmmaking because that’s where their career paths or love lead them in later life. And I know plenty of engineers and lawyers who ended up as corporate business people. Degrees are to prepare you for productive lives and careers but where you finally end up being is all dependent upon your passion upon entering the work life and how your career develops.

But streaming provides an assistance so that the weaker ones in science and maths does not have to compete with those who are stronger. Those who excel in science and maths meanwhile will not be slowed down by those without the best aptitude for it. Those whose inclinations are for a less rigorous science and maths curriculum can also find their passion and excel elsewhere. To eliminate the streaming of students would just mean we will end up dumbing down our curriculum for STEM in order to accommodate those who are unable to compete in them at the levels they ought to be. As it is already, the Malaysian primary and secondary curriculum has been immensely dumbed down to the point that I have been told even science labs are no longer available in most secondary schools for experiments to be carried out.

And then Maszlee said that in the future, big data technology and artificial intelligence (AI) would help students choose the right subjects and career path. Quote: “Who’s going to guide the children? Believe me, machines don’t lie. We’ll use AI. We’ll use big data.”

I don’t think the minister understands what big data means with respect to this concept. And by the way, machines are machines. If you put in garbage it will always spews out garbage as well, lie or don’t lie. The fanciful thinking of this Education Ministry today is not specific to the current Government. This is merely a continuation of previous governments run by successively less critical thinkers than the ones we use to have such as Tun Hussein Onn, Tun Tan Siew Sin, Tun Musa Hitam, Tan Sri Rafidah Aziz and the likes.

So while the minister goes up in the cloud on a journey of fancies, at home we have the spectre of one student protestor being intimidated and threatened with the withholding of his degree for making a principled stand during the Universiti Malaya convocation against the university’s sponsorship of the so-called Malay Dignity Congress and the racist speech that was made by the UM’s own Vice Chancellor. And the minister says nothing. I remember this minister being one who said he will be the champion of freedom on campus and student activism.

I am willing to bet that if the said student had gone up the podium with a placard supporting the congress and the VC, everything will be honky dory and he will be praised as a model minority. (Wong received his degree yesterday)

I am in full support for the rights of this student to voice his protest during his time at the convocation ceremony. A protest has no censure of time and place. It must be done at the most appropriate time that gains the most attention.

Was he violent? No. His was the epitome of a principled stand and protest against an institution of higher learning supporting what can only be termed as a racist rally. He took a leaf from Gandhi and Martin Luther King Jr – a civil disobedience and a protest to the inequities upon him and his fellow man.

Was this young man “kurang ajar” (ill-bred)? No.

A university sponsoring an event spewing racist hatred and supremacist ideology is the one that is kurang ajar. An academic leader speaking in racist terms is the one who should be ashamed for bringing disrepute to the university.

This is a principled stand by a young man proud of his country. If this had happened at either Cambridge or Oxford in the UK, the whole student body and possibly even their professors would have stood up with placards during the convocation and demanded the VC resign on the spot. But I guess that is the difference between a first world mindset and a third world one.

I will end this week by quoting this principled and brave young man, “Even if the university had organised a Chinese or Indian Dignity Congress, I would’ve fought against that as well”.

The views expressed here are solely the writer’s own and do not necessarily reflect those of The Star.