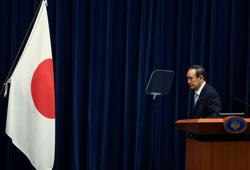 A lot of political juggling is required when a coalition forms a Cabinet. But what matters now is meeting the people’s expectations.

WHATEVER reservations we may harbour about the new government, let us give the Prime Minister and his Cabinet a fair chance to redeem his pledge to the nation.

Let us put an end to the political turmoil of the last few weeks and pray that the new PM can provide bold and innovative leadership to tackle the many pressing problems confronting the nation.

It is hoped that the Cabinet chosen by Tan Sri Muhyiddin Yassin will remain cognisant of the horrendous mistakes of the 1MDB era and take lessons from there. Malaysia’s nascent democracy is growing stronger and more and more educated people, especially the young, are aware of the corruption, greed and lack of accountability at all levels of society.

The electorate desires and deserves a government that is responsive to the felt necessities of the times and is responsible and accountable to the people.

Barring some extreme sections of society, there is moral recognition of the need to be fair to all races, religions and regions. The political executive and the civil service must wake up and take note of the growing tide.

The new government should continue the institutional reforms of the last 21 months and seek bipartisan support to implement the changes. Reliance on parliamentary committees and NGOs to seek new ideas and new methods will help the government to keep its fingers on the pulse beats of the nation and its ears close to the ground.

The Opposition too has a role to play in healing the nation. It is believed that as soon as Parliament reconvenes, the Pakatan Harapan coalition will introduce a vote of no confidence to test the democratic legitimacy of the Muhyiddin government. The right to introduce such a motion is indeed implicit in Article 43(4) of the Federal Constitution.

I hope, however, that this right will not be exercised. In view of the dire economic straits the nation is plunged in, let us hope that Pakatan can play the role of a responsible and constructive Opposition in Parliament and keep the new government on its toes.

A vote of no confidence, if it passes, may result in a snap general election for which the Election Commission is not yet ready due to the massive number of newly enfranchised voters. Elections cost hundreds of millions of ringgit which, at this time, the nation can hardly afford.

Elections may not produce a clear-cut winner and if there is a hung Parliament, the political turmoil will continue, hindering economic recovery as investors look for political stability.

It is also rumoured that some lawyers may invoke the courts’ power of judicial review to challenge the inordinate delay in convening Parliament, which last met on Dec 5 last year and is to meet next on May 18.

This too is a legal right that I hope will not be exercised by the Opposition as it will drag the courts into the vortex of partisan party politics from which the institution will not emerge as a winner.

Under Article 55(1) of the Constitution, six months can elapse between the last sitting in one session and the first meeting in the next session. The power of summoning Parliament belongs to the Yang di-Pertuan Agong, who acts on the advice of the Prime Minister under Article 40(1).

A similar situation occurred in Britain in August 2019. Prime Minister Boris Johnson advised the Queen to prorogue Parliament despite the impending exit of Britain from the European Union. The matter was challenged in the court in R (Miller) v The Prime Minister and Cherry v Advocate General for Scotland. The High Court ruled that the issue of prorogation was purely political and not fit for judicial determination.

On appeal, however, the Supreme Court ruled that the prorogation was reviewable and unlawful “because it had the effect of frustrating or preventing the ability of parliament to carry out its constitutional functions without reasonable justification.”

Some constitutional issues have also been raised about the appointment of the Cabinet. There was a delay of about 10 days in swearing in the new ministers. However, there was no violation of the law as no time limits are prescribed.

No deputy prime minister was appointed. This too is perfectly legal as the post of DPM is not mentioned in the Constitution and is purely conventional.

In relation to Muhyiddin’s Cabinet appointments, much of the criticism is centred around the choice of MPs to helm the important portfolios. Without doubt, some of the criticism is justified. But one must note the systemic constraints a PM works under in a parliamentary system.

Unlike the system in the United States, where the President is permitted to draw upon any talent outside the Congress, the Malaysian Prime Minister is constrained by Article 43(2)(b) to choose his colleagues from among members of either House of Parliament. It is inevitable that many old war horses will be bridled.

Political realities demand that all coalition partners, all states of the federation, all races, religions and regions, and both genders get some representation. The PM is expected to award portfolios to senior members of his party or coalition irrespective of their individual qualities. The leading politicians may even stipulate the posts they are prepared to accept.

All in all, the PM appoints some individuals primarily for their competence, some for their ability to represent important factions and some for their personal loyalty. Cabinet formation in a coalition government is an acrobatic feat of political juggling.

Let us hope that the appointees rise to the expectations of the nation.