When things get bumpier in the night 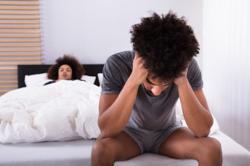 I started having sex during my university days but I am not promiscuous.

Admitted I have had previous sexual relationships, the last of which ended six months ago.

I have since entered into a new relationship and everything was going well.

This was until my boyfriend told me he experienced pain during urination and penile discharge several days after we had intercourse.

He went to the doctor, who suspected he had contracted chlamydia and tested him for other sexually transmitted infections (STI).

Luckily, most of his symptoms were resolved with a course of antibiotics.

My boyfriend accused me of causing his infection and asked me to get tested.

At first, I was furious as I thought he was cheating on me but eventually trusted his assurance that he had not been unfaithful.

This points the finger at me as the source of infection and I am getting tested.

However, I am racked with guilt and self-doubt.

Can Dr G tell me about STI and what exactly is Chlamydia and gonorrhoea?

What are the typical symptoms of such infections? Is it possible for me to have chlamydia and be completely unaware of the infection?

What are the consequences of not getting treatment and is it curable?

Am I the victim or the guilty party with this infection?

Other similar infections are parasites such as trichomoniasis

The common bacterial STI are gonorrhoea and chlamydia.

STI do not always manifest symptoms, which results in the risk of passing it to others. However, the fulminant symptoms of STI may include vaginal or penile discharge, ulceration of the genitalia and pain on urination.

Chlamydia is a word derived from the Greek word for cloak. As this suggests, the infection is often "concealed" or "disguised". Chlamydia has an incubation period of between two to six weeks.

Although most women are oblivious to the infection, symptoms sometimes occur and in severe cases, cause pelvic inflammatory disease and possible infertility.

Men, on the other hand, are more likely to experience symptoms of chlamydia infection. These include penile discharge, painful urination and even swelling of the testicles.

Chlamydia is one of the most common STI, affecting about 4.2% of the female population and 2.7% of men worldwide. The United States reported 1.4 million new cases in 2014, with infections highest amont among sexually active individuals aged 15 to 25. Globally, chlamydia is known to have about 61 million new cases yearly and tends to be more common among women.

Gonorrhoea, colloquially known as the clap, is a similar STI caused by bacteria, with descriptions dating back to the Old Testament.

The term gonorrhoea was first coined by the Greek physician Galen before 200AD, who referred to the infection as an "unwanted discharge of semen". Although some are asymptomatic, infected men tend to have the severe symptom of copious pus discharge from the penis, followed by a burning sensation when urinating. Women experience vaginal discharge, bleeding between periods and pelvic pain.

Gonorrhoea affects about 0.8% of women and 0.6% of men with an estimated 100 million new cases every year. Untreated gonorrhoea can spread to joints and heart valves, accounting for at least 700 related deaths every year.

Traditionally, gonorrhoea and chlamydia are diagnosed with gram staining technique. However, modern polymerase chain reaction (PCR) testing methods are increasingly used. The tests for screening and active infection are crucial to reduce the spread of the infection. Individuals are often tested for other STI as the coinfection with chlamydia, syphilis and HIV can be as high as 54%.

Infected individuals can be successfully treated with antibiotics such as ceftriaxone by injection, and oral treatment such as doxycycline and azithromycin. As resistance to these antibiotics is emerging, correct dosage and strict compliance are necessary to ensure complete eradication.

As with most STI, the risk of infections can be significantly reduced with the correct use of condoms and limiting sexual activities to a mutually monogamous relationship with an uninfected partner. Those previously infected (unknowingly or otherwise) and treated are encouraged to return for follow-ups to ensure complete treatment and elimination.

Although chlamydia and gonorrhoea have a near 100% rate of eradication with appropriate antibiotics, the feeling of unease and guilt often persists in a relationship long after treatment.

The English novelist and dramatist, Henry Fielding once said: "Guilt has a very quick ears to an accusation." When it comes to the complex issues of STI from previous relationships, it often is not the issue of who's in the wrong, but the matter of how to make it right.

Dr G's response to the unaware infected is "All ears with open communication is the only way to end all infections and accusations!"

Wake-up call for all political parties Premium
A welcome chance to reconnect
Royal endorsement sought for proposal of ‘Better Malaysia Assembly’
Why do I feel ‘heaty’?
Need for the great unboxing
Green energy: A move towards environment sustainability
Whither the Malay identity
A Malay tsunami in Melaka
HPV: Mankind not too kind to men
Don’t repeat Covid-19 mistakes