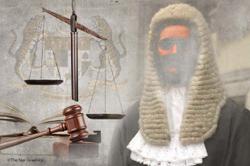 Unnecessary fuss: This Malaysian-made whiskey gained attention after winning an international award only to become embroiled in a supposed ‘controversy’ over its name. — Handout

MOST of us are guilty of making assumptions in some way. Even a name can cause controversy, which must have baffled many foreigners reading the recent news in Malaysia.

In the past fortnight, we’ve been in the news for all the wrong reasons. Again.

Celebrity entrepreneur Nur Sajat, who now resides in Australia, made it into the influential New York Times.

Despite being hunted by our authorities, she has found her way to Sydney. Her story has given the impression that we’ve treated her harshly, and for further national humiliation, it’s claimed that she was groped by religious officers.

They remain allegations, but it hasn’t helped Malaysia’s PR one bit, let’s be honest.

It cuts both ways with perceptions. It’s harmless, but it can also wreak unnecessary havoc.

When Sarawakian Tan Sri Idris Jala was announced as the chief executive officer of Malaysia Airlines, I’m quite certain many Malaysians in the peninsula – both Muslim and non-Muslim – assumed he is a Muslim.

The trouble with many of us in the peninsula is that we are rather ignorant, what with our baggage of racial and religious prejudices, a weakness often amplified by opportunistic politicians.

But they’ve succeeded in exploiting this narrative because there are enough voters who believe in them. Don’t only blame the politicians, though.

It’s common for Sabahans and Sarawakians to have Muslim names but be devout Christians. Idris is a Kelabit from Bario, which is known for its evangelical Christian activities.

Then there’s Datuk Seri Nancy Shukri, the Tourism, Arts and Culture Minister, also from Sarawak. It would be hard to find a Muslim in the peninsula named Nancy. Johan or Liza, maybe, but Nancy isn’t widely used. Neither is Selina, for example.

It took a long time for me to realise that Idris isn’t an exclusive Malay or Muslim name.

He told me that Idris is a Welsh surname, too. How foolish I’ve been all this time. While Idris is spelled identically in Welsh and Arabic, they mean different things.

Idris is the Muslim prophet mentioned in the Quran, a name associated with being righteous, studious, smart and learned in Arabic. In the Bible, he is called Enoch. In Welsh, Idris means “ardent lord”.

This ignorant writer had assumed all this while that the famous British actor Idris Elba is Muslim.

Following the recent controversy, I finally did some research. Idris isn’t even religious. He has declared himself to be someone of no faith.

Then there is Omar. Following the contention over the name Timah for a Malaysian-made whiskey, some people have also been irked by a whiskey named Omar available for sale here.

These critics claim Muslims would be confused by the Malay name and buy it.

Well, I know for sure that my many Muslim friends and family members would know they were in a liquor section if they strolled into one.

But here’s what my simple research has unearthed: Omar, Umar, Omer or Umer is widely used by Muslims, Jewish and Christians, especially in Spain. Admittedly, it’s a name used more by Muslims.

But the word “omar” also means “amber” in Gaelic, and the whiskey in question is owned by a Taiwanese distillery in the county of Nantou.

In Ireland, “omar” simply means “merry”, which is derived from the Gaelic word “meadhra”.

So imagine how stupid Malaysia would look if we listened to those pushing for a ban on this whiskey with an Irish name. Why can’t basic research be done before chucking a fit?

It’s good to know that some common sense has prevailed over the use of the name Timah for the award-winning Malaysian whiskey. Credit must go to PAS deputy president Datuk Seri Tuan Ibrahim Tuan Man for putting an end to the issue.

He said that Timah was neither a Muslim name nor a person’s name but a type of metal, adding that there is no man named Timah.

He also said that while liquor is prohibited in Islam, the rights of non-Muslims must be considered.

Timah’s manufacturers have explained that the name is derived from the Malay word for tin and the man pictured on its bottle is Captain Tristram Speedy, an English officer in Malaya during the British colonial period.

And correction, even “timah” is a Sanskrit word. The other word “bijih” comes from the Sanskrit root word “biji,” which, like many Malay words, originates from the ancient Indian language.

There’s even a brand of red wine named Hadi that’s bottled in Australia. You must have seen it on social media.

It’s incredulous how some politicians tried to justify corruption with points involving religion but, ironically, got riled up over a name for a whiskey.

It looks like all the hours spent reading Sejarah Melayu (The Malay Annals) has helped me a little in understanding and appreciating the beauty of Bahasa Malaysia, which has also adopted many English words and even Chinese ones.

Let’s not raise a fuss for the sake of it. Kacip Fatimah, a popular herb used to improve women’s health, including enhancing sexual function, has long been in use yet no one has objected to it.

What’s the root cause of these issues, really? It’s understandable if some people genuinely feel that Islam and Muslims are being threatened, but it’s a concern if it’s used as a tool by Malay-Muslim actors to outdo each other or create an illusion of a crisis to sell the cause of Muslim unity, as political scientist Dr Wong Chin Huat concluded.

As he said, it doesn’t help when such issues are countered with ridicule, which seems to be the hallmark of comments posted in social media, instead of intellectual arguments. Many of us are, regrettably, poor in civil discourse.

As Wong rightly suggested, issues need to be explained to debunk propaganda, and responses must be measured and calculated to avoid fuelling the sense of entitlement or insecurity.

He even went as far as to suggest that it’s Amanah/Pakatan Harapan operators who are attempting to weaken PAS by accusing the Islamist party of compromising its previous stands on many issues.

The bottom line is this: So long as politicians continue to play up race and religion, Malaysia will remain a dream unrealised after 64 years of independence.

We are also sending the wrong message to the world, especially since Malaysia needs more foreign direct investments. Please spare a thought for our country’s economy.

Malaysia is a modern, moderate and plural country. We are not a Taliban state.

The world will just move on and focus on improving while we continue to bicker over unproductive and inconsequential issues.

Unfortunately, all this has done is left us with a bitter taste.