Leap of faith. Hope to hop. Call it what you will, but ultimately, the self-serving surprises politicians spring on us are rarely welcome.

IF there’s one thing common among Sabah politicians, it’s them having belonged to more than one party. In fact, one even has the incredulous record of joining six.

None of them dares cast aspersions on anyone, especially their opponents, when they or their parties have been part of attempts to topple each other through sudden defections.

Well, let’s call them political frogs for their lack of moral principles and contemptuous disregard to honour the votes of the people, even if this behaviour doesn’t raise an eyebrow in Sabah.

It’s almost acceptable political culture in Sabah, these constant betrayals of trusts and hypocrisy. Their reasons for jumping ship purportedly to serve us (the people) better and more effectively simply insult us.

Curiously, it’s never about serving their own interests or their pockets, but always the people.

In 2018, following the May General Election, both Sabah Barisan Nasional and Pakatan Harapan ally, Parti Warisan Sabah, led by Shafie, won 29 seats each from the 60 state seats.

Parti Solidariti Tanah Airku (Sabah STAR) headed by Datuk Jeffrey Kitinggan, Pairin’s brother, came to Barisan’s rescue by pledging support of the party’s two seats to Musa, leading to the latter being sworn in first on May 10,2018.

Yet, the following day, four Sabah Umno representatives and two from the United Progressive Kinabalu Organisation (Upko) hopped to Shafie’s camp, leading to him being sworn in as CM.

Musa was asked to quit amid the turmoil of having two CMs, and in the court case he filed against Shafie and the governor Tun Juhar Mahiruddin, the court ruled against him, too.

In the eyes of the public, Musa and Juhar look to be at odds, and the murmurings turned from whisper to chatter when Juhar lodged a police report against Musa for alleged criminal intimidation, which Musa duly denied.

Basically, Shafie formed the state government courtesy of the six frogs from Barisan.

Fast forward to 2020, and Musa retaliated with the same tactic by having frogs from Warisan, Upko, PKR and DAP make up his total of 33 representatives for a simple majority.

Musa is upset that Juhar refused to see him, and Shafie has successfully denied his (Musa’s) plan by dissolving the state assembly for a fresh state election.

But the events of 2018, last week and 1994 must have been déjà vu for Parti Bersatu Sabah founder Tan Sri Joseph Pairin Kitingan, 79, another former CM.

In 1994, PBS won the state elections with a two-seat majority while Sabah Umno won almost all the predominantly Muslim majority seats.

It was an emotionally charged campaign, because Umno had just made its entry into Sabah, and almost the entire federal machinery was parked in the state.

This writer spent weeks in the state to cover the election and the Kinabalu Hyatt Hotel was where everyone seemed to be staying, including the federal ministers.

One could hear the ranting and raving among campaigners staying in the next room, or at the next table in the coffee house. It truly was an exciting time to be a political reporter.

There were allegations of systematic citizenship granted to immigrants to turn them into voters. The alleged plan goes by the monikers of either Project M – referencing former PM Tun Dr Mahathir Mohamad – or Project IC. To this day, it remains a bitter subject among Sabahans, especially the Kadazandusuns.

The project has been described as having changed the demographic electoral pattern of Sabah, as well as ethnic and religious factors.

Given the razor thin majority, Pairin hurried to the palace to get himself sworn in but was denied entry.

With his car parked in front of the gates, and his engine running to keep the air conditioner on, he found himself surrounded by a swarm of supporters, reporters, policemen and curious onlookers.

He waited 36 hours, during which a mobile toilet even had to be set up. As reporters, we took turns to keep vigil under the hot sun and a downpour for any developments.

Pairin was finally allowed in, but his government lasted only two weeks before defections, including his own PBS men, forced him to quit on March 17,1994.

It was worse in the 1985 state polls, where PBS also won with a slim majority, which was followed by a series of bombings in Kota Kinabalu and other areas, pressuring the PBS government to collapse.

Kuala Lumpur, which was backing Parti Bersatu Jelata Sabah (Berjaya) under then CM, Tan Sri Harris Salleh, was agitated by the PBS campaign to protect the rights of non-Muslims and Kadazan-dusuns.

Mustapha got himself sworn in as CM with 22 seats but was replaced hours later by Pairin after former deputy prime minister Tun Musa Hitam intervened requesting the democratic process be honoured.

However, Pairin’s government was so bogged by defections that he called a snap election in 1986, which strengthened his position with a sound majority.

Party hopping has never stopped in Sabah because there, it’s a culture of strong-willed political warlords with plenty of resources to reward and punish.

Political allegiance is non-existent in the state. To put it simply, almost all of them are up for sale in the eyes of the people. There are few honourable members of the state assembly, with honour a rare commodity, unfortunately.

He probably holds the Malaysian record for having joined the most parties.

Jeffrey is now the MP for Keningau and is the Deputy Tourism, Arts and Culture Minister at federal level.

Shafie began his political career with Usno and became an Umno member when Usno dissolved to bring Umno into Sabah in 1991. Suspended from Umno, he left to set up Warisan in 2016.

His arch-rival Musa also launched his political career with Usno, before becoming an Umno member.

PKR’s Datuk Christina Liew, a deputy chief minister, started out a PBS candidate in the Tawau parliamentary seat but then quit to join MCA, before leaving for PKR in 1995.

The late Stephen Wong Thien Fatt, the former MP for Sandakan, cut his teeth in Berjaya but quit to join Sabah Progressive Party (SAPP), before settling in DAP.

DAP’s Datuk Frankie Poon Min Fong, the state Health Minister, was said to be a strong supporter of PBS.

A fresh election – like what Shafie has done now – is futile if there’s no genuine desire for change in Sabah’s political culture.

It doesn’t help that the same strongmen continue to dictate the agenda in the state. And anti-hopping laws are pointless because these elected representatives can remain independents while giving their valuable votes to preferred leaders.

Not helping the cause is Sabah voters failing to give a strong mandate to their state government, which has constantly led to weak and unstable chief ministers who find themselves having to cut deals to increase their numbers.

The Land Below The Wind, well known for its beautiful people of all ethnicities and scenic mountains and seas, is however, tainted by dubious politicians who have earned the state the infamy of being the Land Of Political Frogs. 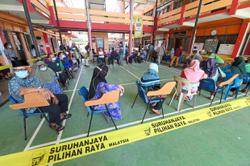 Voters turn up early to do their duty