IF there’s a lesson Malaysians must learn from the current Movement Control Order (MCO), it’s that food shouldn’t be taken for granted anymore.While we don’t lack food supplies, the MCO and crowd control rules at supermarkets have made it more difficult for us to get the essentials.

Then, there are many Malaysians, especially the poor, who have lost their jobs or are unable to work because of the MCO and are now struggling to put food on the table.

But as the world grapples with the Covid-19 pandemic and reels from fears of a paucity in food supplies, food security has been given well-deserved fresh attention.

In ordinary times (it’s strange to even describe this way, right?), a little virus wouldn’t even make for idle chatter. Besides, most governments have always given lip service to this subject, anyway.

As a recap, think about this – Singapore, which is almost entirely dependent since it imports over 90% of the food consumed, has emerged tops in 2018 and 2019 in the Global Food Security Index (GFS), which comprised 113 countries.

The GFS assesses people’s ability to attain affordable and quality food to meet their nutritional needs.

This is a country of five million people crammed in a landmass of just 715 square km, but the country knows that money has little value if there’s no food.

In the case of Malaysia, we were ranked 28th in 2019, but that’s a big improvement having been in the 48th spot in 2018. This is the harvest of our commitment in ensuring adequate food stockpile, which also includes the reduction of imports and better diversification of crops.

Food security simply means the availability of safe, sufficient and nutritious food to maintain a healthy and active life, according to the United Nations’ standards.

Singapore has taken food security so seriously that it has now started modern rooftop and vertical farms, in what it terms “the world’s first low-carbon, water-driven, rotating, vertical farm” for growing vegetables in an urban environment. 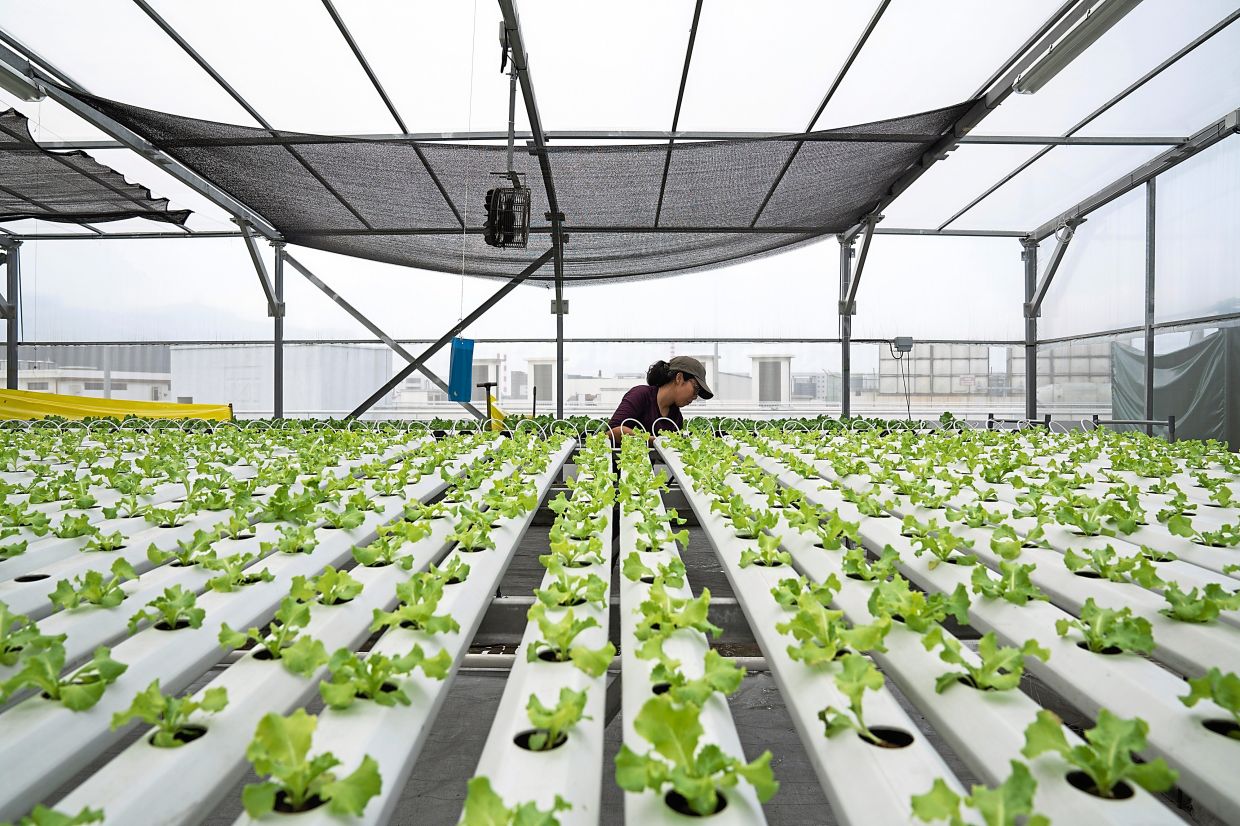 Those of us old enough to have been around would recall our dig at the late Tan Sri Sanusi Junid in the late 1980s for suggesting planting padi on roof tops when he was Agriculture Minister.

Last month, its Trade and Industry Minister Chan Chui Seng told Singaporeans that it has a fewmonths’ stockpiles and anticipates a break in the chain of of supply from Malaysia.

figures for the first time.

“Singapore has plans to manage a disruption of supplies from Malaysia through a combination of stockpiling, local production and diversification of overseas sources,” he was quoted.

The post Covid-19 period is an opportunity for fundamental reforms, as the Minister in our Prime Minister’s Department (Economy) Datuk Seri Mustapa Mohamad rightly pointed out.

According to a comprehensive paper titled “Achieving Food Security For All Malaysians” by Khazanah Research Institute (KRI), Malaysia is more food secure today, meeting various internationally-accepted criteria, unlike in the past, particularly during the colonial period.

“All major foods are available in sufficient quantities to meet market demand, which should not be equated with human needs. Production has improved for poultry and vegetables, while rice production is supplemented by imports.

“Food access is no longer an issue for most Malaysians, with better processing, transport and storage systems and distribution arrangements, for most major food items,” it said.

But food affordability has remained a very serious issue, and as our economy spirals from our weakening ringgit against the US dollar, food will surely become much more expensive.

It has been reported that our food imports for 2019 has hit almost RM60bil – which is certainly too high for a country with a population of 32 million people.

We aren’t in a food security crisis presently, but sadly, Malaysians have become poorer. That’s a fact, even if your employer – government or private sector – has yet to dock your pay.

The sharp drop in fuel prices is bleeding the country. Every US$1 (RM4.3) drop in oil price will result in a whopping RM300mil loss for us. And with prices plummeting to between US$20 (RM86) and US$25 (RM107) per barrel, we are looking at additional losses of between RM11.1bil and RM12.6bil. 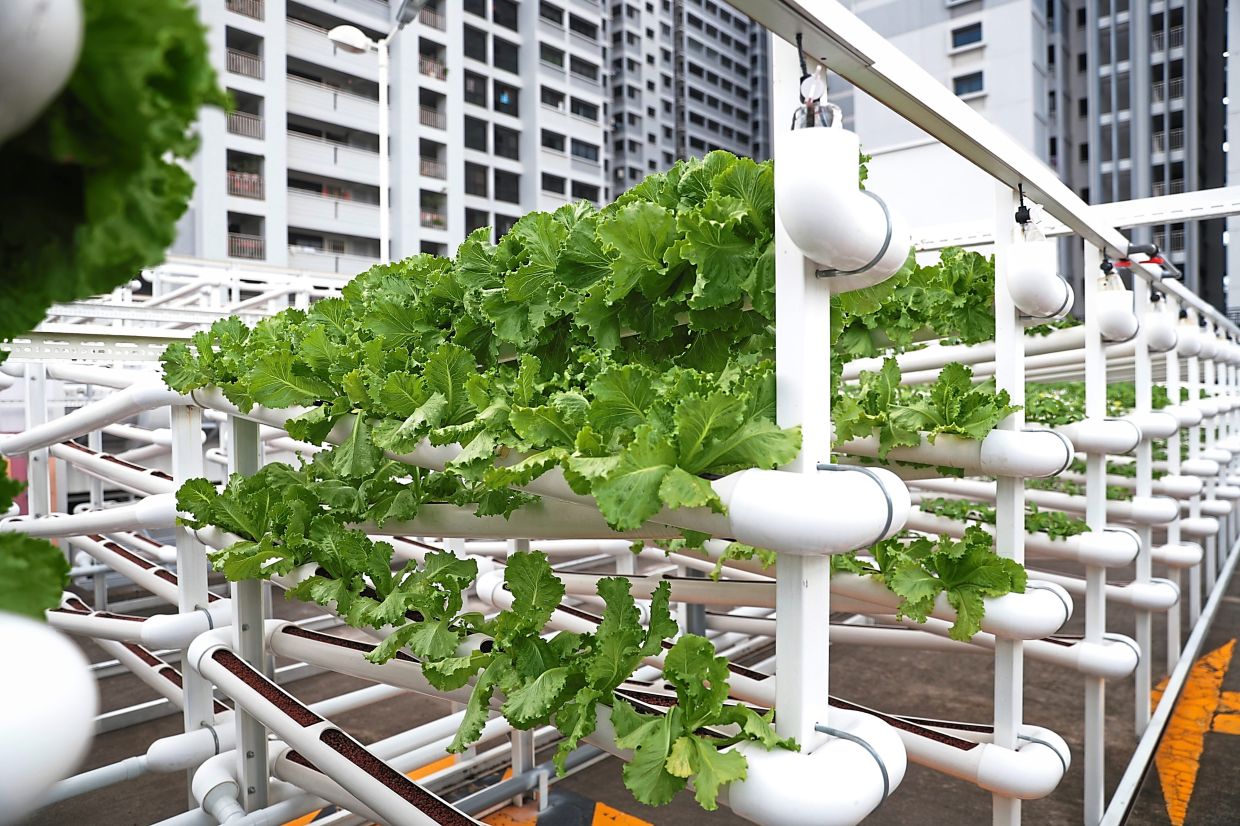 This rooftop farm in Singapore apparently can grow up to 25 different varieties of leafy greens.

The bottom line is this – we need to act fast to prevent a food security problem because the current pattern of food imports is not sustainable.

We need to review our food import and distribution system, including Approved Permits and import permits, which seem partial to certain parties. Pricing needs a relook, too.

The KRI findings cited beef, pork and chicken being much higher priced in Malaysia than in Australia.

“One reason for the high prices are the supply oligopolies, as import licenses are only awarded to a handful of importers.

“The higher price of beef compared to the export price from the major source country suggests oligopolistic market power by a few major imports,” it said.

In the report written in 2019 by Jomo Kwame Sundaram, Tan Zhai Gen and Jarud Romadan Khalidi, four policy recommendations were listed for consideration, including Malaysia’s commitment to producing enough rice for its people, embracing different policy options to beef up national food security and raise the quality of life for farmers.

A wide-ranging food security policy should be installed, so we have access to healthy and diverse diets. Sewing it all up is the need for food safety to gain greater policy consideration.

Basically, there can’t be a better time for us to back food producers and learn from the Chinese, Japanese, Taiwanese, Thais and the Dutch, given their ecosystem, value chain and delivery system.

More food production is about modern farming and aqua-culture methods with sound R&D.

We must stop wasting time trying to eliminate the middlemen, an unending fixation of many policy makers. However, studies indicate that government-run agencies are not practical with the multi-layer bureaucracy and office hours structure.

Middlemen have become a part of the ecosystem as they also support fishermen and farmers with loans and tools for their work, believes Universiti Kebangsaan Malaysia lecturer Madeline Berma, according to a news report.

Most armchair critics, in a simplistic and prejudiced way, prefer looking at middlemen in only black and white terms.

We must examine our way of life because we spend so much on food yet see so much of it go to waste.

According to the Solid Waste Management and Public Cleansing Corporation (SWCorp), the wasted food can easily fill up 16 Twin Towers.

Here’s another fact: we dump about 16,688 tonnes of food per day, an amount that can easily feed around 2.2 million people, three times a day.

This is a good time for all of us to reflect on our food production, consumption pattern and food security index in the most serious way we ever have.

Siddiq Fadzil in memoriam
Malaysia and China intend to collaborate to tackle inflation
Time to stop being lazy
Toying times between the sheets
Led by a contemporary generation
Borneo is stepping onto centrestage
Hope in our Rulers
Bold steps needed to end illegal racing
Rivalry of the ‘superheroes’
Where is Pakatan’s hunger for power?