Finding pleasure at the wrong place

Ikea China tightens security after an explicit video at one of its outlets went viral.

THE temperature is rising and Beijing is slowly moving into summer.

With the reopening of tourism sites and parks, enjoying the green nature is a common leisure activity for the local folk.

But for some it means going to an Ikea furniture store. The Swedish company has more than 30 outlets throughout China.

The Chinese visit Ikea for various reasons – to buy homeware or to satisfy their cravings for Ikea meatballs. Others just want to enjoy the free air conditioning, especially during warm summer days.

Every year, without fail, news of people sleeping in beds and on sofa sets at the giant furniture chain become a hot topic on social media, giving readers a good laugh over their ugly behaviour.

This year, Ikea made the headlines a little too early.

In the 16-minute footage, the unidentified woman – wearing only a blouse – was lounging on various sofas and beds in the store, oblivious to shoppers and children walking in the background.

The incident has sparked a controversy, with some netizens questioning if it was a publicity stunt by the company as they believed it was rather impossible for her to escape surveillance cameras. But this doubt has been dismissed.

Ikea China has issued a statement condemning such behaviour.

“In the future, we will tighten security and improve public cleanliness measures to provide a safe, comfortable and healthy shopping environment to customers, ” it said.

The company said it had reported the incident to the police where the outlet is located, but did not reveal the city.

The video has been promptly removed from Chinese social media sites.

But those who have watched it have speculated that the obscene clip was filmed in the southern Guangdong province as Cantonese dialect could be heard in the background.

According to the company’s website, it has four outlets at three Guangdong cities – Guangzhou, Shenzhen and Foshan.

Netizens also believed the video was taken before the Covid-19 outbreak because the shoppers were not wearing face masks.

Ikea stores nationwide were closed in late January and only reopened on April 8.

This is not the first time pornographic content was taken at public areas in China.

In January, a series of nude pictures of a woman, taken at an amusement park in Guangxi province, was found on the Internet.

In 2016, photographs leaked to the Internet showed a naked woman posing for photos at an Ikea outlet in Beijing.

In 2015, a couple filmed themselves having sex in the changing room of Japanese fashion chain Uniqlo in the Chinese capital. Five people, including the couple, were arrested.

Beijing, being the capital of China, has been observing very strict measures in the control and prevention of Covid-19, compared to other provinces.

It has yet to fully open up to outsiders.

A series of good news recently has raised the people’s spirit.

The Two Sessions – China’s once a year parliament sitting – will start on Thursday after almost three months’ postponement.

Apart from this, primary and secondary schools are also allowed to open.

However, experts have repeatedly reminded the people to remain alert to prevent the second wave of the outbreak.

The “semi-lockdown” of Shulan city in the northeastern province of Jilin and the return of Covid-19 cases in Wuhan are two examples of negligence.

Following the discovery of a new cluster in Shulan recently, schools and businesses are closed, public transportation stopped again and motorists who wished to leave the city must provide the test result of the virus taken within 48 hours.

The virus has also spread to the nearby Shenyang city in the adjacent Liaoning province after a patient attended a wedding celebration there.

So far, dozens of people from the two provinces have been infected and over 8,000 were placed under quarantine.

What’s worrying the government is that patient zero of this cluster has yet to be identified.

Wuhan – the epicentre of the pandemic which was placed under a complete lockdown for two-and-a-half months – reopened on April 8.

After 35 days of no confirmed cases, six people from a residential area tested positive for the virus on May 9.

Following this, the local folk are required to re-register with their respective residents committee and undergo tests for the virus again.

Therefore, it is still not the time to relax as minor negligence could lead to big trouble. 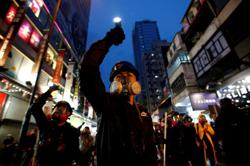