Of clashing events and hotheads

SINCE Malaysia lost in the AFF Cup semi-final on Tuesday in Bangkok, Thailand, Jay Chou can have his concert in peace at our National Stadium in Bukit Jalil, Selangor, tomorrow. Saying that may make me sound unpatriotic, but believe me, I am patriotic.

That is why I am not going to turn a blind eye to the embarrassing and unwarranted harassment of the Taiwanese pop star by our football fans.

For those unfamiliar with the recent controversy, Chou planned to have his concert at the stadium on Jan 15 as part of his world tour.

Unfortunately, the time needed for the concert crew to set up the stage clashed with the 2022 AFF Mitsubishi Cup matches, especially the much anticipated first-leg football semi-final between Malaysia and Thailand on Jan 7.

All 59,000 tickets available for the match were sold out. However, football fans were angered that some 21,000 seats had to be vacated as the stage under construction for the upcoming concert would block the view.

Had Malaysia qualified for the final, the second leg would have been held on Jan 16 at the stadium with the same limited capacity, creating another wave of uproar and negativity.

Youth and Sports Minister Hannah Yeoh had said the concert organiser booked the venue in 2019 and that the management had looked into ways to ensure the best for both events to take place successfully.

What many might not have known was that the organiser had rescheduled the concert five times before arriving at the present date, due to the Covid-19 pandemic.

The concert was initially scheduled for Feb 29, 2020, but was pushed to August the same year, and then to January 2021.

But since the pandemic was still raging, it was moved again to a date in February 2022, before settling on Jan 7 this year.

However, in May last year, the concert organiser announced another date change to a week later, to Jan 15, for unknown reasons.

Meanwhile, in July last year, it was announced that the AFF Cup 2022 was scheduled to be held between December and January this year.

Which party made the booking first is self-evident.

The stadium management was in a sticky situation as the concert had to go on and there was no other suitable stadium for replacement as the match venue.

Local football fans attacked Chou on social media with racist comments and demanded he cancel the concert, which was uncalled for and reflected badly on Malaysians.

Wiser heads tried to knock some sense into others and came out to explain the predicament, but were bashed instead.

The stadium management was not spared. They were reprimanded for allowing the concert to go on despite having our national team, Harimau Malaya, playing in an important match, and were deemed unpatriotic.

The stadium, the biggest in South-East Asia, is a national pride.

It is a much sought-after venue for international concerts and sporting events.

Cancelling an international concert will have repercussions.

The government is trying to boost entertainment tourism and such concerts bring in big crews, followers and international tourists who will be spending their money here, which is great for our economy.

It is likely that international fans would have booked their accommodation and arranged travel plans in advance. So, it will be unfair to cancel the concert at the last minute, although Chou left the decision to the stadium’s management.

If the management had decided to postpone the concert, what kind of impression would it have given other event organisers?

Will they be confident to book the stadium, knowing that their plans may be hijacked for other interests at short notice?

There is no doubting the football match’s importance, as the stadium is the national team’s training ground and can accommodate a large number of supporters to cheer them on.

Both events were important and required compromises by both sides.

The concert organiser had to delay set-up, while the football match had several thousand fewer spectators due to the clash.

Despite the limitations, the Jan 7 match went on smoothly and Malaysia beat Thailand 1-0.

And I hope Chou’s fans will have a great time at the show tomorrow. 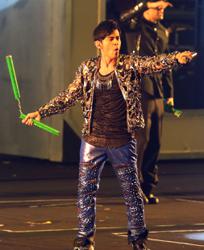