Chew (second from right) with the Myanmar Chin folk during a gotong-royong at a block of flats in their neighbourhood in Lobak.

FOR years, residents in Lobak in Seremban, Negri Sembilan, had been living with strangers in their midst who spoke a language no one else understood.

These outsiders, whom the local folk later learnt were of the Chin ethnic group from Myanmar, stood out as they looked and dressed differently.

Motorists driving along Jalan Velu and Jalan Manickavasagam will often see these foreigners, some of whom sported tattoos, playing futsal at a rundown pitch while the young ones loiter in the neighbourhoods.

Passers-by have also become accustomed to the sight of young Chin women trudging along the road with their babies snugly strapped to their backs in a sarong sling, a norm in Myanmar and rural communities around South-East Asia.

These scenes are now so common in the area that few people bat an eyelid.

But those living outside Lobak or neighbouring Temiang still have an uneasy feeling over their presence.

“I can’t recall one crime involving the Chin refugees since I became wakil rakyat (elected representative) three years ago.

“What saddens me is that most of them have been living here for more than 10 years and they still live in poverty,” he said, adding that there were some 100 Chin families living in the Lobak and Temiang constituencies.

For the record, the Chin people had to seek refuge in Malaysia due to decades of ethnic persecution in their homeland.

The Malaysian authorities allowed these individuals, who are United Nations High Commissioner for Refugees (UNHCR) cardholders, to remain here while they awaited resettlement to third countries.

Sadly, the resettlement did not come soon enough for many, forcing them to remain here for years.

Less than two percent of UNHCR cardholders are resettled to a third country each year.

Over and above the allowance they receive from UNHCR, these people seek low-paying menial jobs in the informal sectors because one of the conditions for remaining in Malaysia is that they are not permitted to work.

Since budget is tight, Chew said two or three families were living in cramped conditions in blocks of rented flats, which also housed locals.

They do odd jobs at the main market, food courts, construction sites and shops in the city to feed their mostly young families.

Non-governmental and religious organisations have also been helping out, providing them with basic foodstuff and meals for their children attending a community-run school.

Chew said the authorities should, on humanitarian grounds, consider giving permanent resident status to those who had been living here for more than a decade, so that they could work and earn decent wages.

“After all, it is not their fault that they remain stuck here and unable to move to a third country.”

Members of the Chin community, who can now converse in Bahasa Malaysia, are also friendly and often help out in gotong-royong activities organised by Chew’s service centre.

“In fact, there are more of them compared to locals whenever we have a session,” Chew said, adding that he had also given them grass-cutting machines to help keep their neighbourhoods clean.

Because of their refugee status, their children are also unable to attend national schools.

These children have for the past 11 years been attending lessons at Little Flower Learning Centre, a school run by members of the community.

According to school administrator Richard Tluang Hre Thang, the school currently has an enrolment of 35 children aged between five and 15.

“The parents pay a small fee while the children’s breakfast and lunch as well as stationery and school items are sponsored by well-wishers and NGOs,” he said, adding that the three teachers were also from the community.

The community pays RM700 monthly to rent the premises for the school.

Tluang said the children, who do not have electronic devices, have also missed out on learning as the school has remained closed due to the Covid-19 pandemic.

Seremban police chief ACP Mohd Said Ibrahim verified Chew’s claim that the Chin community did not give any trouble.

He said police had not received any report of them harassing locals or being involved in any serious crime.

“We had previously received complaints that they would gather to have alcoholic beverages where they lived.

“But in recent times, there have been no such complaints,” he said, adding that police also carried out regular patrols in the neighbourhoods.

The locals whom I spoke to at Iqbal’s food stall, located opposite a block that houses some of the Chin families, also had kind words for the community of foreigners who slog long hours to make ends meet.

“My son’s football team now has some Myanmar Chin boys in it.

“These boys are not ‘problematic’ as some outsiders perceive,” said Jega, a local who is among those helping the community.

Liza, an employee at a 24-hour convenience store across the street, agrees.

“They may look fierce with their tattoos, but they are actually quite timid when they engage with locals,” she said.

Based on statistics from the Home Ministry, there are almost 180,000 UNHCR cardholders in Malaysia as of June this year, up from 140,000 registered in 2013.

And as of March, 90% of the refugees registered with UNHCR in Malaysia were from Myanmar.

The Malaysian authorities had included all UNHCR cardholders in the National Covid-19 Immunisation Programme.

It will also be good if the laws can be reviewed to enable these individuals to work legally – since there is a dearth of foreign workers now – to enable them to live a little more comfortably and avoid being exploited while they await resettlement.

Another consideration to ensure the young refugees don’t miss out on education, is allowing them to attend government schools.

There may still be hope for these individuals as Home Minister Datuk Seri Hamzah Zainuddin had in June indicated the government’s willingness to consider them to help the Malaysian economy grow.

This, as Hamzah had aptly said, would be a win-win situation for everyone. 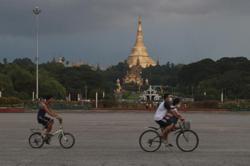 Not the end of the line
Made for Malaysia
Melaka polls: Big wins, small wins
Take the chance to travel, but travel responsibly
Wake-up call for all political parties Premium
A welcome chance to reconnect
Royal endorsement sought for proposal of ‘Better Malaysia Assembly’
Why do I feel ‘heaty’?
Need for the great unboxing
Green energy: A move towards environment sustainability