‘I told you so’: Trump showing off a copy of USA Today’s front page featuring his acquittal in the Senate impeachment trial, as he arrived to address the National Prayer Breakfast in Washington. — Reuters

ANGOLA, Haiti and Cambodia are “Banana Republics”: countries where the rule of law has been traduced by a man or woman or group seeking their own aggrandisement.

There is a new addition to this list: the United States of America. As one of the oldest and proudest of the world’s democracies, this country’s appalling downgrade is testament to one man’s work.

His name is Donald Trump and he is the 45th President. TV reality show star, charlatan and bigot, Trump has tweeted his nation’s principles – as articulated by the Declaration of Independence, Constitution and Bill of Rights – into a pulp.

Of course, he had help. He has been ably assisted by a coterie of men and women known as “Republicans”. In the years to come, as historians pore over the catastrophe that is the Trump Presidency, tracking its dismal, neo-fascist trajectory, one of the most important dates will be his acquittal by the US Senate from impeachment charges of abuse of power and obstructing Congress on Feb 5,2020.

The Americans have demonstrated that the highest office in their land and the most powerful in the world – the Presidency – can be manipulated for personal gain, that their political elite will actively enable this.

Across the Atlantic, a buffoonish Old-Etonian turned hack journalist turned politician Boris Johnson has parlayed Brexit to not only propel himself to 10 Downing Street but also persuade the UK’s working-classes to vote against their own interests.

Membership in the European Union was more than just about common markets and free movement. It was limiting, but that’s precisely the point: all its members accepted the EU’s strictures to create confidence and hence, the conditions for peace as well as development in their continent.

All of that has gone out of the window now.

If the Yanks who want to “Make America Great Again” are living in a Banana Republic – their British cousins who want to “regain control” via Brexit exist in a posh-boy rerun of Downtown Abbey crossed with 1917 and the Raj Quartet.

What happened? How have centuries-old democracies become so fragile and even self-destructive?

First: inequality has gotten out of hand. The neoliberal, trickle-down economic policies launched by Ronald Reagan and Margaret Thatcher in the late 1970/80’s fuelled a massive shift in prosperity from workers and the middle-classes to owners and shareholders. Real wages stagnated and tax policies benefited the recipients of dividends not generated by their own labour.

Subsequently, more centrist leaders (such as Bill Clinton, Tony Blair and Barrack Obama) maintained much of the same policies. And the numbers don’t lie.

When Thatcher came to power in 1979, the UK manufacturing industry employed 6.8 million people – by 2016 this had fallen to 2.6 million.

In 2017, three of the US’ richest individuals collectively held more wealth than the bottom 50% of their country’s population –160 million people. Gini coefficients (a measure of inequality) are shooting up on both sides of the Atlantic.

Moreover, the advent of social media allowed fake and demagogic information to be spread quickly as well as unchecked, shifting the national discourse and mood almost at will.

Meanwhile, ethnic and religious minorities as well as women – rightfully – sought greater representation in the public life and culture of the West.

However, the failure of the Anglo-American elite to address the above-mentioned inequalities led the white-majority working classes to feel that their leaders were more interested in playing identity politics than protecting them.

At the same time, a refugee crisis emanating from the Middle East and North Africa (in the US, the refugee crisis is predominantly Latino) heightened white anxieties over being displaced in their own countries.

This gave the opportunity for Trump and other demagogues to rise. Economic inequities and cultural insecurities fuelled white nativist impulses.

It’s not clear if the progressives can blunt this wave (Labour’s Jeremy Corbyn failed dismally) and the chaos in Iowa Democratic Party caucuses only underlines the gloom.

We, in Southeast Asia must learn from the fragility of these Northern Atlantic democracies.

Their mistakes aside – democracy is still the best way forward – especially for multi-racial and multi-religious countries.

What’s key is to avoid the pitfalls the West fell for. We must address the growing inequality of our societies. Growth alone will not bring stability and peace.

Leaders ignore warning signs like this at their peril. We must invest in our people: their safety, health, education and skills.

Next, social media must be brought to heel. Hate speech and deliberately provocative postings must be curbed without resorting to undue repression.

The obvious racial and religious fissures in our societies must be managed very carefully. Common ground needs to be found – or created – between our majority and minority communities.

And we must remain engaged: both informed about the issues and vigilant against cynical manipulators of our insecurities.

It may seem like a daunting task when our former colonial masters and role models have failed so miserably. There is no choice. We cannot join the Americans and the British in rubbish dump of history. 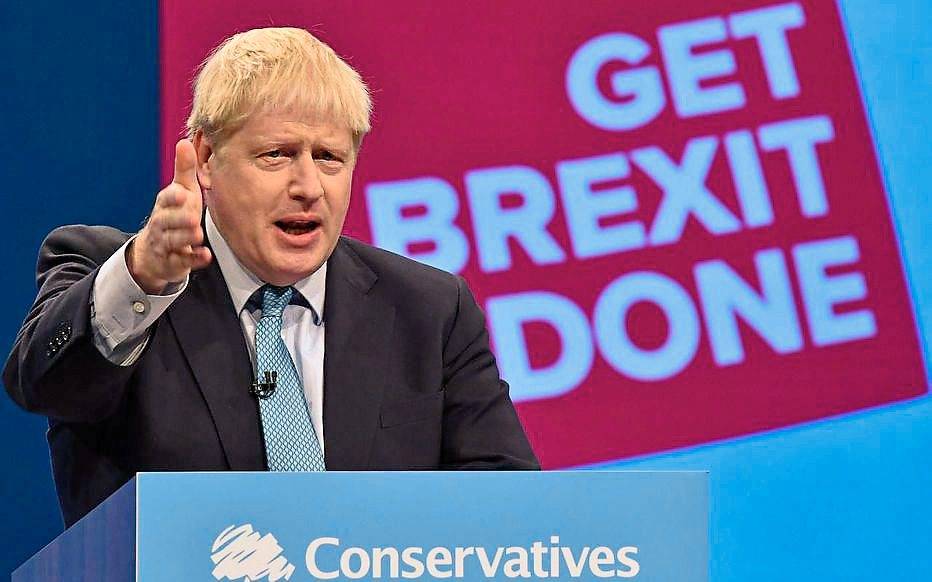 ‘I told you so’: Trump showing off a copy of USA Today’s front page featuring his acquittal in the Senate impeachment trial, as he arrived to address the National Prayer Breakfast in Washington. — Reuters

Primary fiasco: The results of the Iowa caucus was delayed due to vote-counting system failures. — AP

Trump delivering the 2020 State of the Union Address. – AFP

Boris Johnson’s 2019 election campaign was founded on his goal to ‘Get Brexit Done’. — AFP

When Thatcher came to power in 1979, the UK manufacturing industry employed 6.8 million people; by 2016 this had fallen to 2.9 million. — AP