History repeats itself with the Taal volcano

WHEN Adriano O. Mantiel, a 46-year-old maintenance worker in the Rizal province (about 16km east of Manila), wiped ash from his mobile phone screen last Sunday, he knew something was wrong.

As he told Team Ceritalah: “I thought that it was rain. But when it happened, my allergies immediately reacted. I began sneezing. My eyes became very red and I had trouble breathing.”

“It” was last week’s eruption of Taal volcano, which is almost 70km to the south of Manila in Batangas province. This is its first seismic activity in well over 40 years.

Indeed, the sight of Taal erupting and images of a huge, terrifying plume of ash rising up into the heavens, accompanied by flashes of thunder and lightning, were relayed across the globe by social media within minutes.

The Philippine island of Luzon (where both Manila and Taal are located) ground to a halt almost immediately as flights in and out of the island were diverted or cancelled, the stock exchange closed and businesses shuttered. It was as if the entire 24-million-strong conurbation of Metro Manila, anticipating worst, held its collective breath and fell silent.

Of course, the greatest fear was for those living closest to the volcano, perhaps the most intriguing in South-East Asia’s “Ring of Fire” that extends from the Philippines in the north, through Indonesia’s Sulawesi and Maluku to Java and Sumatra in the far west.

The diminutive Taal volcano is located on a small island in the middle of an impossibly beautiful caldera lake. The latter’s ridge is dotted with small towns such as Tagatay that have been transformed over the past few decades into a playground for rich Manilenos – with the plutocrat restaurant hangout Antonio’s (where billionaires “helicopter in” for lunch) and the bucolic boutique hostelry Sonya’s Garden leading the way.

But on Jan 12, everything changed. What followed was a mad scramble as authorities raced to evacuate the communities near the volcano – leaving both establishments closed. Within four days, some 82,000 people were displaced as losses in the millions mounted up.

It’s not as if there was no warning: Taal has been at a Level One Alert since March 2019 due to monitored volcanic earthquakes. Moreover, the volcano has been extremely active over the centuries, with over 34 recorded eruptions throughout the volcano’s natural history.

And yet, people still choose to live or visit here. In 2018, the nearby town of Talisay alone reportedly received nearly 600,000 visitors.

For those of us who live outside the “Ring of Fire”, on mainland South-East Asia and the island of Borneo, it’s hard to imagine the precariousness of life surrounded by volcanoes and the possibility of earthquakes, tsunamis and even soil liquefaction – most evident during September 2018’s Palu tsunami when the ground itself lost its strength and tactility and literally dissolved into a sea of molten mud.

For Malaysians and Thais, such concepts are unimaginable. We can take the land for granted because for us, the earth itself is immutable and unchanging.

Still, the ash fall, while dangerous to inhale, brings enormous benefits, enriching the soil with nutrients that later provide for spectacular harvests.

Mantiel, who watched the explosion on TV, was surprised at how thick the ash in his neighbourhood was despite being 84km away from the volcano.

He asked his wife to purchase face masks, “But most stores ran out of stock with profiteers cornering the market”.

And it gets worse.

The Philippine Institute of Volcanology and Seismology has issued a Level Four alert, indicating a high probability of yet another hazardous eruption. Based on historical data, there are not one but two worst-case scenarios. One: An eruption that takes place over a few days. The other: The eruption lasts for weeks. Additionally, further earthquakes and tsunamis are entirely possible. The last few days have been a tense waiting period to see if the eruption will intensify or sputter out.

Mantiel has already lived through a previous eruption: Mount Pinatubo in 1991. He remembers vividly how destructive it was, the way lahar (a type of mudflow comprised of pyroclastic material, rocky debris and water) would engulf whole villages.

Even I can still remember wiping the ash from my car windscreen in Kota Kinabalu some 1,120km away that year.

Mantiel remains traumatised by his experiences with Pinatubo. “Even though the ashfall has subsided slightly, I still feel it’s unsafe. I refuse to let my children go back to school.”

However, most of those displaced are desperate to return to their homes.

Mantiel sympathises. They cannot afford to wait around in shelters and there’s little that the authorities can do to prevent them leaving.

“I understand because all they want is to go back and save their livestock, because that is their only way to make a living. If I were in their shoes, I would also try to save all I can.”

And amid the carnage, one local structure has come to represent the resilience of the area, its people and indeed, the Philippines as a whole.

First built in 1575, the Minor Basilica of Saint Martin of Tours (or more simply, “Taal Basicilia”) is the largest church in the Philippines and Asia, spanning 88.6m long and 48m wide.

Initially built near the shores of the Taal lake, it was destroyed in 1754 by a then-largest recorded eruption of the volcano.

It was then rebuilt further away on an elevated hill facing Balayan Bay but was damaged by earthquakes in 1852 and 1942. It was only restored in 1953 and again in 1972.

Hopefully, this beautiful church will survive the latest disaster.

But one has no doubt that any damage will be repaired, and life will continue in and around Taal.

Living in the Ring of Fire 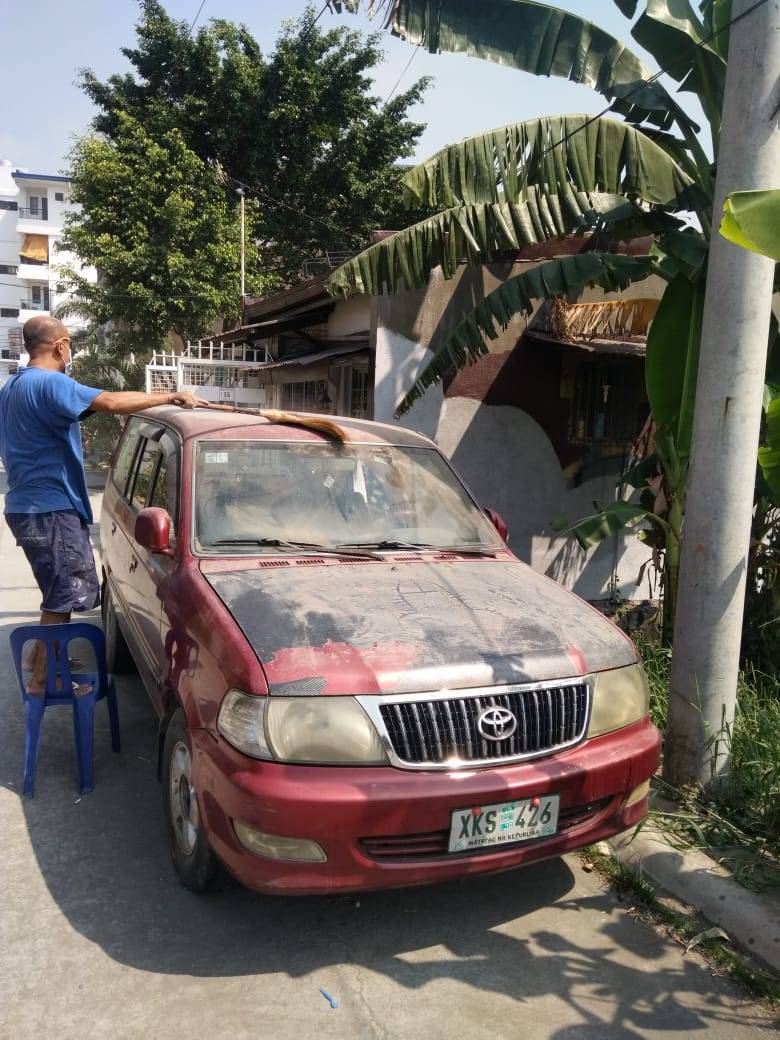 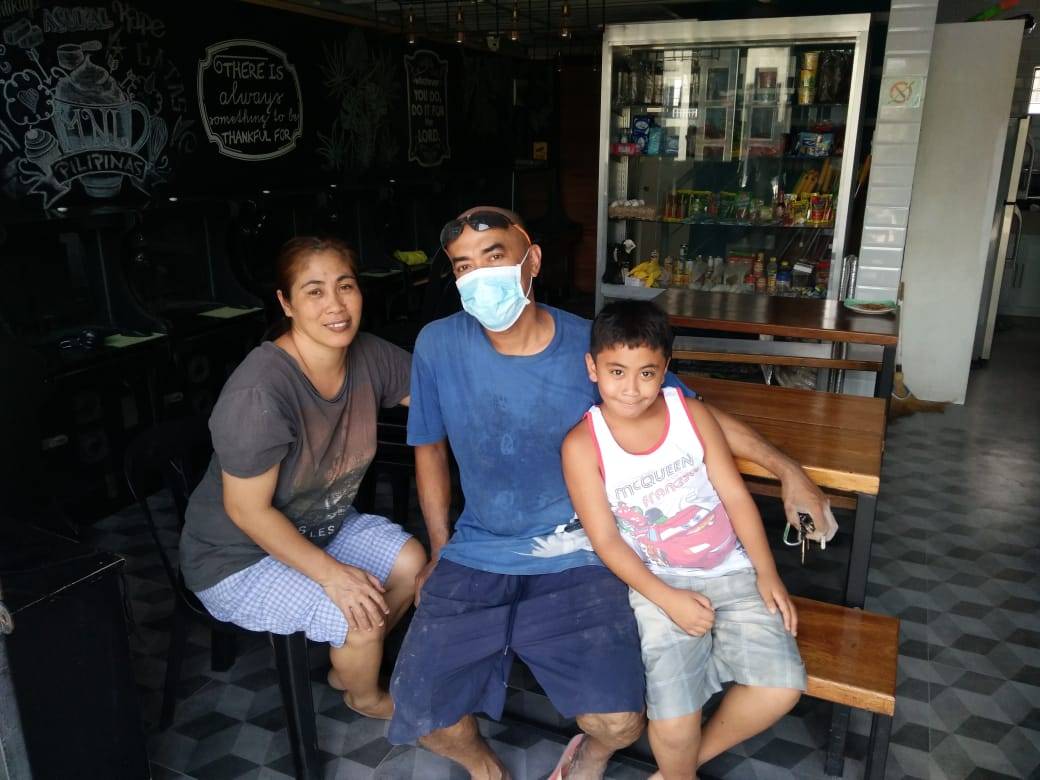 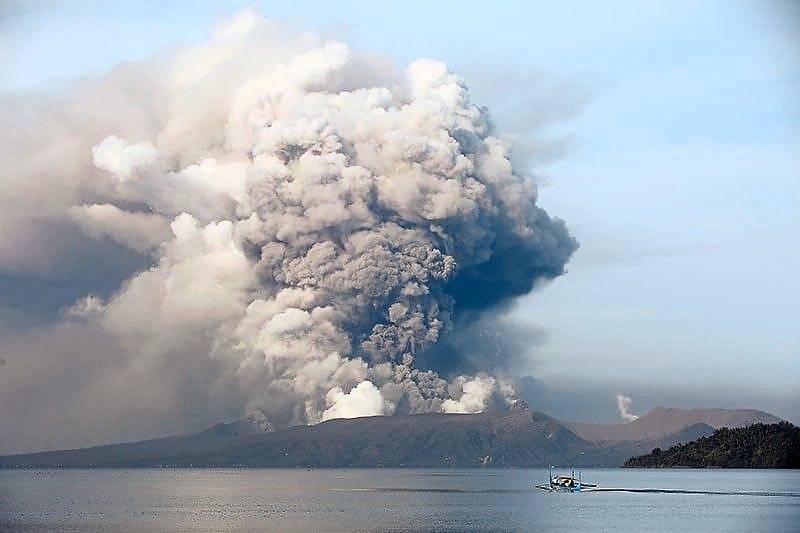 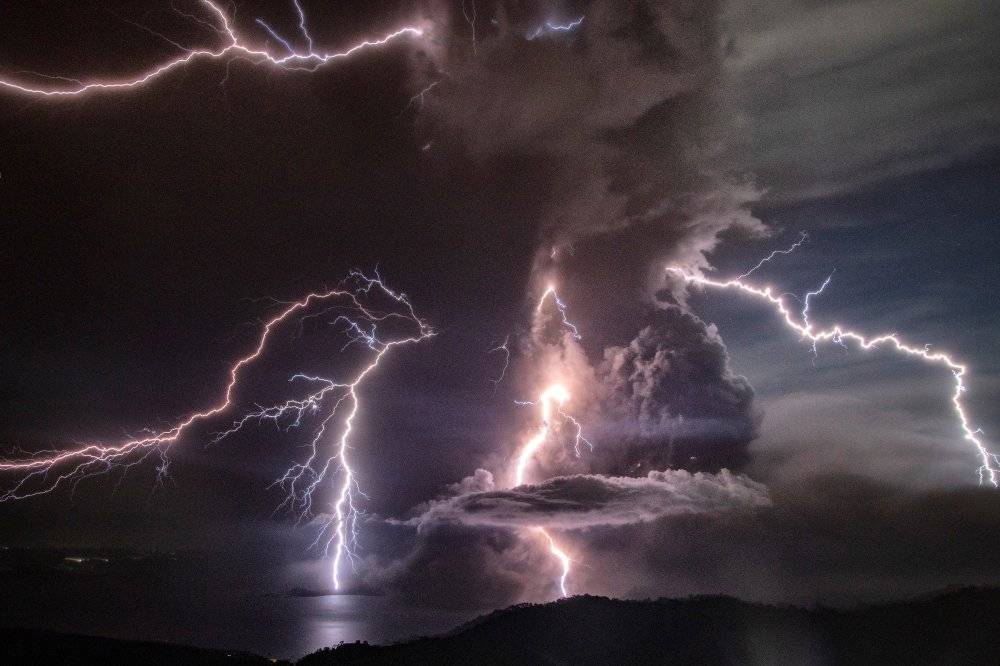 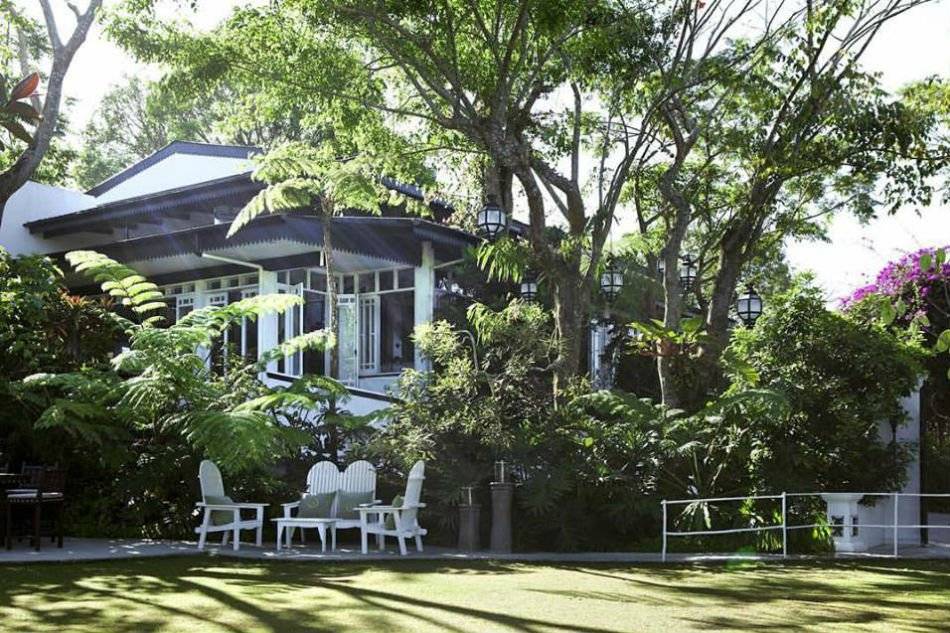 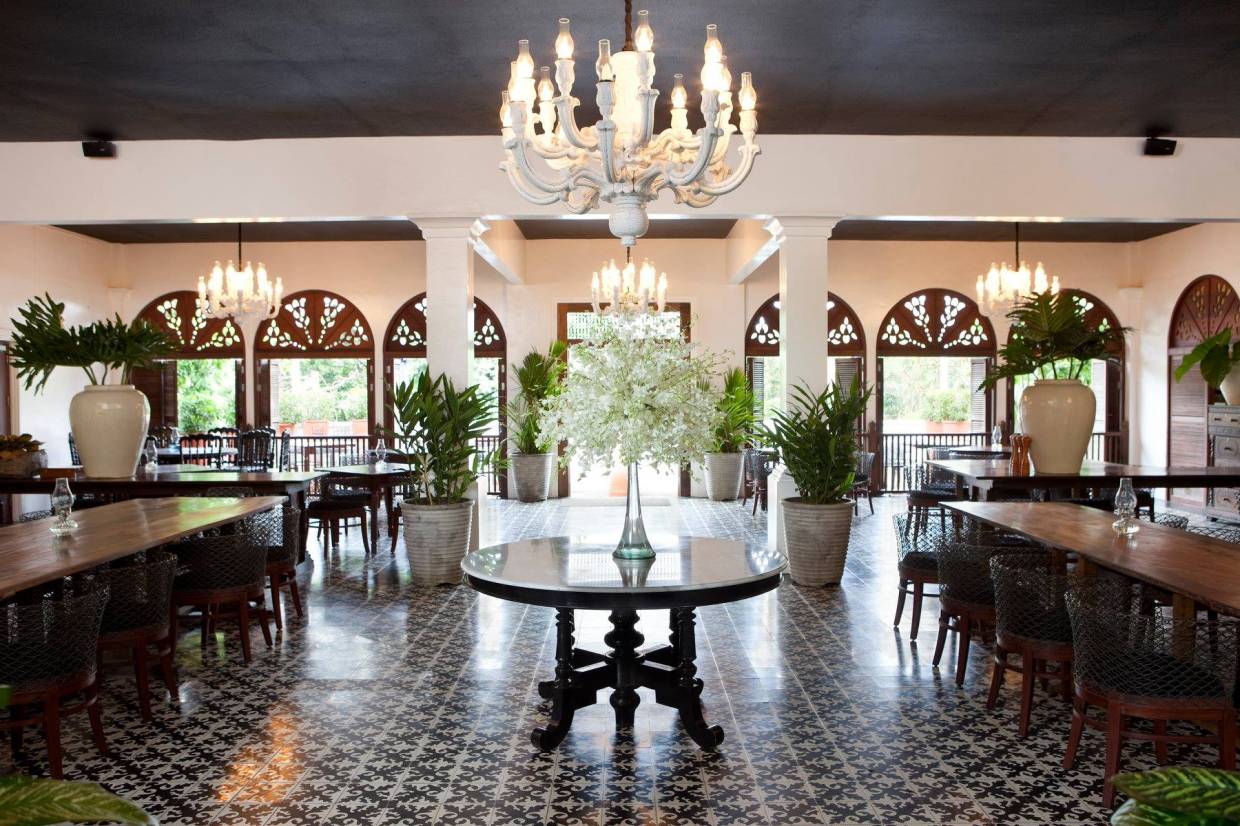 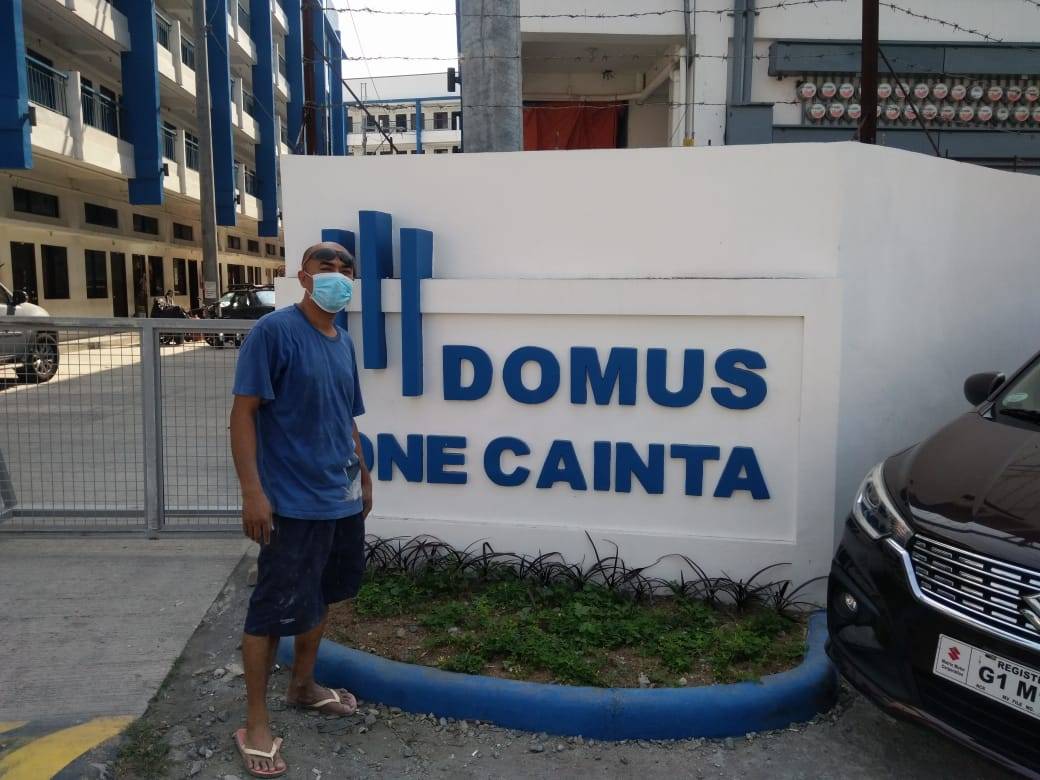 Lightning strikes through a column of ash surrounding Taal’s crater on Jan 12, seen from Tagaytay city.

Taal Volcano Erupts In The Philippines

Adriano sweeps the ash off his car.

Adriano with his wife and son.

Taal spewing ash into the air, as seen from a distance.

All the establishments Antonio’s Group of Restaurants boast stunning views of the Taal volcano.

Lightning strikes as a column of ash surrounds the crater during the eruption.

Taal Volcano Erupts In The Philippines

Rich Manilenos often helicopter in for lunch at Antonio’s and hang out at the bucolic boutique hostelry Sonya’s Garden.

Antonio’s – currently closed – is an upscale restaurant in Tagaytay often frequented by the Manila elite.

Mantiel, 46, has been a maintenance worker at this condominium for the past four years.