THE mercury is rising in the Johor DAP election, and the political mood has been hot enough to bring party elder Lim Kit Siang to go all over Johor last weekend.

The man known as Lau Da or elder brother in the party was said to be “campaigning” to save Senator Liew Chin Tong, who is struggling to hold on to the state DAP chairman's post.

The Johor polls is of particular significance to Kit Siang, who is Iskandar Puteri MP, and he is keen that Liew should continue to lead in Johor.

Liew, 43, is a devout ally of DAP’s powerful Lim family and Kit Siang is trying to ward off a crisis.

The Johor political landscape is not clear-cut like in Perak. But there are three political camps in Johor - one is led by Liew, another by his former aide and Skudai assemblyman Tan Hong Pin and the third by former strongman Dr Boo Cheng Hau.

Tan, 40, was also a former protege of Dr Boo, 56, but the two have fallen out and are no longer on speaking terms.

However, both Dr Boo and Tan are trying to bring down Liew.

The former deputy defence minister is under siege. The Chinese vernacular media think that Liew is in trouble and will be toppled.

But how can that be?

Liew has brains, he is known as the party strategist and is the author of several books. He enjoys the trust of the Lim family having been a top political aide to Kit Siang as well as former Penang chief minister Lim Guan Eng.

“He has brains yes, but no base, ” said a think-tank researcher.

Liew is also believed to have at least half the 14 DAP state assemblymen and all of the five MPs in Johor on his side.

That is a pretty formidable back-up except that not all of them have the grassroots base that can deliver the votes.

Liew is also troubled by accusations that he had persisted in wanting to engage Tun Dr Mahathir Mohamad even after the Pakatan Harapan government fell.

Liew had also slammed Barisan Nasional politicians who were appointed senators in order to join the Cabinet as “backdoor ministers” but became a backdoor appointee himself after losing in the general election.

“Many of our grassroots leaders were whacked by the Chinese community. They had to face ordinary people on issues like Jawi and UEC (United Examination Certificate), they could not answer. They became the punching bag, ” said Teng.

Tan, the perceived challenger to Liew, has been coy about whether he is aiming to be the next Johor chief.

Tan is the state party secretary but he is clearly the underdog. He does not have the national image of Liew nor does he have Kit Siang out there campaigning for him.

He has described himself as a scapegoat who gets blamed when things go awry and has hit out at Liew for being afraid of his own shadow.

But underdogs can pose a dangerous threat when the ground is unsettled and it is up to Tan to tap into the bubbling discontent.

Some have claimed that the political mood in Johor DAP is at a boiling point. It sounds rather dramatic but for sure, it is a keenly fought state election.

The Australia-educated Liew was among the first batch of young, promising professionals brought in at the turn of the century to help broaden the traditional Chinese image of the party.

They see themselves as Malaysian First and are able to connect with the urban middleclass electorate and engage the Malays.

But this group is now portrayed as parachutes reaping the fruits of the blood, sweat and tears of the traditional base.

Much of it had to do with the fact that they were the main beneficiaries of Pakatan’s stint in Putrajaya but failed to live up to the expectations of the Chinese base.

The divide between those who see themselves as Chinese First and Malaysian First has widened and the thing is that only Kit Siang has the clout to bridge that divide.

There are 40 candidates vying for 15 seats in the state line-up. DAP’s two-tier election system will see the 15 winners elect the office-bearers from among themselves.

Liew’s senatorship comes to an end on July 17 and he needs to win this fight in order to vie for a seat on the national leadership line-up and to stay relevant until the general election.

The formation of new branches and the delegates that come with it have helped the incumbents win well in states like Perak and Penang.

It is unclear whether Liew’s group has also managed to form new branches that could expand his vote base and trump his opponents.

All the election rivalry seems to have unsettled the normally unflappable Kit Siang.

He has praised DAP as a solidly united party one day and the next day, warned that enemies were gleeful the party has become chaotic while at the same calling on members to end the divisiveness.

It drew a classic response from Selangor’s Teng who said that in a game of mahjong, it gets noisy when the tiles are being shuffled for the next round.

“If you cannot stand the noise then leave the game, don’t get annoyed and try to overturn the table, ” he said in a Facebook post.

It was a timely reminder to his party that democracy is a noisy process. Contests and rivalry are part and parcel and, like a mahjong game, it has many rounds.

The trouble is that this particular mahjong game is getting too intense and noisy for the liking of some party leaders. 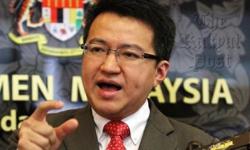