DAP’s Nga emerges as the only 'tiger on the hill'

DAP delegates attending the Perak state convention were stunned when their MP for Kampar Thomas Su "erupted like a volcano" over what he claimed to be unfair procedures in the state party polls.

They had never seen him behaving like that, swinging his arms and pointing fingers while complaining at the top of his voice that delegates aligned to incumbent Perak chairman Nga Kor Ming were still being allowed to register to vote after the cut-off time of 10am. 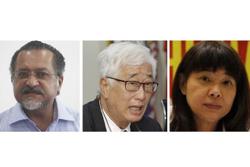 Our Constitution is working
King’s powers and the Constitution
Ramping up the likeability factor
Culture and the arts under threat
Rumour-mongers going on overdrive Premium
Out of this world cultural relics
Going forward with backwards climax Premium
Register, keep your appointment – let’s all heal faster
A timely royal meeting
A for effort