Johor and Perak MBs under siege

TUN Dr Mahathir Mohamad is fighting too many fires.

The Prime Minister recently had to throw cold water on rumours that the Mentris Besar (MBs) of Perak and Johor would be replaced.

Perak MB Datuk Seri Ahmad Faizal Azumu has been under siege for months and text messages had been circulating the past few days that the state government would fall yesterday.

Of course, nothing like that happened although Faizal must have felt like he is clinging to a coconut tree on a windy day.

But speculation about Johor’s Datuk Osman Sapian was sparked off by his handling of the Pasir Gudang pollution crisis.

The poisoned river crisis has been a fiery topic on Facebook. No one seems to have anything good to say about the way the issue was managed, and the MB as well as the ministers involved have been lampooned by netizens.

The government’s decision not to declare a state of emergency was perceived as uncaring by many Johoreans.

Pictures of government officials and the clean-up team decked from head to toe in protective clothing and face masks were met with comments such as: “the minister wears this, but residents are told not to panic.”

To compound matters, the culprit or culprits have yet to be charged or even named, causing speculation that the factory in question is being protected by the authorities.

Nothing like this has ever happened in the state and although the assemblymen and MP concerned were there for those affected, people had expected the Mentri Besar himself to take charge and be hands-on.

Instead, Osman left for Germany on a tourism promotion trip the day that school-children and those living along the poisoned river began falling ill.

By the time he returned about six days later, the crisis was in full bloom and disappointment had bubbled to the surface.

And as if that was not enough, Osman left for Batam for another tourism event last Friday.

That was when Dr Mahathir had to come to the defence of Osman.

Dr Mahathir is still the pillar propping up the Pakatan Harapan government. But his party has become the weak link in the ruling coalition, be it the fake academic qualifications of Bersatu leaders or their performance in the government.

The Bersatu chairman is known for his high standards, he is always lecturing Malays to work hard and strive to be the best. Yet his own party is known for leaders who are far from the best.

But Osman is quite secure for now. No one can unseat him as long as he has the backing of the big boss.

However, Faizal or Peja as he is known among the political circles in Perak, is about to face another round of intrigue and back-stabbing as he prepares for the next sitting of the state legislative assembly.

Many people were texting each other yesterday morning to ask whether the Perak government had changed hands.

It was the third time in the last one month that rumours of the state government falling on such a day had circulated.

The Prime Minister has said that he is satisfied with Faizal’s performance, which is as good as declaring that he will not entertain any Pakatan coup against the lone Bersatu assemblyman.

Faizal’s problem is that his enemies also come from within his own ruling coalition.

The enemy within is often more dangerous because their knives are hidden behind their smiles.

This time around, Faizal will also be up against a united and emboldened Malay opposition. The “newly-weds”, that is, Umno and PAS, have emerged as a new political force and even Datuk Seri Mukhriz Mahathir will have to watch out in Kedah.

“Smoke in the sky can only come from a fire.

“Murmurs of a takeover in Perak is a reflection of the weak leadership of Faizal,” said Farhash Wafa Salvador, the Perak PKR chief who is famous for his blunt opinions.

Farhash claimed his party had been sidelined for speaking up.

He had questioned the Mentri Besar’s decision to award 400ha of forest land without open tender to a RM2 company as well as his mishandling of land rights to the orang asli.

“A person is on borrowed time when his survival is being questioned rather than his merits defended,” said Farhash.

Former Perak Umno warlord Datuk Radzi Manan said Faizal should be given some time to focus on what Perak needs.

“His plans will become clearer by the second year,” said Radzi, whose daughter is married to Faizal.

The opinion in Perak political circles is that Faizal will have a bumpy ride, but survive a full term because Umno is not interested in a coup.

The Umno leadership does not want to repeat the experience of going in by the side door. They know it will make the rakyat so angry that they will kick the party out of the door in the general election.

However, Pakatan leaders need to take heed of the brewing Malay sentiment out there.

“Just a year ago, we could not sit in a coffeeshop for even five minutes because people were so critical of Umno.

“Nowadays, the coffeeshop talk is all about the Pakatan government. They are not saying good things,” said an Ipoh-based Umno politician.

The topic of conversation among the Malay chattering class has also shifted somewhat from cost of living issues to the role of DAP leaders in the government.

Rightly or wrongly, there is a ballooning perception among the Malay electorate that the government is dominated by DAP, something that should be triggering alarm bells in Pakatan.

The Malay groundswell against Pakatan is reminiscent of the Chinese mood against Umno and Datuk Seri Najib Tun Razak prior to the general election.

Pakatan leaders should take note and act to arrest the momentum before it gets out of hand. 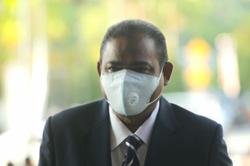