ALMOST everyone who has met Tun Daim Zainuddin in recent times has been struck by how much he has aged since his heyday as the country’s economic czar.

He is 13 years younger than his longtime friend Tun Dr Mahathir Mohamad but looks older.

But appearances can be deceptive because Daim is once again the dynamo behind Dr Mahathir, assisting the Prime Minister to lay out the groundwork of a new vision for Malaysia.

Despite some rumblings among MPs from both sides of the divide over the Council of Eminent Persons, Daim enjoys the confidence of Dr Mahathir and the CEP is set to continue its work.

Some of those who have been invited to give feedback to the CEP over the past few months suggest that its work could lead to a policy to replace the NEP or New Economic Policy, an affirmative policy that has unfortunately been divisive to national unity.

Or as KRA strategy director Amir Fareed Rahim sees it: the CEP will be there to assist the government in building a new economic vision for Malaysia and in mapping out institutional reforms.

“The credentials of the council members helped in calming the market during the transition.

“But moving forward, the members of the council should be appointed structurally within the PM’s office, with a clearer scope and mandate on its advisory role,” said Amir.

A more clear-cut outline of its role, purpose and mandate will help quell the disquiet out there that Daim is, once again, too powerful.

A lot of that has to do with his purported role in the dismissal and appointments of top civil servants and GLC heads, which led to whispers in political circles that he is Dr Mahathir’s kitchen Cabinet.

For instance, the appearance of the then Chief Justice to meet the CEP at Daim’s Menara Ilham office earlier on created a stir.

Summoning corporate leaders and GLC heads was one thing, but for a judge to go there, it was bad optics.

The perception was that the council had overstepped its advisory role.

Daim has also become an issue in the PKR election, accused by some party leaders of being part of a conspiracy to stop Datuk Seri Anwar Ibrahim from becoming Prime Minister.

The PKR rank-and-file have always been suspicious about the two Tuns whom they blame for Anwar’s ouster in 1998, and they are not comfortable with what they see as the growing influence of Daim.

Daim has laughed off the allegation, saying Pakatan Harapan had long decided that Anwar would be Prime Minister, the implication being that the handover is a done deal.

Daim, who is often seen as some sort of “first among equals”, comes with a lot of baggage.

He was the architect of the economy during Dr Mahathir’s first round as Prime Minister and a financial publication had labelled him an “economic wizard”.

No one can deny that he is someone who gets things done – then and now.

PKR politician Lee Chin Cheh pointed out the milestones achieved so far – nine institutional bodies now have to report to Parliament instead of the Prime Minister.

“That is really important because it will lay the foundation for good governance in the years to come,” said Lee.

In hindsight, said lawyer Khaw Veon Szu, the CEP provided the stabilising factor during that critical period after May 9.

“Things were so uncertain. Corporate Malaysia, even the civil service, were at a loss because it had betted so heavily on Barisan Nasional winning.

“Added to that, there were many inexperienced and unfamiliar faces in the new government and you can understand why the council stood out as a reassuring pair of hands,” said Khaw.

Daim’s group provided a psychological centre of gravity as Dr Mahathir grappled with forming his Cabinet.

They took a step back after the Cabinet was formed and focused on gathering feedback.

The CEP has met and listened to some 350 persons from corporate and government figures to NGOs and interest groups prior to handing over its report to the Prime Minister. Some were called multiple times.

The council, said Amir, is arguably the only body today with a panoramic understanding of what Malaysia wants and expects from the new government. The thing now is to translate all these aspirations into policy.

It is a daunting task and Dr Mahathir will need backup to get the work done.

“He will need bodies like the CEP to assist him in the short term but there may be conflict in the long term, especially when Cabinet members become more experienced and start to assert their power,” said Khaw.

The CEP will need to have a proper legal status that makes it less vulnerable to attacks of legitimacy.

Meanwhile, time is of the essence given Dr Mahathir’s two-year commitment at the top.

“His government needs to quickly spell out an economic prescription and a vision for the future,” said Amir.

The approval rating of the Pakatan government has slipped from 87% to 67% in just three months.

Dr Mahathir’s government will want to arrest the downward trajectory.

It is fine for now to harp on 1MDB, Jho Low and his superyacht and super jet to remind voters that they were right to reject the previous government, but scandals cannot remain sensational forever.

In the meanwhile, said Selangor exco member Datuk Teng Chang Khim, it is best to wait for the CEP report to be made public.

“Only then can we give them a fair judgment.” 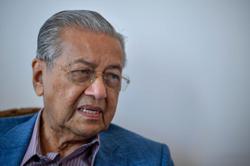