Time not on Anwar’s side

By Everything Seems To Have Gone His Way So Far But Datuk Seri Anwar Ibrahim’s Dream Of Becoming Prime Minister May Be Halted An Anti-hopping Law Now In The Making.

WHEN Datuk Seri Anwar Ibrahim turned 60 last year some thought he was entering the sunset of his political career.

But the milestone year has instead been a major turning point for him.

His party PKR now has the most seats among the Opposition in Parliament, his wife is set to become the next Opposition Leader and his eldest daughter is now an MP.

And he is, by most accounts, planning to join them in Parliament soon. 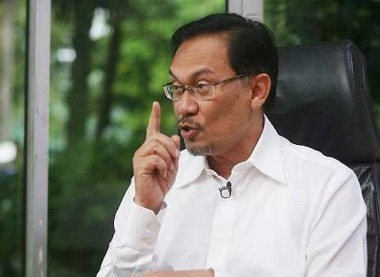 Azmin Ali, his long-time loyalist and now Gombak MP, prefers to take it a step further: “Anwar will be the next Prime Minister.”

A year ago, most people would have laughed in Azmin’s face, but after what happened on March 8, it is best to keep a straight face.

Today is the last day of the five-year ban prohibiting Anwar from electoral politics and the PKR is planning a gathering in Kampung Baru tonight to mark the occasion. Anwar is expected to deliver a strong speech about his future role in the country’s politics.

Morale among the party rank-and-file is sky-high and the most-asked question is whether Anwar can really become the next Prime Minister.

Logically, Anwar has to find his way into Parliament before it can happen. Some had suggested that he take up one of the senatorships available to the states now held by the Pakatan Rakyat.

But a senator is only a member of the Dewan Negara or Senate which has, over the years, become an easy route for some politicians to join the Cabinet.

Anwar’s aim is set much higher. To be Prime Minister, he has to be the leader of the Dewan Rakyat or Parliament. Hence, he would have to force a by-election; and contrary to some reports, a by-election can take place anytime after the general election.

Some think he will contest in Kelana Jaya now held by newbie Loh Gwo Burne, arguably Malaysia’s most famous amateur video maker. But the money is still on Bandar Tun Razak because incumbent Tan Sri Khalid Ibrahim has more than enough on his plate now that he is Selangor Mentri Besar.

Besides, as DAP strategist and Bukit Bendera MP Liew Chin Tong pointed out, Bandar Tun Razak best reflects the Malaysian profile with a voter make-up of 53% Malays, 40% Chinese and 7% Indians and other races.

“Bandar Tun Razak will be easy for him because the Chinese there are the ‘Cheras type’ – very anti-establishment,” said Liew.

Winning a by-election will be the easy part for Anwar. The challenge is getting enough MPs to form the majority in Parliament.

Ethics is not a very popular word in politics, but there are some who are not very comfortable with the idea of forming the federal government through crossovers from the Barisan Nasional side.

PAS politicians, in particular, have been ambivalent about it because their Kelantan Government would have collapsed if any one of their assemblymen had crossed over to Umno after the 2004 election.

“It’s unethical. We have always been against the practice,” said a top national PAS leader.

If it were the Barisan that was doing the enticing, there would have been howls of bribery and money politics emanating from the other side.

Some even think it is equivalent to a political coup d'etat. People who joined PKR because they think it stood for justice, truth and principle, have been silent on the issue or are even compliant with the idea.

“We cannot stop them if they believe in the leadership of Datuk Seri Anwar,” said PKR Youth chief Shamsul Iskander.

The argument is that those crossing over are doing it voluntarily and not out of pecuniary gain but, for goodness sake, who really believes that?

“I have only one word for them – opportunists. Anwar would be cheating voters who had chosen the Barisan Nasional,” said Johor Baru MP Datuk Shahrir Samad.

Opportunities like these do not come very often and the notion of power is probably too seductive to resist for PKR politicians. It is possible that some of them are already fantasising about the Cabinet posts they will be holding.

Anwar is said to have contacted many MPs, and to have a list of potential crossovers. Some have pointed out that he should just do it and not merely talk about it. He is probably waiting till he is sitting in Parliament, or he would only be handing over the top post to PAS.

But time is not on his side. He cannot wait too long because of the anti-hopping law that the Barisan is planning to table. Once the law comes into effect, Anwar will be, at most, the Opposition Leader.

“It is now or never. If he doesn’t get there soon, there won’t be another time for him,” said Liew.

Everything seems to have gone his way so far but Datuk Seri Anwar Ibrahim’s dream of becoming Prime Minister may be halted an anti-hopping law now in the making.