The way to regain public trust

THERE was a time in the not-too-distant past when the people’s trust in our police force was unshakeable. The mere presence of the “mata-mata” evoked fear among crooks.For a few decades after independence, there was no doubting the people’s confidence in the police. Above its vital role in maintaining order, the commitment of the police to uphold the rule of law was unquestioned.

What is the image of the once rock-solid institution today? With corruption within its ranks, it is not a pretty one.

“My first mission is to restore public confidence in the Royal Malaysia Police, to improve the image of the force – a task most tough, ” Tan Sri Abdul Hamid Bador was quoted as saying in his first exclusive media interview after his appointment in May 2019 as Inspector-General of Police (IGP).

He noted that most of the 130,000 police personnel aspired to work to the best of their capabilities but pointed out that there were leadership weaknesses that had led them astray. He added that the image of the force could be restored through integrity, trust and keeping to its noble values.

A year later, the job is still proving to be an arduous one for the IGP.

Last week, 13 cops and five soldiers were arrested over suspected involvement in human trafficking for at least three years.

Nine were from the Kota Tinggi police station in Johor, two from Bukit Aman and two from the marine police. Among them was an assistant superintendent (ASP), reflecting the possibility of a deep-rooted nexus between crooked cops and criminal syndicates.

According to Johor police chief Comm Datuk Ayob Khan Mydin Pitchay, traffickers based in the east coast of the state had been paying the policemen. One was found to have received RM10,000 for each successful smuggling attempt.

The suspects allegedly provided sensitive information to the rackets, including tipping them off on enforcement operations.

Their treachery helped the syndicates to bring in 43,000 illegal immigrants into the country over the past six years and pocket RM43mil in the process.

The IGP’s statement on Saturday gave the impression that the latest arrests were just the tip of the iceberg. He confirmed that dozens of policemen and military personnel had been found to be involved in human smuggling and warned that a massive dragnet was under way.

Those nabbed are likely to be probed under Section 130V of the Penal Code, which targets members of organised criminal groups. They could face between five years and 20 years in jail if found guilty.

Investigations would likely be conducted under the powers of Security Offences (Special Measures) Act (Sosma) 2012.

Five years after the shocking discovery of 29 death transit camps, 147 mass graves of mostly Rohingya and Bangladeshi victims and 130 skeletal remains near Wang Kelian, Perlis, the scourge of human smuggling is still a major problem in Malaysia.

It seems obvious that the death camps at the Malaysia-Thailand border were set up with the knowledge of those in authority on both sides of the porous, forested boundary.

This suspicion is strengthened by a comprehensive probe by a newspaper that revealed evidence suggesting a “massive, coordinated cover-up”.

Unlike in Thailand where top people involved were arrested and charged, no Malaysian has been brought to book over the wrong- doing in Wang Kelian.

The chapter on the horrific findings at the death camps remains open even after a Royal Commission of Inquiry, set up on Jan 29 last year, heard the testimonies of 48 witnesses over 17 days.

In January this year, Tan Sri Muhyiddin Yassin, at the time the Home Minister in the Pakatan Harapan government, said the RCI report would be submitted to the Cabinet for discussion. However, there has been no mention of the matter since then.

Even after the Perikatan Nasional government took over with Muhyiddin as Prime Minister, nothing has been said about the RCI’s findings or whether the report would be made public.

The latest arrests of policemen and soldiers show that the highly lucrative human trafficking trade is still thriving in the country, largely as a result of corruption and the unabated demand for cheap illegal workers.

The police perform a critical function in the criminal justice system, maintenance of peace and security, and enforcement of the rule of law.

The cornerstone of the institution is the trust of the people. To attain and uphold this trust, the force must be free of corruption and sustain the highest standards of integrity and accountability.

For Malaysia, the best way to meet these ideals is through the Independent Police Complaints and Misconduct Commission (IPCMC), mooted 15 years ago by the Royal Commission to Enhance the Operation and Management of the Royal Malaysia Police.

The proposed independent oversight body, aimed at improving professional standards and accountability in dealing with issues such as police brutality, custodial deaths, shootings and cover-ups, has been delayed for far too long.

In 2009, in the face of opposition from within the force, the government formed the Enforcement Agency Integrity Commission instead of the IPCMC.

But it does not have the powers to take disciplinary action against personnel, even after findings of misconduct. So, it is not surprising that transgressions and crimes are still being committed by those in the force.

The IPCMC Bill 2019 was tabled for the first reading in the last Dewan Rakyat in July last year but it was referred to the Special Select Committee at the second reading in October. In December, it was put off once more.

Like its predecessor, the Perikatan government too has postponed it, yet again to review the Bill before bringing it to the Cabinet for a final decision. Will it ever see the light? One can only wonder. 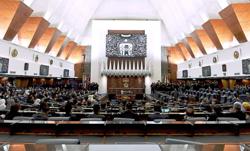 New Bill to replace IPCMC Bill to be tabled on Aug 26, says Hamzah