Tense clash: Lee has taken his shot and the shuttlecock is now in BAM’s court. – AFP

THE last fortnight has not been a good one for Malaysian sports.

My last column covered the government’s controversial decision to drop Low Wee Wern from the national squash programme suddenly and without prior consultation.

The latest at time of writing is that now, badminton players Lee Zii Jia and Goh Jin Wei have been banned for two years from international tournaments by the Badminton Association of Malaysia (BAM).

Netizens were in an uproar, with many drawing comparisons to Loh Kean Yew, who was born in Penang, but eventually made the decision to leave, became a Singaporean citizen, and won the Badminton World Federation (BWF) World Championships.

This last fortnight also saw the public highlighting the plight of former paralympic swimmer and seven time gold medalist Koh Lee Peng, who is now selling tissues on the roadside in her wheelchair.

The most recent heartbreaking issue was the government’s decision not to renew the contract of R. Jeganathan, coach to Ridzuan Puzi, paralympic gold medalist in track and field.

There was a video of Ridzuan in absolute tears, pleading for the man he loved as a father to be reinstated as his coach. How anyone can watch this deeply moving, true embodiment of the #BangsaMalaysia spirit and not be totally heartbroken is beyond me.

Reflecting on these, I start to see a few similarities between sports and politics.

People who are deep in both industries will be acutely aware of very intricate factors at play – power dynamics, interpersonal conflicts, political connections, clashes of egos, mudslinging, arguments over money, and so on and so forth.

But in both cases, what the vast majority of the general public probably want is simply for people to stop bickering, and do what is best for the country.

There’s often not a lot of transparency (and in politics, a lack of transparency can erupt into the type of big protests we saw yesterday), which means many people don’t know all the behind the scenes stories.

Frankly though, most people probably don’t want to know all those stories. Quite frankly, I’m not all that keen to know either.

They say that if a motorcycle gets into an accident with a Mercedes in which the motorcyclist gets hurt, it’s very likely that no matter whose fault it was, people are going to be sympathetic to the motorcyclist.

In this case, I think people are going to sympathise with Lee and Goh, no matter what.

And I don’t really have a big problem with that.

At the end of the day, on one hand, we have athletes who are putting in sweat, blood, and tears, trying to be the best at their game. I haven’t seen anything to suggest that they stubbornly put their personal interests ahead of national interests.

No matter how sidelined and mistreated you feel because of the way your government treats you, I think I can say with some confidence that almost any Malaysian would feel an immense pride in representing Malaysia, and will never give anything short of their best trying to bring glory to their homeland.

On the other hand, we have a bunch of people that the public will probably perceive as petty, bureaucratic officials, trying to bully and exert control over these athletes, because they feel snubbed.

Perhaps these bureaucrats think that the public will support them because they see BAM as some spotless organisation which unfailingly does what is best for the country. They are almost certainly very mistaken.

Everything else being equal, I daresay public sympathy will always lie with the athlete working their hardest and sweating it out every day on the court, instead of with bureaucrats who look like bullies dishing out severe punishment on some of Malaysia’s best hopes.

I’d go so far as to say that that’s my professional opinion as a communications consultant.

The sporting associations structure and ecosystem has long been somewhat controversial. The way all these rules work seem to create a landscape and incentive structure which very, very often does not result in what is best for Malaysian sports.

In this sense, it is quite similar to our Westminster system of politics – a system whose incentive structures do not always produce the type of political behaviour or results that are best for Malaysia’s governance.

When either sports or politics becomes more about clash of egos, money, and sheer inability to compromise and work together, the end result is always disappointing – for both sports fans and voters.

I think in this particular case, the shuttlecock will be in BAM’s court. If they insist on sticking to such harsh and unreasonable measures, we can almost be certain that Loh Kean Yew won’t be the last Malaysian who will refuse to let their career go down the drain because of incompetent bureaucracy. 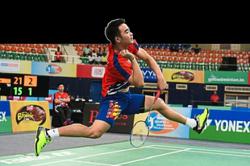 Take a leaf out of Razak’s Green Book
A need for more quality in top sports, not just quantity in medals
Mask up and enjoy the show
Malaysia is entering a serious food security conundrum
Powerful lessons from Bosnia
Before we implode in chronic anger
Give the youth a chance to lead
When the dispute cannot be solved amicably
Review of 2021 electoral reforms
Ignorance is no bliss when it comes to the prostate Premium